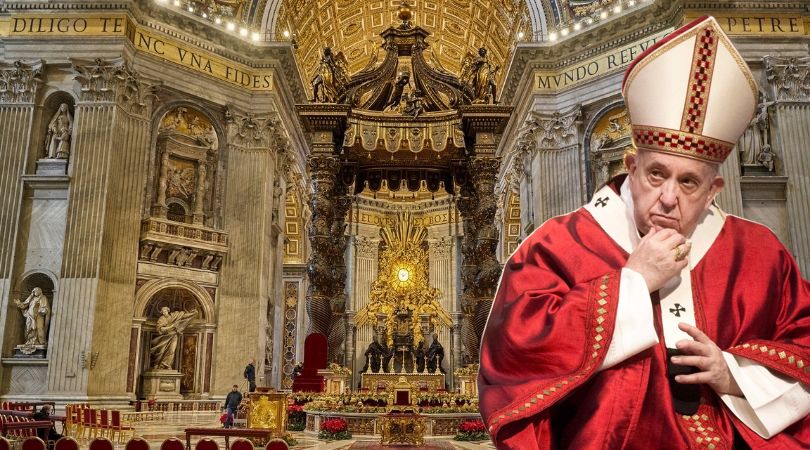 VATICAN CITY (ChurchMilitant.com) - Pope Francis has dismantled the 1,000-year-old venerable institution of the Chapter of St. Peter's Basilica, accelerating his demolition of ecclesiastical and liturgical traditions in the world's most hallowed Catholic shrine.

The pontiff's "transitional norms" radically restructuring the basilica's ancient Chapter — first formalized by the papal bull of St. Leo IX in 1053 — came into force Friday following a decree signed by Pope Francis to "facilitate the start of the reform."

The decree stressed Francis was seeking to "revitalize the service of liturgical activity and pastoral care" carried out by the Chapter's canons mainly on Sundays and holy days.

Observers note that the reforms aim to drastically cut the number of Masses to two a day. Both Masses will be in Italian and broadcast by the Vatican media, thus freeing up space for tourists and other activities in the basilica.

The new decree strips the Chapter almost entirely of any power of managing the basilica and entrusts the management of finances related to the Treasury Museum and the sale of religious objects to the Fabric of St. Peter's — the office which manages St. Peter's Basilica.

Henceforth, in a cost-cutting exercise, the 34 priests comprising the Chapter will be "hired" by the Fabric of St. Peter's — who will pay them a fee.

The Chapter of St. Peter's is composed of the archpriest, the vicar capitular, canon priests and coadjutor priests who pray the Divine Office and preside at the daily Chapter Eucharist in the basilica.

Vatican watchers reacted with alarm, one noting that "centuries of illustrious history will in fact (but hopefully only for a year) be nullified. Deleted. Humiliated."

The Messa in Latino blog, which broke the story of Francis preparing to impose draconian restrictions on the Latin Mass, warned that the Chapter "will in fact be emptied of its sacred and peculiar divine and liturgical office of assistance to the celebrations of the Holy Father."

No pontiff in living memory has ever issued such directives.

Thus far, the title of basilica canon was conferred on illustrious and meritorious priests, Messa in Latino noted, lamenting that Francis was bulldozing this esteemed office and reducing the chapter to function as honorary chaplains.

A top Vatican cleric and academic told Church Militant "the current so-called reforms are inextricably linked to the turmoil that has engulfed St. Peter's over the last year or so, including Francis' canceling private Masses and pushing the Latin Mass underground."

"This was to be expected," the priest remarked. "This is further evidence of how destructive the current pontiff and everything around him is."

Cardinal Mauro Gambetti, archpriest of St. Peter's told L'Osservatore Romano the reforms were intended to "meet the new needs of spiritual hospitality of pilgrims, but also of simple tourists, who have resumed filling the aisles of the Petrine naves."

Francis' goal is to "gradually restructure the constitution of the Chapter and its work so that it can increasingly meet the new questions of the faithful and visitors," Gambetti explained.

This would "bring people as close as possible to the sacredness of the place, to the meanings it holds, and can also make the love and attraction for beauty grow and develop, the beauty of the liturgy above all, but also of art," he added.

The "growing demand for spirituality" made it "necessary to rethink the way in which the person of Jesus is presented" in "a language that can be decoded by the listener" as visitors come to St. Peter's and rediscover "contact with the transcendent," Gambetti said.

This is further evidence of how destructive the current pontiff and everything around him is.

The archpriest pointed to a "rethinking" of the Chapter's role in liturgical services like Holy Mass and the Daily Office. He also claimed a need to revisit "the language of celebration in this international place so that it touches the hearts of those who participate and does not remain a distant thing."

According to Messa in Latino, Francis' began chipping away at St. Peter's Chapter in May 2020 by first exempting and excluding it from the "obligation of choir" and Chapter celebrations under the pretext of the Wuhan virus pandemic.

In March 2021, an unsigned Secretariat of State memo abolished "individual" Masses — regularly offered by the canons and celebrated at side altars in St. Peter's Basilica — and restricted the Latin Mass to a single altar in the basilica's crypt, Church Militant reported.

Two months later, Italian newspaper Il Messaggero revealed that the Chapter's canons were banned from entering St. Peter's Basilica to join Pope Francis in the recitation of the Rosary.

"The inexplicable prohibition caught the canons off guard and brought to the surface an anomaly," Il Messaggero reported, "because no pontiff in living memory has ever issued such directives, given that the canons have the institutional task of being next to the pontiff and performing liturgical services during celebrations."

The inexplicable prohibition caught the canons off guard and brought to the surface an anomaly.

The newspaper noted the canons had been "in the sights of Pope Francis" for some time and on one occasion when the pontiff spotted two canons in their fuchsia-colored robes he even asked "in amazement" who "those two priests dressed in technicolor were."

A June diktat from Gambetti ordered Holy Mass to be celebrated in Italian, with readings and prayer of the faithful in various modern languages, while the Kyrie, Gloria, Sanctus, Pater Noster and Agnus Dei would be in Latin.

Great History Grinding to a Halt

Pope Benedict XVI affirmed the Chapter of canons and coadjutors appointed by the Holy Father as "the uninterrupted presence of clergy praying in the Vatican Basilica since the time of St. Gregory the Great."

Reiterating the words of then-archpriest Abp. Angelo Comastri, Benedict noted in a 2007 address that the Chapter had offered "a continuous, deliberately discreet but faithful and persevering presence."

Benedict commended the Chapter's wide-ranging activities, from organizing daily Masses and managing the patrimony of the Basilica and its affiliated churches to pastoral work in the Borgo district and charitable activities in collaboration with Rome's Holy Spirit Hospital.

During the pontificate of Eugene III (1145–53), the Chapter acquired the characteristics of a well-structured and autonomous community and from the 11th century to this day, at least 11 popes have belonged to the Vatican Chapter, Benedict observed.