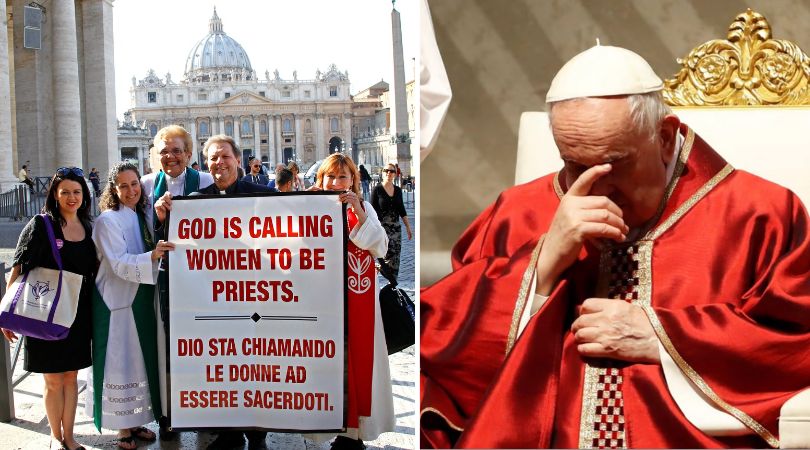 VATICAN CITY (ChurchMilitant.com) - Pope Francis has firmly slammed the door on admitting women to holy orders on the grounds that women's ordination constitutes a "theological problem" and a violation of the "Petrine principle."

In an interview published Monday with left-wing Jesuit magazine America, the pontiff categorically stated that a woman "cannot enter ordained ministry … because the Petrine principle has no place for that."

The pope was responding to a question that asked what he "would say to a woman who is already serving in the life of the Church but who still feels called to be a priest," especially since "many women feel pain because they cannot be ordained priests."

Francis stressed that focusing exclusively on "the ministerial dimension of the life of the Church" or the "Petrine principle" of the "ordained ministry" would be to "amputate the being of the Church."

Instead, the "Marian principle, which is the principle of femininity in the Church, of the woman in the Church, where the Church sees a mirror of Herself because She is a woman and a spouse," was "still more important" but sadly ignored, the pope explained.

Francis said the Church had failed "to develop a theology of woman that reflects" the "Marian principle, which is that of the spousal Church" and had neglected to explain through catechesis how a woman "looks more like the Church, which is mother and spouse."

"Therefore, that the woman does not enter into the ministerial life is not a deprivation. No. Your place is that which is much more important and which we have yet to develop the catechesis about women in the way of the Marian principle," Francis reasserted.

In addition to the Petrine and Marian principles, the Church also upheld the "administrative principle, which is not theological but is rather that of administration, about what one does" and which could include women even at the highest levels, Francis noted.

"Two years ago, I appointed five women among the six laypersons, and that was a revolution. The deputy governor of the Vatican is a woman," Francis added. "When a woman enters politics or manages things, generally she does better."

"Many economists are women, and they are renewing the economy in a constructive way," alluding to his recent controversial appointment of the pro-abortion atheist economist Mariana Mazzucato to the Pontifical Academy for Life.

On Friday, Francis appointed Dr. Raffaella Giuliani as secretary of the Pontifical Commission of Sacred Archeology and Antonella Sciarrone Alibrandi as undersecretary of the Dicastery for Culture and Education.

The heterodox Women's Ordination Conference, which campaigns for priestesses in the Catholic Church, released a statement attacking Francis for upholding the Church's "unequal treatment of women by exploiting misogynistic metaphors to dismiss the sincerely discerned vocations of women."

The WOC press release blasted Francis' "simplistic gendering and sexualization of one's relationship with God and discipleship" as "a disservice to the Catholic imagination" and a "tool of oppression."

The pope's "claim that the exclusion of women from ministerial life is 'not a deprivation' reflects a man who does not know the depth of pain that women in his own Church carry," WOC argued. "He shows willful ignorance to the treasures that have been lost by denying the sacramental gifts of more than half its members."

"It is only when women claim their authentic call to priesthood that the spousal metaphor becomes the central ecclesiology of the Church," the radical feminist organization insisted.

WOC also blasted Francis for turning a deaf ear to last month's "Working Document for the Continental Stage" of the Synod on Synodality, "which acknowledged global calls for women's ordination and a collective longing for women in ministry."

Two years ago, I appointed five women among the six laypersons, and that was a revolution.

"Yet today, Francis' reductive understanding of women's ministerial gifts rings hollow beyond measure and discordant with synod reports from around the world," the statement lamented.

"The synod implores the global Church to 'enlarge the space of your tent,' yet today we read the words of a man who would rather build walls out of bad theology than make room for women as equals in Christ," the WOC missive concluded.

"As far as the ordination of women is concerned, for example, [the Vatican's] view is very clear, that the question is closed. But the question exists, and it has to be elaborated and discussed," Bätzing insisted.

"Popes have tried to say the question is closed, but the fact is that the question exists. Many young women say 'a church that refuses all of this cannot be my church in the long run,'" Bätzing said. "All these questions are on the table and all attempts of cancel [sic] them will not have success." 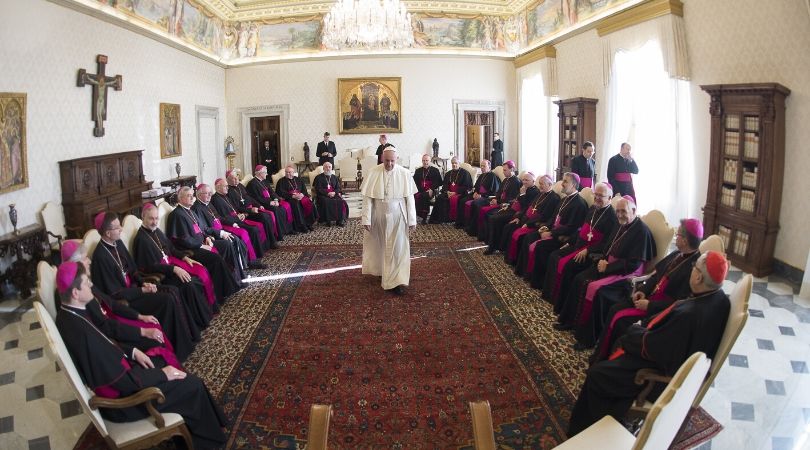 German Bishops: Out With Old Church, In With New
By Martina Moyski   •   0