In the face of major backlash, president doubles down on hosting controversial cardinal

STEUBENVILLE, Ohio (ChurchMilitant.com) - In spite of backlash from Catholics, Franciscan University of Steubenville (FUS) is doubling down on plans to host Cdl. Blase Cupich at an upcoming conference.

"For some people who have contacted me, understanding that Franciscan University had no say in which bishops were invited provided greater clarity and has alleviated their concerns," wrote Fr. David Pivonka, FUS president, in a letter Thursday responding to criticism. "For some, it didn't matter."

Fr. Pivonka: 'I don't believe the Lord wants me to decide whether or not we should welcome this or that bishop.'

"Yet, bishops receive their authority from Christ and unless that authority is officially taken away from them, I don't believe the Lord wants me to decide whether or not we should welcome this or that bishop," Pivonka explained, justifying his rejection of calls from a number of Catholics to disinvite Cupich.

Predicting a protest on campus during Cupich's talk, the president wrote, "If a bishop is on the campus of Franciscan University, as 40 bishops will be over the next several months, I pray we will always treat them with the respect, charity, and mercy that Christ commanded."

Steubenville faced outcry after Church Militant reported that Cupich would be a featured speaker at Voice + Vision: The National Summit for Ministries with Youth and Young Adults, scheduled for July 31–Aug. 2. The Chicago cardinal is in fact pictured first in the speaker lineup.

His planned presence has resulted in a flood of emails and phone calls from angry students, alumni and supporters, including one longtime donor of 25 years who is demanding that his money be returned to him, even threatening to sue if FUS fails to do so.

One letter obtained by Church Militant, written by a young graduate of FUS, said, "I am appalled and ashamed that you would invite Cardinal Cupich to come for the conferences. He is a horrible prince of the church and has allowed too much evil to happen in the church."

He went on to blast Cupich as "a weak man that is part of the homosexual mafia [and] doing nothing to stop the problems in the church," adding, "He … silences anyone, even priests in his diocese, that opposes the gay agenda."

Cupich is a well-known proponent of the homosexual agenda and has been accused of concealing clerical sex abuse. He also supports giving Holy Communion to pro-abortion politicians and active homosexuals. 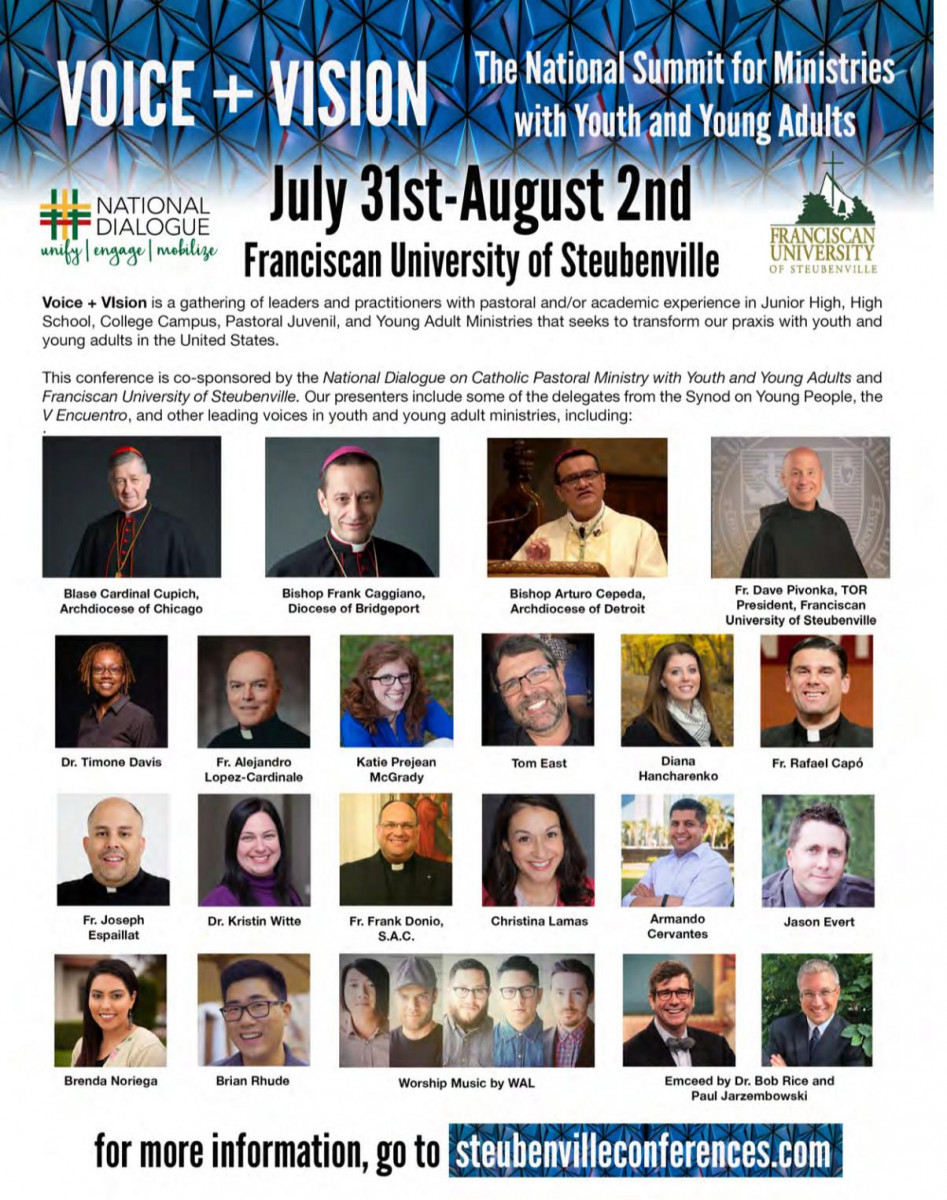 Dr. Bob Rice, FUS director of masters of arts in catechetics and evangelization, clarified in early July that FUS was not responsible for inviting Cupich: "The short answer is, we didn't invite him," he told the upset alumnus.

Because Voice + Vision "is the first national conference on Christus Vivit, the USCCB invited all the bishops who represented the United States in the Synod for Youth," Rice explained.

Even so, Catholics called on FUS to draw a line in the sand and disinvite Cupich. If not, a number of comments online indicate a protest will take place by students, alumni and supporters to express their outrage at the controversial cardinal's presence on campus.

A recent poll resulted in Cupich being voted the "worst" bishop in the United States. A petition demanding the Chicago prelate's resignation has garnered almost 45,000 signatures.

Thank you for your email. It shows me how much you care about Franciscan University, and so I would like to explain the origins of the Voice + Vision Conference.

I prayed as I wrote this, asking the help of the Holy Spirit to speak with clarity and truth—and I ask you to please pray as you read it.

This response may be longer than you expected, but I think matters of grave importance, such as this, deserve more than a sentence or two or a quick reply in Facebook comments or on Twitter.

Seventy-five percent of Catholic youth who are going to Mass when they are 18 will stop going to Church before they are 25. Let that sink in—75 percent! And this does not include youth who are not going to Mass at all. We, all of us, must come together to help them. It really is a battle for the souls of our youth. This battle has eternal consequences, and we must have an eternal perspective.

And who is this battle against? Who is the enemy? We can often struggle with this question. As St. Paul reminds us, this is a struggle against principalities and dominions of darkness, not flesh and blood (see Ephesians 6: 12).

To fight this enemy in this battle and turn the tide in the crisis of faith in our youth, several national groups have come together in the National Dialogue. Franciscan University is one of the few colleges in the country that belongs to the National Dialogue, which consists of groups doing significant work toward the evangelization and catechesis of our youth. We are blessed to be a voice of clarity, orthodoxy, and zeal for souls, and I can't imagine this discussion, this battle, going on without the assistance of Franciscan’s faculty and staff experts and many decades of experience bringing the Gospel to teens and young adults across North America.

When the National Dialogue felt the need for an academic conference to discuss, study, and pray about the many problems facing our youth, it was decided that Franciscan University would host this important gathering.

To be clear, this is not a conference for youth; this is a conference for people who are impacting and working toward evangelizing our youth. The various groups involved had the opportunity to invite leaders to participate in this conference at which difficult topics will be discussed and debated. The United States Conference of Catholic Bishops invited bishops who participated in last year’s Rome Synod on Young People to attend. This included Archbishop Chaput, Bishop Barron, Archbishop Gomez, Cardinal DiNardo, and Cardinal Cupich.

For some people who have contacted me, understanding that Franciscan University had no say in which bishops were invited provided greater clarity and has alleviated their concerns. For some, it didn't matter.

Yet, bishops receive their authority from Christ and unless that authority is officially taken away from them, I don’t believe the Lord wants me to decide whether or not we should welcome this or that bishop. If a bishop is on the campus of Franciscan University, as 40 bishops will be over the next several months, I pray we will always treat them with the respect, charity, and mercy that Christ commanded.

With that being said, our bishops are going through a very difficult, purifying time. Sadly, they have brought much of this on themselves. I, along with so many, have been profoundly disappointed by the troubling revelations about some of our bishops. However, I believe this is a time to engage them, serve them, and pray for them. I pray that God uses Franciscan University as a witness to the Gospel and Catholic orthodoxy that brings a deeper conversion to all who come here, be that the most hardened 17-year-old, the most broken, lost priest or deacon, and yes, even our bishops. I believe this is the way of Jesus.

I also believe Franciscan University is in a particularly graced place and time, and I am happy we are part of this national discussion on how we can help save our youth. It’s imperative that we engage everyone on this issue. We can’t isolate ourselves. People from all over the country and the world are looking to Franciscan University to lead on so many issues. I don’t believe we can merely hide in “the city on the hill.” Rather, we must engage.

This, too, was the way of Jesus. He reached out to those who disagreed with him and those who were sinners, and he challenged them, as he challenges us, to be converted. This was also the way of St. Francis. He told his brothers, “The world will be our cloister,” and he embraced the sinners and lepers the rest of the Body of Christ had dismissed. When St. Francis embraced the outcasts, he encountered Jesus. This is my prayer as well.

Again, I thank you for your email and for your support of Franciscan University in the past. You and your intentions will continue to be in our prayers, and I hope you will continue to walk with us in this most difficult time when our youth need us the most. More than ever, our culture needs the voice of the Gospel and Catholic orthodoxy, and Franciscan University is fully committed to this. I ask that you don’t stop praying for us. We are on the frontline and need your prayers more than ever. Your prayers have been and will always be what we need the most.