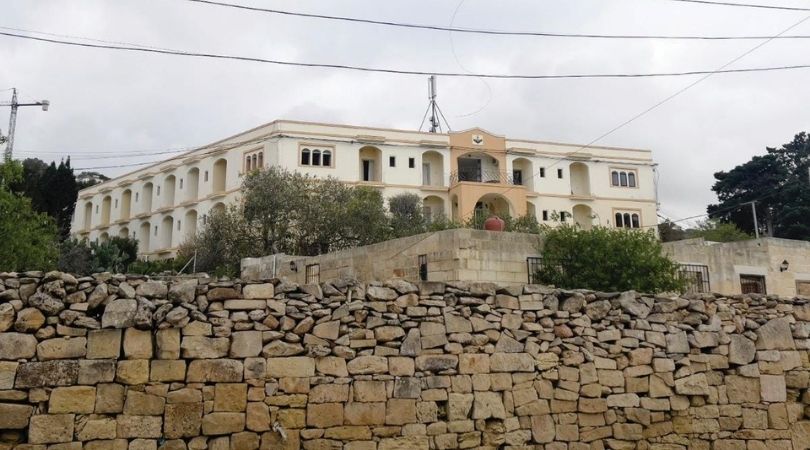 MADLIENA, Malta (ChurchMilitant.com) - Developers have demolished a much-loved retreat house after Malta's Franciscans sold it to them for 30 million euros.

The lucrative deal has infuriated local Catholics, and the order's former minister provincial, Fr. Richard Stanley Grech, has taken the unprecedented step of publicly disassociating himself from the project.

"What will be built instead will be a glaring monstrosity, a monumental eyesore and reminder for years to come of our hypocrisy, our shame and our betrayal as Franciscans," Grech wrote Friday in the Times of Malta.

The two-story Porziuncola Retreat House, the first of its kind on the predominantly Catholic island, will be turned into a six-story, 200-room home for the elderly.

The retreat center was named after the chapel of the Virgin Mary of the Angels, where St. Francis of Assisi discovered his evangelical calling in 1208 and committed himself and his friars to living a life of absolute poverty.

We lost all credibility for the sole sake of money.

"We have absolutely nothing to be happy for or be proud of. We are no longer qualified to uphold and champion the Franciscan values of justice, peace and integrity of creation," Grech wrote, describing the demolition as "despicable."

"We lost all credibility for the sole sake of money. What we did is diametrically opposite to the very fatherly words of His Holiness Pope Francis when he was among us just a few weeks before," Grech stressed.

Chapel of the Virgin Mary of the Angels, Porziuncola, in Assisi

"No amount of reasons or excuses brought forward by anybody can ever justify this infamous and heinous act," the Franciscan excoriated. "The end, no matter how good one might try to paint it, never justifies the means."

During his April visit to Malta, Francis condemned the "rapacious greed" of land speculators, saying their "avarice" risks "compromising not only the landscape but the very future." The pope's words have been interpreted by many as a warning to Malta's archbishop, Charles Scicluna, who is currently embroiled in a land-grab scandal, as Church Militant earlier reported.

It is worrying that we Maltese Catholics have abandoned traditional ways of family life.

President of Pro Malta Christiana Dr. Philip Beattie told Church Militant "the area where Porziuncola House is situated was defined in the official 2006 zoning plan to be an area for a 'religious retreat,' which strictly prohibited any change of use. Hence, this development contravenes local planning guidelines."

Beattie, an economist, said he was a frequent visitor to the retreat center when he lived in the village of Baħar iċ-Ċagħaq, just down the road from Porziuncola House.

"The local Franciscans also ministered to our spiritual needs by celebrating Mass daily in my village's chapel. This development saddens me," he lamented. "It now appears that my village of Baħar iċ-Ċagħaq and the surrounding area of Madliena will be bereft of a Franciscan presence after so many years."

Beattie noted the development of the six-story home for the elderly was "symptomatic of how Maltese society no longer cares for our parents and grandparents within our homes."

"In principle, there is nothing intrinsically wrong in homes for the aged, but it is worrying that we Maltese Catholics have abandoned traditional ways of family life," he added.

In March, locals protested outside the Porziuncola Retreat House with placards saying "stop the uglification" and "stop the abuse." Locals also accused developers of obtaining planning permits through "tricks, deceit and by ignoring the rules that everybody else has to observe."

Developer Paul Attard of the GAP Group and the project's architect, Colin Zammit, have been involved in several controversial projects that raised similar questions, the locals charged.

In February, Fr. Anthony Chircop, the Franciscans' current minister provincial, said the retirement home project had been given the go-ahead by the order's heads in Rome and was due to receive the final go-ahead from the Vatican.

No excuse can ever justify this infamous and heinous act.

Chircop initially planned to turn the third floor of the retreat house into a retirement home for elderly friars, he said. Instead, the order granted the building to a developer for a 65-year lease.

In January, residents of Gozo — the second largest of the Maltese islands — protested outside the diocesan curia, asking Abp. Charles Scicluna to stop allowing ruthless speculators to ruin their lives and the environment.

Gozitans, led by the nongovernmental organization Moviment Graffitti, have publicly demonstrated for months against Scicluna's multimillion-euro land deals that paved the way for apartment blocks.

The pro-LGBTQ+ Scicluna is expected to replace 77-year-old conservative Cdl. Luis Ladaria as prefect of the Congregation for the Doctrine of the Faith — the Vatican's doctrinal watchdog.

Church Militant contacted Fr. Chircop for comment but received no response as of press time.