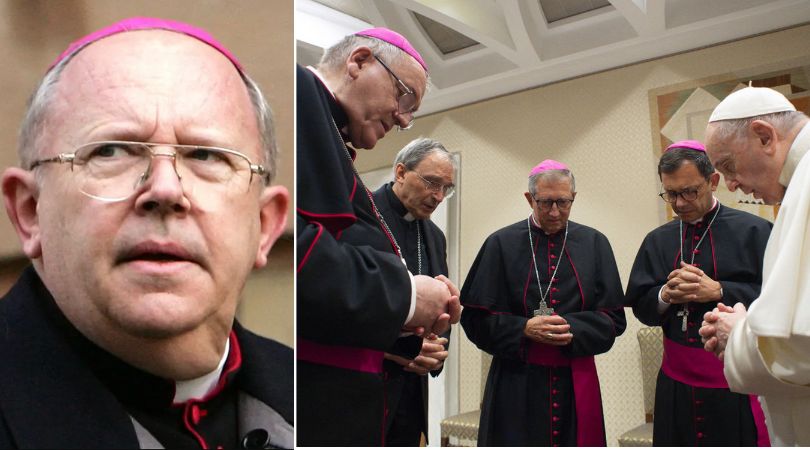 Historian analyzes crisis as Mass-going plummets from 97% to 2%

LOURDES, France (ChurchMilitant.com) - A leading French cardinal and 11 bishops have been accused of sexual abuse and cover-up, a day after Pope Francis hinted that new cases of clerical predation had come to light.

The French bishops' conference revealed Monday that 78-year-old Cdl. Jean-Pierre Ricard admitted to abusing a 14-year-old girl when he was a priest 35 years ago in the diocese of Marseille.

"I behaved in a reprehensible way," Ricard confessed in a letter read at a news conference by Abp. Éric de Moulins-Beaufort, the current president of the bishops' conference. "My behavior has necessarily caused serious and lasting consequences for this person."

"I have decided not to keep my situation secret any longer, and to put myself at the disposal of justice, both on the level of society and on that of the Church," the cardinal wrote, because "what comes first is the suffering experienced by the victims."

The meeting of the French bishops in Lourdes from Nov. 3–8 was rocked by revelations of clerical predation, as Moulins-Beaufort told reporters that 11 bishops, all retired, have been or are to date implicated in cases of abuse.

The archbishop said that the bishops had received Cdl. Ricard's confession "as a shock," given "the esteem in which he is held by us who elected him twice as our president and who witnessed his episcopate in Grenoble, Montpellier and Bordeaux."

Everything is transparent now, and we are moving forward on this.

Moulins-Beaufort named only Cdl. Ricard and Michel Santier, former bishop of Créteil, who engaged in "striptease confessions" in the 1990s when he was a charismatic priest in the diocese of Coutances (Manche).

Earlier, the Vatican and the French bishops said that Santier had resigned for health reasons, even though Pope Francis had secretly punished the bishop by committing him to a "reclusive life of prayer."

On Sunday, as Francis was flying back from his apostolic journey to Bahrain, a French reporter raised the issue of Santier's cover-up and asked the pontiff whether the culture of secrecy should change and canonical penalties should be made public.

Francis did not directly answer the question but insisted, "Everything is transparent now, and we are moving forward on this; that is why we should not be surprised that cases like this come to light."

"Now the case of another bishop comes to mind, there are cases you know ... ?" the pope added, admitting that he had "received two complaints in recent months about cases of abuse that had been covered up and not judged well by the Church."

Last year, a report from an independent French commission found that 3,000 clerics and pastoral workers had abused more than 200,000 minors over the past 70 years.

The abuse revelations follow a historical analysis of the catastrophic collapse of the French Catholic Church by French historian Guillaume Cuchet, professor of history at the University of Paris 1 Panthéon-Sorbonne.

In his book Comment notre monde a cessé d'être chretien: Anatomie d'un effondrement (How Our World Stopped Being Christian: Anatomy of a Collapse), Cuchet shows that the collapse of Catholicism in France dates precisely to 1965.

Cuchet cites research by Canon Fernand Boulard, who refers to 1965 as the time of the "ideological sanctuarization of the Second Vatican Council." The historian demonstrates how the practice of confession, baptism and extreme unction also dropped drastically from 1965.

"Where can this rupture, since rupture there was, possibly have come from? There must have been an event behind a phenomenon of this magnitude, at least to provoke it. My hypothesis is that it was the Second Vatican Council," Cuchet writes.

Cuchet invokes a principle from philosopher Théodore Jouffroy, who argues that changes in official teaching turn ordinary Catholics into skeptics since they conclude that an institution that admits to having been wrong yesterday may well be wrong today.

The historian also identifies the "sudden silence" in homilies on the Four Last Things (death, judgment, Heaven and Hell), which gave the impression that the clergy had either stopped believing in them or no longer knew how to discuss them.

My hypothesis is that it was the Second Vatican Council.

Cuchet underscores "a collective exit from the culture of obligatory practice under pain of mortal sin," which no longer made demands in practice on Catholics to keep the Eucharistic fast, practice abstinence, confess at least once a year and receive Holy Communion at Easter.

The permission to anticipate Sunday by attending Mass on Saturday evenings resulted in the desacralization of Sundays and the focus of Catholics then shifted to leisure activities on Sundays, the historian laments.

It was the "false good pastoral ideas" of the clergy in implementing the initiatives of Vatican II that triggered the Church's decline, Cuchet concludes.