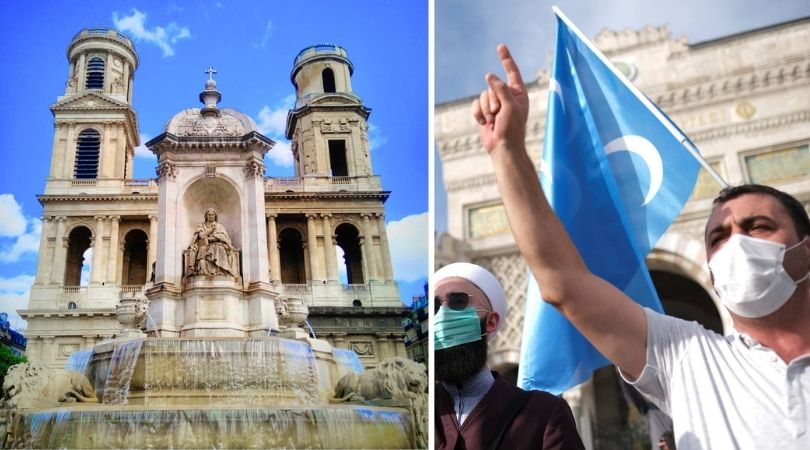 PARIS (ChurchMilitant.com) - Paris' largest Catholic church has welcomed Muslims from an extremist mosque owing allegiance to a radical Islamic sect banned by Saudi Arabia and under investigation by European intelligence agencies for links to terrorism.

Omar Mosque made international news after the French government arrested and deported its president, Muhammad Hammami, a Tunisian imam, in 2012 for preaching violent jihad and anti-Semitic hatred and calling for adulterous wives to be whipped to death.

The mosque's current imam is Hamadi Hammami, the son of the expelled preacher.

Tablighi Jamaat is a secretive movement that "has long been directly involved in the sponsorship of terrorist groups," as per geopolitical analyst Alex Alexiev.

In December 2021, Saudi Arabia banned Tablighi Jamaat, calling it a "danger to society" and "one of the gates of terrorism, even if they claim otherwise." The movement is also banned in Iran, Russia, Kazakhstan, Tajikistan, Turkmenistan and Uzbekistan.

Faithful Catholics responded with outrage after a video of Bp. Georges Pontier praying and singing with the Islamic choir from the extremist mosque was released on French social media. Pontier is currently the interim apostolic administrator of the archdiocese of Paris.

No Muslim authority would have Christians sing the gospel in a mosque.

Later in the week, Catholic youth knelt on the steps of Saint-Sulpice to offer a Rosary of reparation for the desecration of the church — where Koranic texts explicitly denying the incarnation of Jesus and declaring the supremacy of Islam were chanted.

A briefing paper titled "Tablighi Jamaat and Its Role in the Global Jihad" notes that the sect is the largest Islamic movement (it's currently operating in at least 165 countries) and that it advocates an "ultra-rigorous vision of Islam" that "has as its raison d'être [goal] da'wa [Islamic proselytization]."

The movement's long-term goals are to establish an Islamic regime and make Shariah law universal through a comprehensive Islamization of their host countries' societies, a 2019 German intelligence report warned.

A 2018 French intelligence report concluded the sect was one of the movements constituting "the ultimate risk" — in the form of "an advent of a counter-society on national territory."

The Saint-Sulpice episode shows how fragile the missionary proclamation of the Church remains.

Liberal French newspaper Le Figaro labeled the movement a "gateway to terrorism," and French intelligence warned that the sect is the "antechamber of fundamentalism" — given that around "80% of Islamist extremists have come from Tablighi ranks."

On Saturday, leftist journalist Laurent Grzybowski slammed critics after bragging on Twitter he was one of the supporters of the Catholic–Muslim event. Last year, Grzybowski launched a petition protesting the closure of the pro-LGBT+ Saint-Merry pastoral center in Paris.

The Catholic Service of the Archdiocese of Paris for Relations With Islam recognizes the Omar Mosque on its website as "very conservative" and "belonging to the Tablighi Jamaat" movement, noting it is one of the largest mosques in Paris, with a seating capacity for 700 worshippers.

"Alas, the Saint-Sulpice episode shows, once again, how fragile the missionary proclamation of the Church remains and how its durability is endangered," Fr. Danziec lamented in a column for French weekly Valeurs Actuelles.

"Leaving aside the undeniable fact that no Muslim authority would have Christians sing the gospel in a mosque, one senses the swindle of such an event," Danziec wrote. But at Saint-Sulpice, under the pretext of opening doors, "the dogmatic framework and the foundations of faith were torn down," he said.

The movement's long-term goals are to establish an Islamic regime and make Shariah law universal.

"The faithful are voting with their feet, deserting the foul antics that are being forced upon them. How can you blame them?" the priest added, noting that the video clips of the event in Saint-Sulpice, now circulating on the Internet, are "absolutely startling with naivety."

"We eagerly await the opening of a prayer space at the Great Mosque of Paris so that Christians can pray for their persecuted brothers in the East," tweeted Gilbert Collard, member of the European Parliament.

"Muslim radicalism and the persecution of Christians in certain countries are, unfortunately, realities that must be denounced, but they must not prevent a work of collaboration with the many Muslims who are not marked by this radicalism," a rebuttal posted on Saint-Sulpice's website argued.

Police raided the Omar Mosque in October 2020, resulting in an outcry from over 100 French mosques. The mosques claimed that France was discriminating against Muslims.

The mosque is close to the office of the satirical magazine Charlie Hebdo — attacked in 2015 for publishing cartoons of Muhammad, the "prophet" of Islam. Jihadis killed 12 journalists and injured 11.

A 2019 German intelligence report said that several factors justify monitoring Tablighi Jamaat as a potential threat in the context of "Islamist extremism/Islamist terrorism."

The parish priest of Saint-Sulpice, Fr. Henri de La Hougue (an Islamic scholar who organized the event), did not respond to Church Militant's request for comment.