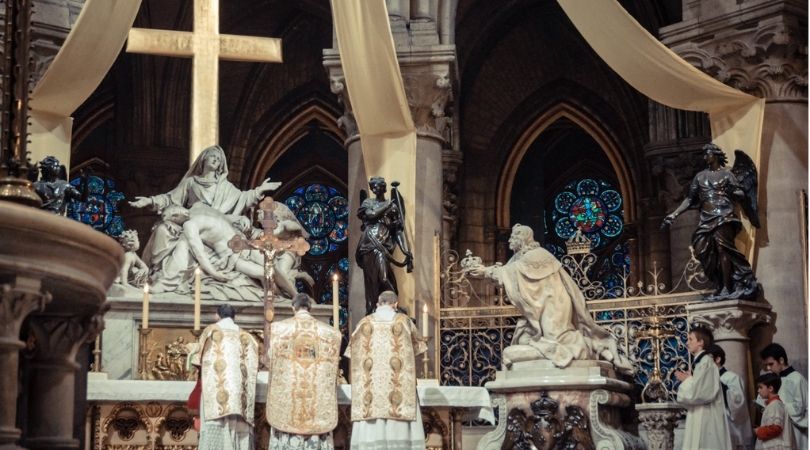 PARIS (ChurchMilitant.com) - French bishops have submitted to the Holy See a devastatingly "contemptuous" appraisal of the Latin Mass, warning the Vatican "not to extend the celebration" of the Extraordinary Form (EF).

Responding to a 2020 Congregation for the Doctrine of the Faith (CDF) questionnaire sent to bishops worldwide, the French Episcopal Conference (CEF) has condemned as scandalous the members of the Church who participate exclusively in the Latin Mass.

Such Catholics remain frozen in an "idiosyncratic conception of the Church" that rejects Vatican II, criticizes Pope Francis and is "hostile to a Church that is too open," the bishops contend.

Stressing the need to "appease" traditionalists, the bishops grudgingly concede that the EF creates a "sense of the sacred," promotes silence, interiority, solemnity, valorizes faith in the Real Presence, preserves the heritage of sacred music and makes the "sacrificial dimension of the Mass more explicit."

The CEF review agrees that the EF could play a role in dialogue with oriental Churches and that "celebrating ad orientem (facing east) can be an antidote to the risk of clericalism."

Nevertheless, the bishops argue that Latin Mass engenders a "mentality of resistance" creating communities critical of the "conciliar Church," resulting in "two Churches" — in a "parallel Church" where "the Eucharist that should gather separates" and "generates two worlds which have a difficult time understanding each other."

It is doubtful that Pope Francis will follow the French bishops on this ground, quite simply because the subject does not interest him.

There is "no participation in diocesan life," and Latin Mass adherents remain aloof from diocesan celebrations, remaining "on the fringes of the diocese," thus creating an "experience of separation at the heart of diocesan unity," the bishops' review alleges. Moreover, doctrinally, "Little is mentioned of the Holy Spirit," according to the CEF.

Noting that "fragile, identifiable youth are easily fascinated by the EF" and "reinforced in their obsessional fever by mediocre preaching and social networks," the bishops ask: "Why is there such a craze, especially among young people for the EF — the scrupulous form?"

It's clear that the "French bishops recognize that the EF has a special attraction for young people, young priests and young families," Joseph Shaw, chairman of the Latin Mass Society for England and Wales, told Church Militant.

"These are groups in short supply in the French Church as a whole, and, as we know from other sources, the number of EF celebrations continues to grow, so this is a real sign of hope," Dr. Shaw noted.

Some French bishops complain that EF congregations are isolated from the rest of the Church. Those bishops who report that they regard these young people with suspicion, resist their requests and criticize this form of the Mass should consider the consequences of their attitude: One cannot marginalize something and then complain it is marginalized.

Meanwhile, Una Voce, a French liturgical association primarily involved in promoting Gregorian chant, slammed the the CEF's attempts to smear the application of Pope Benedict XVI's Summorum Pontificum — the canonical ruling granting greater freedom for priests to use the Tridentine Liturgy in its 1962 form.

Why is there such a craze, especially among young people, for the Latin Mass?

In his latest editorial, Patrick Banken rips the CEF's 10-page review, which is "stuffed with spelling and syntax errors," as well as its "jargon — that is to say double Dutch or gibberish."

But we would gladly forgive them for their clumsiness if there was the slightest trace of empathy, cordiality or "heart" in them as they say in the first place. Instead, we find contempt, at best indifference, towards those narrow-minded beings, without theology, without charity, that are the faithful to the ancient Latin Mass.

In an interview with Le Rouge & le Noir gazette, Fr. Claude Barthe, chaplain of the Summorum Pontificum international pilgrimage, identifies the existence of "a powerful pressure group very hostile to the 'privileged' status of the traditional Mass."

The bishops' negative interpretations "systematically minimize" the positive findings on the Latin Mass, he notes, adding: "One is left speechless by the conclusion that the EF is not missionary when we know that the parish Masses are always more deserted, while traditional Masses are full of young people and a not insignificant number of converts.

"It is doubtful that Pope Francis will follow the French bishops on this ground, quite simply because the subject does not interest him," Fr. Barthe hopes.

The French bishops recommend that some seminarians should be trained to celebrate the Latin Mass to get rid of dependency on special institutes (e.g., the Priestly Fraternity of St. Peter) that "celebrate exclusively in the Extraordinary Form" and at whom the review lobs severe criticism.

The CEF also notes that offering the Latin Mass potentially stops Catholics from joining the schismatic Society of St. Pius X (SSPX) but fails to bring back faithful from the SSPX, even when the Latin Mass is offered by a church close to an SSPX parish.

Practically all bishops stress the importance of having the same lectionary, the review concludes, pleading that "the defiance of the Second Vatican Council and its orientations" by Latin Mass communities "ultimately raises ecclesiological rather than liturgical questions."