FRESNO, Calif. (ChurchMilitant.com) - Local Catholics in the diocese of Fresno, California are outraged over a workshop on homosexual inclusion during the 2018 Fresno Diocesan Congress. In a letter to Bp. Armando X. Ochoa, Fresno Catholics expressed "disappointment and dismay" that a workshop titled "Becoming a Welcoming Parish to LGBTQ Persons" would be included in the conference. The letter further stated that Catholics are:

mad and upset and cannot believe that this is going to be presented as something good for the church. I hope you reconsider and think about what the damage will be. Catechism teachers, Confirmation, RCIA instructors and many others are going to attend and then take it to their parishes, thinking that, that is the teachings of the Catholic Church.

In response, a representative of the diocese stated, "The content of the workshop will be taken under review, and the Director of the Office of Formation and Evangelization, Rosie Hernandez, will be speaking with the presenter about your concerns."

A link to the conference program indicates that the 2018 Fresno Diocesan Congress begins Oct. 12 at 9 a.m. and ends on Oct. 13 at 5 p.m. A page describing the workshop, "Becoming a Welcoming Parish to LGBTQ Persons," explains that the presenter is John Prandini, director of ministries for the St. Paul Catholic Newman Center in Fresno.

Prandini's bio indicates that he "established the first diocesan LGBTQ Catholic Ministry in 2015 at St. Paul Catholic Newman Center." According to the description of the workshop, the session is intended to integrate self-identified lesbian, gay, bisexual, transgender and queer individuals and their self-expressed sexuality into parish life. The program description reads:

This session will explore ways that we can invite, encounter, and accompany our LGBTQ sisters and brothers in Christ on their journey to integrate their Christian spirituality together with their sexuality as beloved children of God and as members of Christ's mystical body — the Church. (emphasis added) 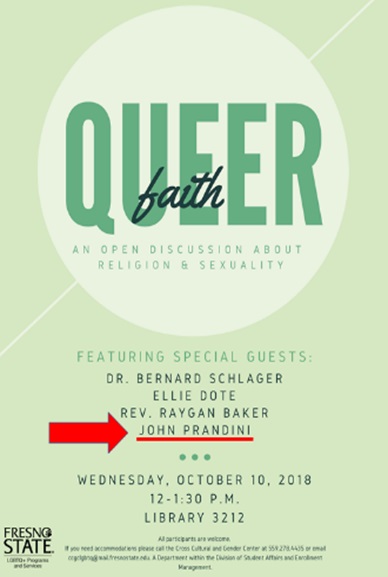 The St. Paul Catholic Newman Center says on its website that it has the full support of Bp. Ochoa "for the formation of a LGBT Catholic Ministry." In light of this, the same page maintains that the ministry is directed at altering the environment within the Church so that sexual deviants will be able to openly express their sexual identity:

Our ministry envisions creating an environment of acceptance where lesbian, gay, bisexual, and transgender persons are able to be open about their identity, and where their human dignity is affirmed and experienced through pastoral support for the integration of their spirituality with their sexuality as beloved children of God and as members of Christ's mystical body — the Church. (emphasis added)

The concerns of Catholics who wrote to Bp. Ochoa to urge him to cancel this workshop appear to have been well founded. In addition to the upcoming workshop, Prandini is preparing to participate in an event sponsored by the Center for LGBTQ and Gender Studies in Religion (CLGS), titled "Queer Faith: An Open Discussion about Religion and Sexuality."

Our mission is to advance the well-being of lesbian, gay, bisexual, queer and transgender people and to transform faith communities and the wider society by taking a leading role in shaping a new public discourse on religion, gender identity and sexuality through education, research, community building and advocacy. (emphasis added)

This promotion of deviant sexual identities seems to be par for the course, however, as LGBT Fresno announced at the beginning of May 2017 that the St. Paul Catholic Newman Center was scheduled to participate in the Fresno Rainbow Pride Parade. After plugging the event as for "all ages" and advertising a "bounce house and kid's area," LGBT Fresno points out that the St. Paul Center will be in attendance along with Planned Parenthood. 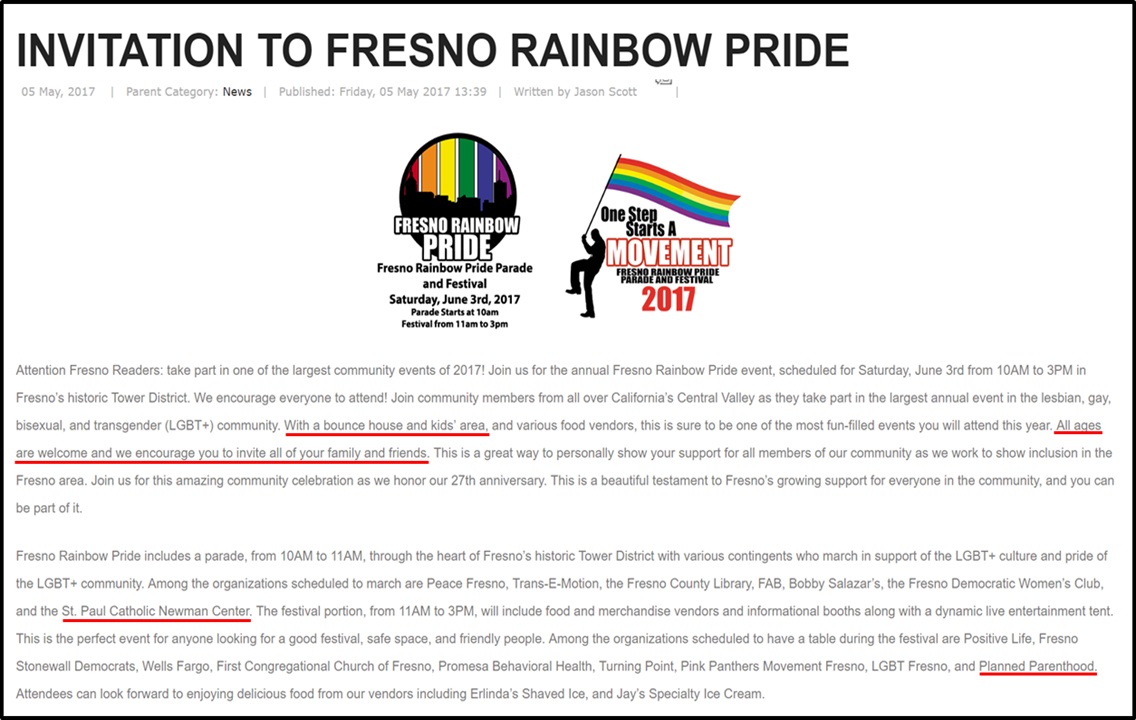 Just a few weeks later, the St. Paul Center announced through its own bulletin that it would be participating in the Fresno Rainbow Pride Parade, inviting family and friends to join them in the march. 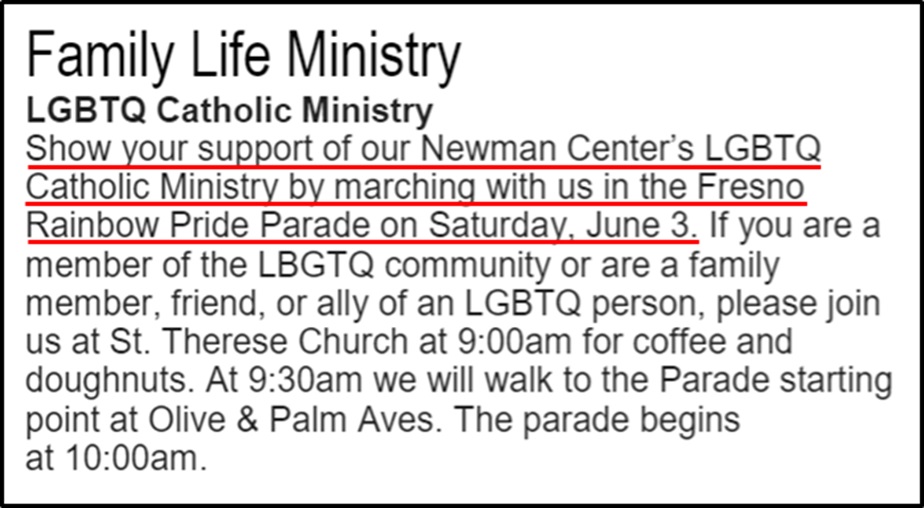 Video of the Fresno Rainbow Pride Parade reveals that the St. Paul Catholic Newman Center did indeed participate in the parade, and the banner was carried by none other than John Prandini, the same man slated to talk to CCD teachers, confirmation instructors and RCIA instructors at the 2018 Fresno Diocesan Congress on welcoming homosexuals into Catholic parishes. The center and its marchers appear at the 35-minute mark and walk off at 36:20. 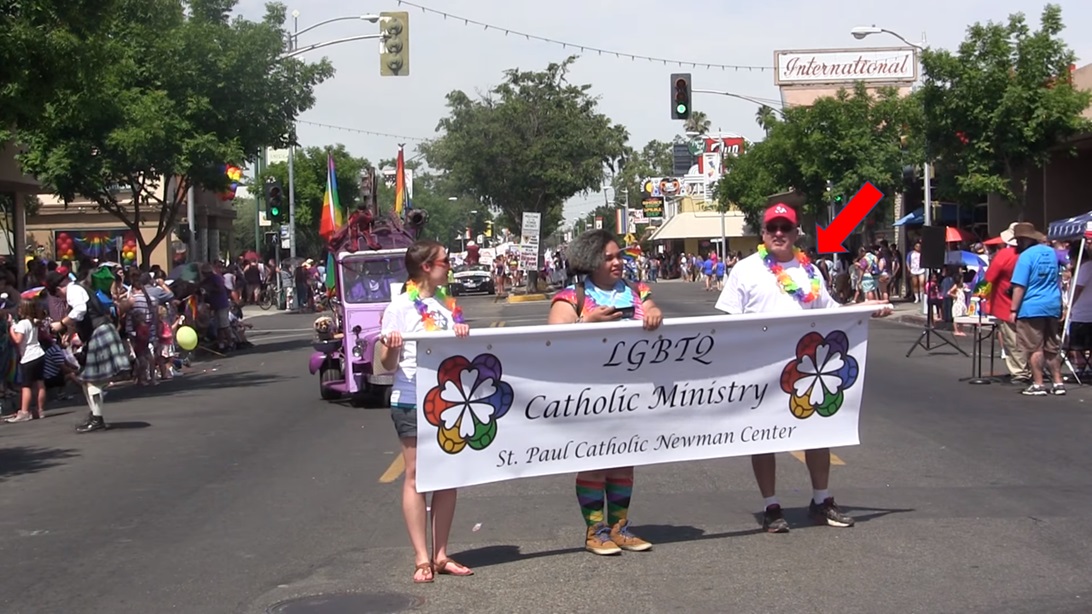 Other images from the parade reveal that the parade was in no way family friendly. 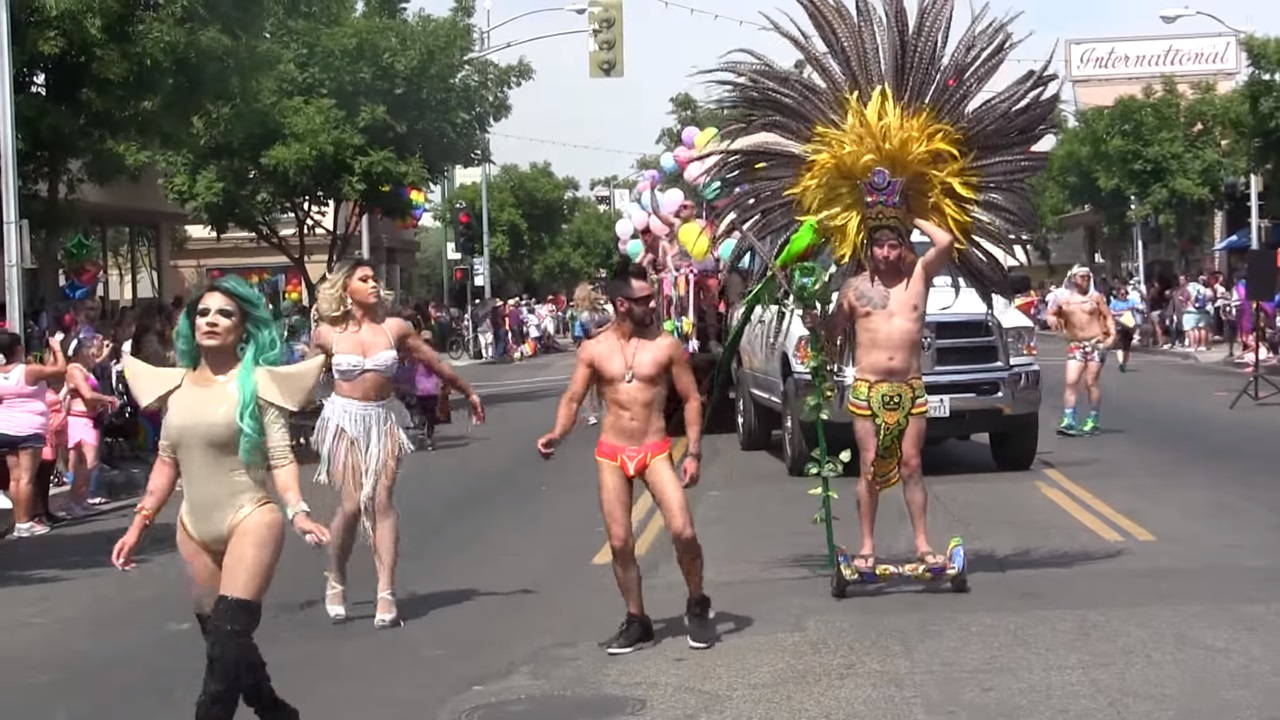 As advertised, Planned Parenthood had a strong showing at the event as well. 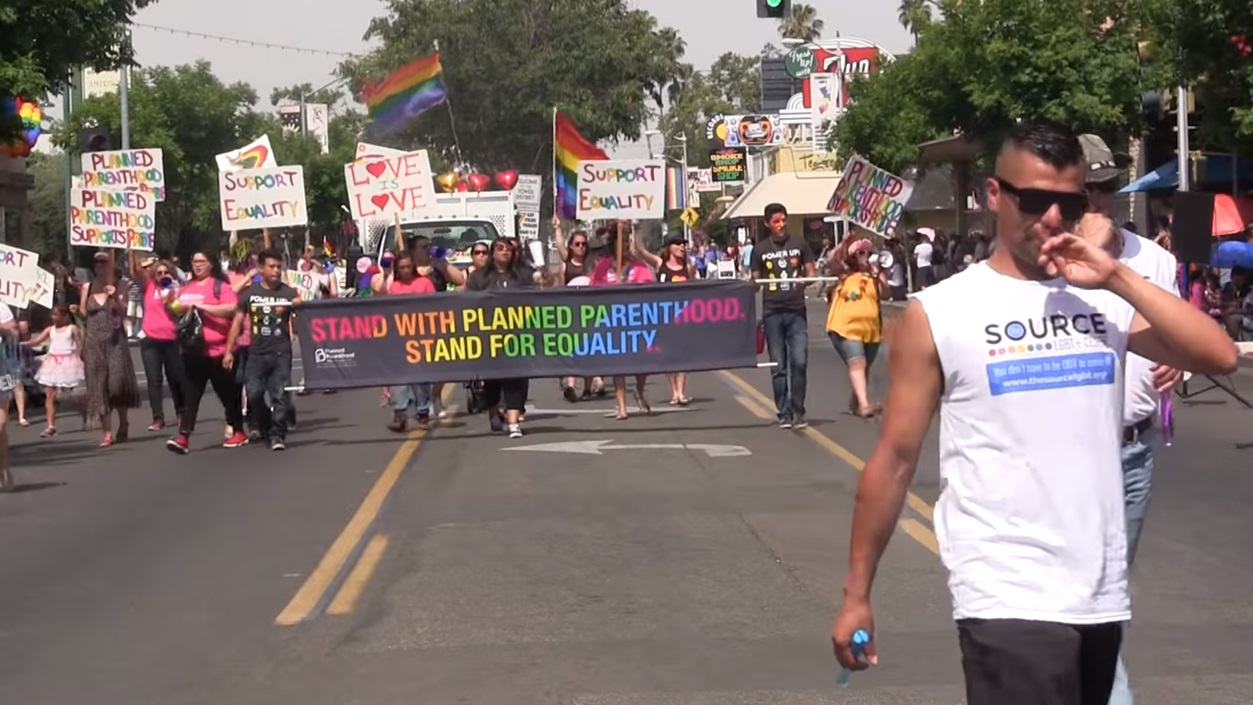 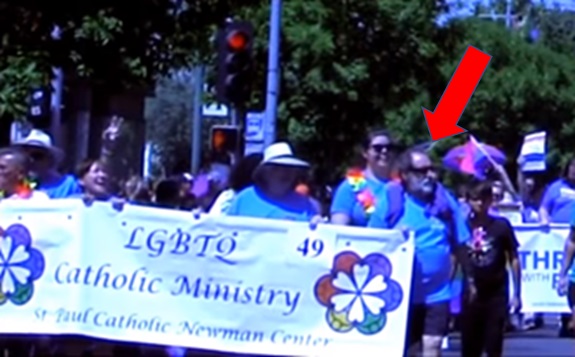 Concerned Catholics can contact Bp. Ochoa, respectfully asking him to withdraw his support from the St. Paul Catholic Newman Center and to remove John Prandini's presentation with the following contact information:

Office of the Bishop Most Reverend Armando X. Ochoa, D.D. 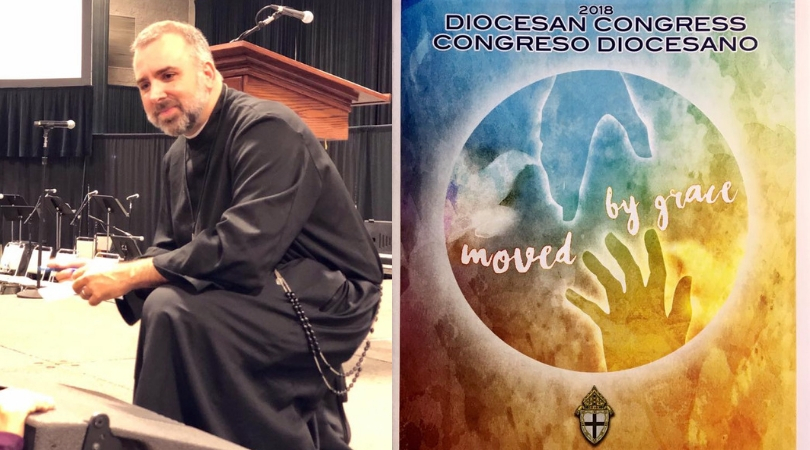 Notes From the Disgraced Fresno Congress
By Church Militant   •   0