From Bad to Worse in Virginia 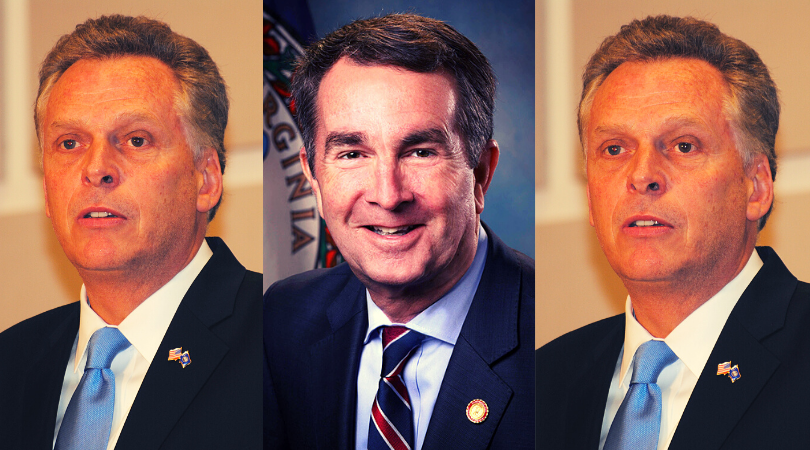 RICHMOND, Va. (ChurchMilitant.com) - A Bill and Hillary Clinton bedfellow is once again setting his sights on the Virginia governorship.

Pro-abortion, pro-LGBT "Catholic" Terry McAuliffe declared his candidacy for the commonwealth's top executive spot on Wednesday, targeting a return to Richmond in 2022.

After a failed gubernatorial bid in 2009, McAuliffe captured the governor's mansion in November 2013. He left office in January 2019, as state law bars governors from serving two terms consecutively.

To many Virginians, the high-profile Democrat epitomizes "swamp" politics. In addition to heading the Democratic National Committee from 2001–2005, McAuliffe served as co-chair of Bill Clinton's 1996 re-election bid and chair of Hillary Clinton's 2008 presidential campaign.

From 2014–2018, he helped cement Virginia's shift from red state to blue, realigning the commonwealth with the liberal states of the Northeast.

'Grave Threat to the Commonwealth'

In his campaign announcement Wednesday, McAuliffe — employing political jargon — committed himself to a program of social re-engineering.

"We have a huge opportunity here in Virginia to address the inequities of the past, to move Virginia forward, to create a better future for all Virginians," he said. "But it's going to take big, bold, proven leadership to get it done. I'm ready."

Four years of McAuliffe was enough.

But conservatives are firing back at the former governor, warning Virginians that he presents a grave threat to the commonwealth. On Wednesday, for example, the Republican Governors Association lambasted McAuliffe as an establishment leftist who will drive the state into the ground:

Time and time again Terry McAuliffe has proven to be the typically slick politician that is so often negatively depicted in movies and sitcoms. Always out for himself, calculated and driven by his own massive ego, it's no surprise that McAuliffe is running for governor of Virginia for the third time.

After four years in office as governor with no accomplishments, McAuliffe remains best known as a Clinton lackey and partisan hack whose past is marred with shady business deals. Now, emboldened by a Democratic Party that has shifted even further leftward, McAuliffe is attempting to return to rule Richmond and his party and dramatically reshape the commonwealth in his image.

Four years of McAuliffe was enough.

In contrast to his lack of accomplishments elsewhere, during his tenure the former governor was remarkably effective in advancing the cause of abortion. McAuliffe presided over the reversal of several state pro-life measures, fulfilling one of his campaign's key promises — that he would erect a "brick wall" against abortion limitations.

In February 2017, McAuliffe's abortion record earned him the rebuke of the Virginia Catholic Conference, the public policy arm of the state's two bishops and their dioceses.

Gov. Terry McAuliffe has demonstrated his unwavering commitment to the nation's largest abortion provider at the expense of comprehensive health care for women. ... The Virginia Catholic Conference upholds the timeless truth that every human being, born and unborn, has an equal right to life. The Conference finds Gov. McAuliffe's pride in protecting an organization that destroys life and harms women and their families deeply offensive. We will continue to fight for the day when Virginia law protects all human life, at every stage of development, from conception until natural death.

Since that time, Virginia Democrats — led by McAuliffe successor and ally Gov. Ralph Northam — have spearheaded a massive pro-abortion push.

During his 2017 gubernatorial bid, Northam was endorsed by Planned Parenthood. Hailing the leftist Democrat as an abortion "champion," the nation's largest abortion provider poured millions of dollars into his campaign. To the dismay of pro-life Virginians, in November 2018 Northam defeated pro-life Republican challenger Ed Gillespie.

In an op-ed leading up to the election, McAuliffe predicted that under a Northam administration, the Democrats' "brick wall" against pro-life measures "will grow taller and wider than ever before." His forecast was right.

In a January 2019 radio interview, Northam shocked many Americans by endorsing infanticide for babies who survive abortion.

Pro-lifers pointed out that under Northam's scenario, if the mother did not desire resuscitation, the child would be allowed to die.

In April, Northam signed a bill widening access to abortion in Virginia.

The measure struck down the state's 24-hour waiting period, overturned ultrasound and counseling requirements and lifted a provision that abortions could only be performed by licensed doctors.

Abortion activists hailed the bill, saying it will solidify Virginia as a "safe haven" for abortion and a magnet for abortion-minded women from nearby conservative states.

Pro-life Virginians foresee this ominous trend continuing under a new McAuliffe term  — or that of any other Democrat.

"These people are gleefully pushing the baby-murder-for-hire industry and rubbing their hands with dark anticipation of the further perversion of children through LGBT indoctrination. The Democrat Party isn't sick; it's evil, plain and simple," Lepanto Institute founder and president Michael Hichborn — a Virginia resident — told Church Militant Thursday.

Hichborn exhorted Christians in the commonwealth to deepen their commitment to rolling back Democrats' rule:

Virginia needs to remind its leaders of our motto: "Sic Semper Tyrannis." We proudly threw off the yoke of the tyrannical rule of King George III, and we must now expel the tyranny of the Democrat Party. But in order for this to happen, faithful Christian citizens must become far more involved in the political process. We need them to be poll workers, poll watchers and volunteers in knocking on doors to get out the vote. And most importantly, we absolutely must demand that all voting be done on paper ballots, in person, with a photo ID.

He added that four more years of leftist hegemony — whether under McAuliffe or a Democratic colleague — would pose an existential threat to the future of the state.

"Given how thoroughly pro-abortion and anti-Christian the Democrat Party has become," Hichborn warned, "the fact of the matter is that Virginia might not survive as a member of the Land of the Free with another four years of Democrat rule."