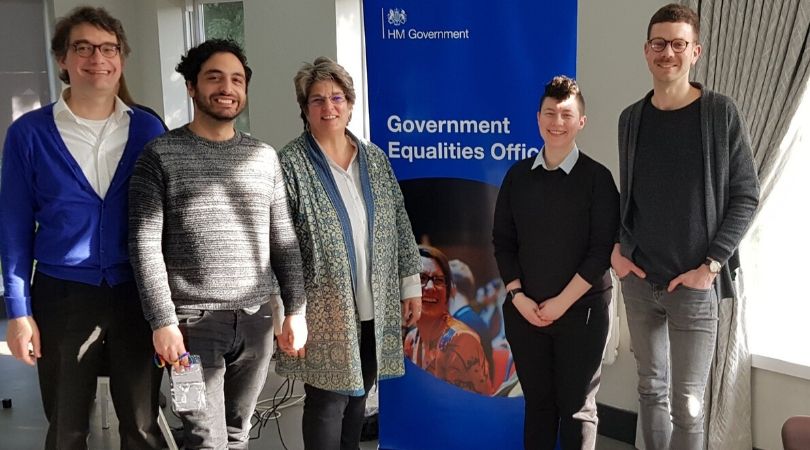 ROME (ChurchMilitant.com) - A Catholic LGBTI+ organization, which has the approval of Westminster archbishop Cdl. Vincent Nichols and enjoys "privileged seating" at Pope Francis' audiences, is fishing for funding from the British taxpayer.

Quest LGBTI, an advocacy group that openly opposes Church teaching on homosexuality, presented itself at a leadership summit organized by the U.K. Government Equalities Office (GEO) hoping to benefit from a slice of the £600,000 of taxpayer money doled out to LGBT+ organizations.

The convention held Feb. 5–6 advised pro-gay charities on their "financial sustainability and operational effectiveness," noting that currently, 41% of LGBTI organizations are dependent on central government funding.

"Today, we live in a society where same-sex marriage is a reality in all corners of the United Kingdom, which is a great thing," Minister for Equalities Baroness Williams of Trafford, told the delegates.

Williams called upon delegates to "work with communities across the U.K. and globally to end this so-called conversion therapy," claiming that "techniques employed by people who promote these practices are quite frightening and have very tragic consequences in many cases." Conversion therapy is the pejorative term used for reparative therapy in Britain.

"I have to say I remain absolutely shocked that this is practiced at all in the modern world. LGBT people are not broken, they're not ill, they don't need to be fixed and they don't need to be cured. And that's why the government is committed to ending these practices for good," the minister asserted.

Workshops and discussions included the sustainability of attendees' organizations, leadership and how to lobby effectively with a collective voice.

"There is something absurd and totalitarian about our government providing funding to help dismantle the Church's teaching on the foundational question of sexual morality," Maria Madise, manager of Voice of the Family, told Church Militant.

"That is the kind of project the Soviets used to be engaged in," she observed, adding: "It's little surprise the government wishes to align the Catholic Church with its anti-life and anti-family agenda, and co-opting dissident pseudo-Catholic organizations to work from within would obviously be the most straightforward way to do it."

It is ironic though that even the government is tired of the LGBT lobbies' reliance on central government funding — and is trying to encourage such organizations to be more financially self-supporting. That does demonstrate how this has been all an establishment-driven agenda, which has never had the popular consent or support of the British people.

But Quest's secretary Thomas Bartsch who attended the event said he was "grateful to stand together in this work with our LGBT partners of different faiths." Quest also works closely with the militant LGBT group Stonewall.

There is something totalitarian about our government providing funding to help dismantle the Church's teaching on the foundational question of sexual morality.

Meanwhile, Quest has announced that its 2021 pilgrimage to Rome will be led by ex-priest Martin Pendergast, who has been in a gay civil partnership with Julian Filochowski, the former head of Cafod, since 2006. Cafod is the official bishops' conference charity for overseas development.

Pendergast, who describes himself as "proudly gay and proudly Catholic" has challenged the "untraditional Catholic term, 'intrinsic disorder' to describe homosexuality" on the grounds that it applies "an intricate philosophical term to a complex human and theological reality."

The pilgrims have been promised "privileged seating" at Pope Francis' weekly general audience on Ash Wednesday and will celebrate Mass at Cdl. Vincent Nichols' titular Church of the Most Holy Redeemer and San Alfonso.

After displaying a photograph of an earlier group of LGBT pilgrims with the Holy Father, the pilgrimage draft program brazenly advertised "Rome's Gay Street" at the bottom of its flyer: "There are no particular gay areas in Rome, but a popular hotspot of the gay and lesbian community in the late evening and at night is the street in front of the two cafe-bars Coming Out and My Bar, Via di San Giovanni in Laterano — No. 9 on Map, close to the Colosseum."

Speaking to Church Militant, Deacon Nick Donnelly, a commentator on the LGBT Catholic movement in England, lamented that the "heart-breaking scandal of our times [is] the Catholic priests, active and laicized, living and advocating the sin of sodomy; hands consecrated to act in persona Christi are instead engaged in acts of grave depravity."

"Instead of seeking God's forgiveness, they boast of their leadership of militant LGBT groups within the Church, celebrate blasphemous Masses with the connivance of cardinals and bishops and make pacts with government agencies committed to attacking the Church's moral teaching, especially among children," Donnelly added, calling for resistance and "prayer for the salvation of their souls."

Other religious groups and delegates participating in the leadership summit were Samie Mansoor of Hidayah, LGBTQI+ Muslims; Jayne Ozanne, member of the General Synod of the Church of England and Director of the Ozanne Foundation; Dalia Fleming of Keshet, LGBTQ Jews; and Luke Dowding, head of OneBodyOneFaith.