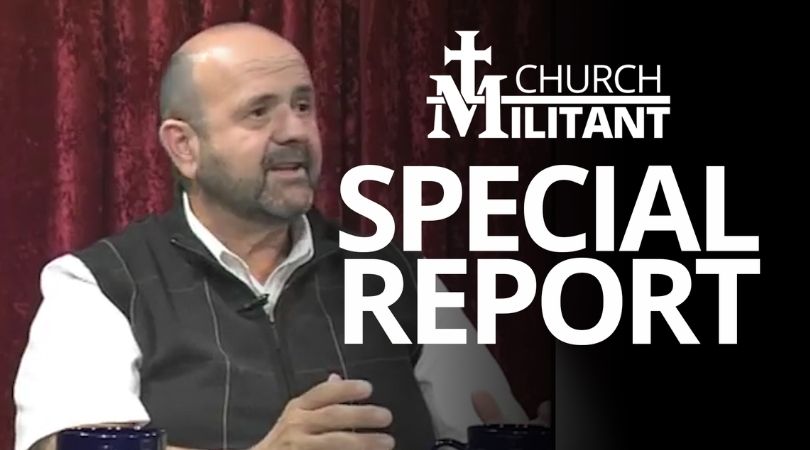 The diocese of Fresno, California has been wracked by scandal over the past several months, with priest after priest placed on leave as allegations of homosexual abuse pour forth from multiple victims.

In our last report we focused on Msgr. Craig Harrison, a popular and powerful priest, now under investigation after at least six men have accused him of abuse, with evidence he may also have been stealing thousands of dollars in donations.

Father Lastiri spent most of his priestly career as an active homosexual — even in a sexually active relationship with a convicted pedophile.

Father Lastiri has been a priest for more than 30 years, former director of worship for the diocese. He's spent most of his priestly career as an active homosexual — even in a sexually active relationship with a convicted pedophile.

1991 court records from the county of Tulare, California reveal Lastiri was sexually involved with Joe Banuelos, convicted and imprisoned for sexually assaulting a six-year-old boy.

Before the assault, Banuelos was living with Lastiri at Holy Family Church in Visalia, Banuelos himself admitting the two were having sex.

Banuelos had already done time for violent crime prior to hooking up with the priest. But that didn't bother Lastiri, who even regularly loaned Banuelos his Volvo during their sexual relationship.

If he'd done so, he may have helped save a six-year-old boy — a boy whose mother trusted Lastiri to allow her little son to be around the violent ex-con and sexual deviant.

Banuelos eventually died of AIDS after serving his sentence.

That was 1991. But it would take more than a decade for Lastiri's homosexuality to come to public light.

In 2004, parishioners at Saint Patrick’s Church in Merced, where Lastiri was pastor, found evidence he was soliciting sex on the gay website bear411.com. "Bear" is gay slang for hairy, heavy-set men, whom Lastiri preferred.

Lastiri went by the alias Basqueoso, posting photos of himself along with multiple messages looking for sex, among them this one, published under the name "Mike," with the search category "Want Sex," saying "looking for bears/admirers to play with."

After a five-month investigation, parishioners met with the bishop, John Steinbock, and presented their evidence, not only of Lastiri's active homosexuality but also proof that he'd stolen more than $60,000 from the parish.

Steinbock sent Lastiri to St. Luke Institute, the notorious priest rehab center in Maryland, where he spent a few months before being assigned to a new parish the next year.

Before all this, the bishop had initially dismissed concerns raised against Lastiri, slamming them as "a grave sin against justice [for the] character defamation" of Father Lastiri, whom he called a good and dedicated priest.

Lastiri had also lied to those who confronted him, threatening them with lawsuits for their "plots against the Church."

It was only once Catholics presented incontrovertible proof of wrongdoing that the bishop was forced to act.

Even so, after a short stint in rehab, he was back at a parish, where he continued his gay hook-ups and embezzling.

Walsh noted that Bp. Steinbock totally rejected an extensive certified audit of the parish in 2004, instead conducting a private investigation limited to Lastiri's last two years at the parish, even though Lastiri had been there for more than a decade. A full audit would've turned up hundreds of thousands of dollars in stolen funds.

This criminal enterprise may have been facilitated by the action of the District Attorney of Merced County.

Walsh said the results of a certified audit could've been used by the DA to prosecute Lastiri. As it is, the Merced County DA never pursued prosecution, because he never even bothered to examine the evidence.

It is not unreasonable to question why the Bishop and some Pastors so feared an independent audit. Could it be that true audits might disclose that the Bishop with some Pastors had entered into a criminal enterprise that involved the gross misappropriation of parish funds?

Fast forward to September 2018. Lastiri was pastor of Immaculate Heart of Mary Parish, Director of the Office of Worship — and still engaging in homosexual activity.

This time, the bishop enabling him was Armando Ochoa, who arrived with a reputation for persecuting faithful priests in El Paso, Texas.

Last August, Ochoa had announced Lastiri would be taking over St. Brigid parish, leading to a flood of calls and letters to his office from parishioners objecting to the move, citing his extremely troubled past.

In a meeting with the bishop in August, Ochoa reversed course and promised he would not assign Lastiri to St. Brigid. But parishioners insisted he remove the priest from ministry altogether, showing him evidence of Lastiri's online activity.

The bishop then met privately with Lastiri. It's unclear what they discussed, but Lastiri started deleting the gay websites afterwards.

Bishop Ochoa did not remove Lastiri — until Church Militant published a report on Sept. 7, 2018 exposing his sexual activity.

But more than eight months later, Lastiri is still listed as official pastor of Immaculate Heart of Mary Church, although his current status remains unclear.

Church Militant contacted the Fresno diocese, under the leadership of newly installed Bp. Joseph Brennan. We asked whether Lastiri would be placed back in active ministry or permanently removed.

Spokeswoman Teresa Dominguez said Lastiri's status has not changed and that "internal processes are still in progress."

Catholics' worst fear is that Lastiri will simply wait it out until the scandal dies down — and then be placed back in active ministry to continue with his gay hook-ups and theft of parish funds.

Locals are looking to Bp. Brennan to break this decades-long pattern of sexual and financial misconduct and bring an end to clergy using and abusing the faithful for their own gain.

It'll be a test of Brennan's commitment to reform.