Father Warren Hall was fired as campus minister at Seton Hall last May after he posted a pro-gay marriage tweet on social media. His firing provoked public outcry from angry students. When questioned about his removal, Seton Hall said personnel decisions were up to the Newark archdiocese, and an archdiocesan spokesman afterwards confirmed, "The Archbishop of Newark appoints the Director of Campus Ministry, who serves at his discretion."

Hall continues to feel he was "unduly punished" after his pro-gay tweet, and has expressed hopes to meet with Pope Francis when he visits the United States in order to encourage the Pope to "listen to the challenges faced by LGBT people" who he claims are "being silenced and accept it out of fear of being disciplined by their superiors."

"As a gay priest, I am personally experiencing all of these things."

But the archdiocese of Newark is denying he was fired for the controversial tweet. Jim Goodness, archdiocesan spokesman, said, "There are a lot of reasons why people move from one assignment to another. It was time for him to move to another assignment."

According to Goodness, Fr. Hall took a six-week vacation, after which his assignment was changed. 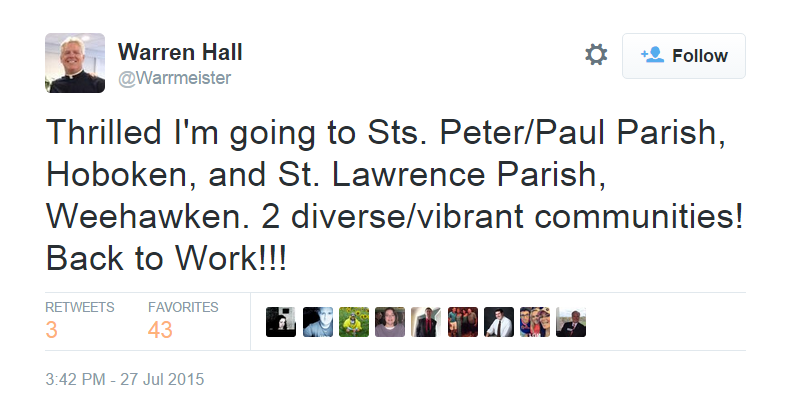 When asked whether his homosexuality would present a problem in his ministry, Goodness responded, "If he remains celibate, and he maintains his ordination promises, his sexual orientation is not an impediment."

A spokesman for Sts. Peter and Paul echoed the archdiocese in stating sexual orientation "isn't a hindrance" to his priestly ministry.

But these statements contradict the Vatican's official directive on this topic. In an Instruction issued by the Congregation for Catholic Education in 2005, "[T]his Dicastery, in accord with the Congregation for Divine Worship and the Discipline of the Sacraments, believes it necessary to state clearly that the Church, while profoundly respecting the persons in question, cannot admit to the seminary or to holy orders those who practice homosexuality, present deep-seated homosexual tendencies or support the so-called 'gay culture.'"

Father Hall self-identifies as a "gay priest," thus publicly admits of his deep-seated homosexual tendencies. He has also issued public statements in support of the "gay culture." According to the Vatican Instruction, these two facts alone would disqualify him from ordination to the priesthood.

It's unclear whether the archdiocese has forbidden him from speaking out publicly in favor of gay "marriage," but his future parishioners don't seem to mind his stance. According to NJ.com, Geoffrey Scheer, the office manager at St. Lawrence, has heard only compliments from the congregation — which he considers "fairly liberal" — who are happy to welcome Fr. Hall to their parish.

"I think it's great that he's open about it. I appreciate what he's doing. I wish more could be open about it." Scheer went on, "[Father Hall has] a great sort of folksy style. ... It's not 'fire and brimstone.'"