A new activist group of lay Catholics in the diocese of Gaylord, Michigan is calling on Bishop Steven Raica to immediately reinstate a young priest he recently suspended as punishment for filing a complaint of sexual harassment against a top diocesan official, Vicar General Fr. Dennis Stilwell.

Cowan filed a formal complaint of sexual harassment with the Gaylord diocese last August, claiming that while he was assigned to St. Francis Church in Petoskey under Fr. Stilwell as a two-year tutelage program beginning in 2015, Fr. Stilwell began a pattern of unwanted uncomfortable sexually tinged touching the day he first arrived.

On that first day at the parish, Fr. Stilwell insisted on giving the young priest a tour of his personal residence about 20 minutes from the church in the Boyne City/Charlevoix area, Fr. Cowan explained in his complaint to the diocese. "The tour included going into Fr. Stilwell's bedroom, w/ a replica of Michelangelo's Adam above his bed," Fr. Cowan wrote in his email.

Over the next two weeks in July 2015, Fr. Cowan documented four of many instances of unwanted physical contact initiated by Fr. Stilwell in the presence of at least one other person. These included hugs, patting and rubbing his stomach and a slaps on the butt.

Despite Cowan finally telling Fr. Stilwell to stop the touching by telling him on Aug. 5, 2015, "There will be problems if this happens again," Stilwell persisted with the harassment throughout the rest of the priest's time at the parish: "Various low back pats after this throughout the rest of the time there. I always kept my hand on my legs when driving in a car with him to avoid unwanted thigh pats."

After the McCarrick revelations last summer, Fr. Cowan realized he was victimized the same way as McCarrick's victims and decided this pattern was far more serious than he realized.

"I realized that what happened to me by Fr. Stilwell was no longer an isolated incident or outlier in the Catholic Church," Fr. Cowan wrote in an email to chancery officials. "Cardinal McCarrick's response to harassment allegations being 'I don’t recall that.' That's exactly what Denny [Fr. Stilwell] told me when I confronted him."

The conversation went as one would expect in the circumstances. I related to him the events as I recorded them and remembered them, and he asked questions. I gave him the 1st page of the scanned document titled Stillwell1Pdf.

Toward the beginning of the meeting Jim told me his opinion that it is okay for gay man to be a priest and that perhaps the Church should change its teaching about this. Jim said he decided to share this in order to know "where he stood on this" I assume in order to establish rapport. Considering the circumstances of the report I was about to make of sexual harassment against me by a male priest who was my direct superior, I found this to be very out of place and wonder why the Diocese would utilize a person in this capacity who disagrees with the Church's teaching on this issue.

In November, three months after filing the complaint, it became apparent to Fr. Cowan the chancery was not pursuing the investigation with much vigor and concluded the diocese was violating its own standards, perhaps running the clock out until the aged Fr. Stilwell, who was ordained in 1971 and would retire sooner rather than later in 2019, as planned.

Diocesan policy stipulates that after a complaint is filed, the accused priest is to be suspended from ministry immediately until the investigation is completed. Father Stilwell was never suspended.

Finally, on Dec. 19, the exasperated Fr. Cowan sent an eight-page email to several chancery officials and others that included details of his complaint and subsequent correspondence from chancery officials. He complained that he was often told the investigation would be completed "soon" but they were waiting for the investigator to conduct "one more interview" before taking the issue to the Review Board.

"I've come to the unfortunate conclusion that the Diocese of Gaylord is not taking seriously a sexual misconduct allegation I brought confidentially against Fr. Dennis Stilwell," Cowan wrote in the email.

Rather than support Fr. Cowan and demand his Review Board follow proper protocol, Bishop Raica suspended Fr. Cowan in early January from his role as pastor at St. Stephen Church in Lake City.

Rather than support Fr. Cowan and demand his Review Board follow proper protocol, Bishop Raica suspended Fr. Cowan in early January from his role as pastor.

During a meeting packed with 400 people at the parish on Jan. 15 when Bishop Raica answered questions from the audience, he acknowledged he had not spoken to the young priest about the complaint and that back in December, there were plans to someday inform him that the Review Board had concluded that complaint "did not rise to the level of sexual misconduct or was credible or substantiated. Nor did it rise to the level of grooming."'

But Raica said he was offended that Fr. Cowan sent his whistleblowing email, claiming it contained "confidential information" that others were not entitled to see. Instead of respecting Fr. Cowan as a victim in distress, the bishop claimed that the whistleblowing on the young priest's part went "against unity of the presbyterate of the diocese," and that "there may be consequences."

Needless to say, according to Dr. Brenz, hundreds of Catholics who know Fr. Cowan and Fr. Stilwell could not disagree more with Bishop Raica:

The consequences of Bishop Raica neither respecting his own boilerplate apology for the corruption in the Church he issued in his Aug. 15 letter after the Pennsylvania grand jury report is the potential permanent loss of not only an outstanding young priest, but also the shredding of any credibility he has regarding predatory behavior by powerful older priests against younger priests on his watch.

Brenz and other leaders of Gaylord Diocesan Watch indicated there is more related new coming as they complete their own investigations. Brenz said:

The Fr. Cowan situation is only one of several cases our group is researching at this time. In the future, we anticipate presenting information about other egregious violations of sex-abuse rules and regulations by Bishop Raica. For at least two years he has adamantly refused to acknowledge most letters to him and also refuses to rectify obvious scandals.

A request Tuesday morning on the diocese of Gaylord's website by Church Militant to discuss the Fr. Cowan situation with the bishop or one of his subordinates was not answered by press time.

Father Cowan is represented by a canon lawyer and has indicated that neither he nor his lawyers will comment publicly about this situation. 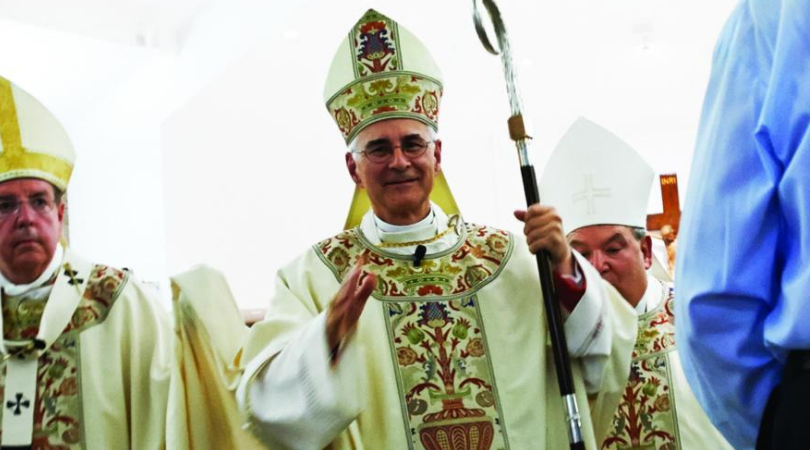