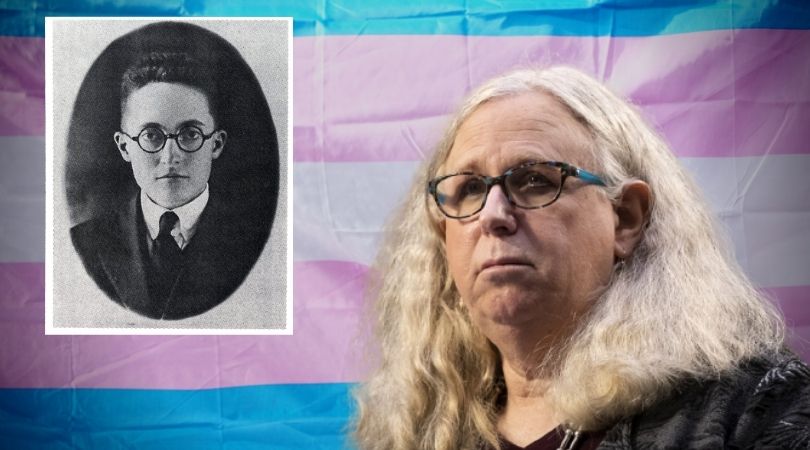 The term "LGBT" stands for "lesbian, gay, bisexual, transgender." The neologism "transgender" was created by Dr. John F. Oliven, who, in his 1965 book, Sexual Hygiene and Pathology, called the term "transsexualism" misleading.  He stated that "where the compulsive urge reaches beyond female vestments, and becomes an urge for gender ('sex') change, transvestism becomes 'transsexualism.' The term is misleading; actually, 'transgenderism' is what is meant, because sexuality is not a major factor in primary transvestism."

Today, the term is erroneously construed as referencing those who "have a gender identity or gender expression that differs from the sex that they were assigned at birth."

Denying reality, many have not only convinced themselves that it's possible to go from a boy to a girl, and vice versa, but also, close to half (46%) of U.S. adults believe it's morally acceptable.

Homosexuality and transgenderism have always been understood, even by the corrupt medical and mental health industries ... as a true mental illness.

Alberta Lucille Hart, or Alan Hart, was the first so-called female-to-male transsexual in the United States. Hart, a woman, fell in love in college with one Eva Cushman. Unable to fight her disordered tendencies, Hart got a hysterectomy in 1917, undergoing surgery to remove her uterus. The surgery was done by Dr. Joshua Allen Gilbert at the University of Oregon, and although Gilbert went through with the surgery, he admitted that Hart was "afflicted with a mysterious disorder for which I have no explanation."

Over time, this "mysterious disorder" spoken of by Dr. Gilbert has not been honestly cared for and cured in society, but rather has been allowed to run wild — adding greatly to the destruction of individuals and our culture as a whole.

A century after the Hart case, in the run-up to the 2020 presidential election, Joe Biden proved to be a prime example of this further destruction. The then–presidential candidate told a mother with an 8-year-old "trans" daughter that "the idea that an 8-year-old child or a 10-year-old child decides, 'You know, I decided I want to be transgender. That's what I think I'd like to be. It would make my life a lot easier.' There should be zero discrimination."

The day before Biden illegitimately took office, he selected a man pretending to be a woman, Richard (now "Rachel") Levine, as his assistant health secretary.

Homosexuality and transgenderism have always been understood, even by the corrupt medical and mental health industries in earlier times, as true mental illnesses.

In 1973, the American Psychiatric Association (APA) made a change in its categorization of homosexuality, moving it from the more accurate "psychiatric disorder" category to "sexual orientation disturbance." The APA's reasoning for the change had nothing to do with psychiatry or science. Rather, it was done because "we feel we have to keep step with times." Those words came from Dr. Robert L. Spitzer — the associate professor of clinical psychiatry at Columbia University who spearheaded the 1973 change.

The disorder of homosexuality has been completely normalized by the mental health industry, and the full acceptance of transgenderism is next.

While the Left cries that "being trans is not a mental disorder," common sense backed by scientific data is not on their side.

In October 2019, the American Journal of Psychiatry published a study titled "Reduction in Mental Health Treatment Utilization Among Transgender Individuals After Gender-Affirming Surgeries." The study found, as the title suggests, that "gender-affirming surgery was associated with reduced mental health treatment."

The editors of the journal and authors of the study ended up issuing a correction that showed that "transgender surgery provides no mental health benefit." Not only did the correction acknowledge what everybody already knew (that "transitioning" procedures don't help mental health), it showed that they do the exact opposite. The correction revealed that people who "received gender-affirming surgery were more likely to be treated for anxiety disorders compared with ... [those] who had not received gender-affirming surgery."

The whole issue of transgenderism can be summed up in the words of Malachi Martin in his book Hostage to the Devil: "Confusion is always of the Devil."