German Bishop: ‘New Theology’ Can Save the Church From Clericalism

Bp. Heiner Wilmer of Hildesheim: 'We can no longer simply say that the question of women's ordination has been decided'

HILDESHEIM, Germany (ChurchMilitant.com) - A German bishop says that a greater openness to change will help fix the crisis in the Church.

Bishop Heiner Wilmer heads the diocese of Hildesheim in northern Germany. In an interview with German-language newspaper Süddeutsche Zeitung published June 13, he said that developing "new theology" is crucial to responding to the abuse crisis and making Catholicism relevant.

In the interview, Bp. Wilmer characterized the Catholic clerical sex abuse crisis as a problem with abuse of power — echoing the claims of some Church leaders that the abuse crisis is the result of clericalism.

For instance, Colombian Cdl. Ruben Salazar Gomez blamed the abuse cover-up scandals on clericalism during the Vatican's February meeting on the abuse of minors; and Pope Francis stated in August 2018 in a letter to the world's Catholics, "To say 'no' to abuse is to say an emphatic 'no' to all forms of clericalism."

Bishop Wilmer complained that the Church had become too focused on sexual morality and appeared to tie this in with the decline of Catholic identity in Western countries.

"We allowed the Church to deteriorate into a moral institution focused on what may or may not take place beneath the sheets," he said, adding that the Sixth Commandment (prohibiting adultery) is not the only commandment.

The bishop said that Christ's message during His public ministry was "not primarily a moral (message)."

Bishop Wilmer further downplayed the importance of chastity and morality, telling his interviewer:

In Saint Matthew's Gospel he does not say, "If you pull yourselves together, you will be the light of the world" or "if you conform to sexual rules, you will be the salt of the earth." He uses the indicative and not the conditional or imperative and says, "You are the salt and the light as you are."

He opined that a more positive and uplifting focus would help draw people back to the Church.

At one point in the interview, Bp. Wilmer spoke about controversial comments he made back in December 2018, such as the claim that "abuse of power is in the DNA of the Church."

The 58-year-old bishop spoke positively of recent pushes for synodality in the Church. He also called on bishops "to walk shoulder to shoulder" with laity and to be open to arguments against things like priestly celibacy and the all-male priesthood.

"We can no longer simply say that the question of women's ordination has been decided once and for all, full stop," Bp. Wilmer opined.

He claimed to be "passionately" committed to priestly celibacy but argued that making celibacy optional would cause the beauty of celibacy "to shine more radiantly."

Bishop Wilmer's comments come as some Church leaders are planning to use the upcoming Pan-Amazonian Synod to push for massive changes to Catholicism.

For instance, included in the synod's working document published June 17 is the following proposal:

This phrasing came amid much discussion about the possibility of allowing married men to become priests in order to provide the sacraments to remote communities in the Amazon.

There are fears that allowing married priests in the Amazon would be a dangerous first step in an attack against the longstanding tradition of priestly celibacy.

Earlier this week, reports surfaced of a closed-door meeting among leading progressives in the Church to discuss the agenda for the synod. The meeting took place in Rome on Tuesday (and concluded on Wednesday), and many of those involved were German-speakers.

Some of the Church leaders at the recent secretive meeting were supporters of married priests, female ordination and other heterodox ideas.

For years, Cdl. Kasper has been an outspoken supporter of allowing Holy Communion to the divorced and civilly remarried without requiring them to live in conformity with Church teaching on marriage.

Cardinal Schönborn of Austria has expressed openness to female deacons.

A more complete list of those invited to the meeting was shared by LifeSiteNews.

Asked about the closed-door meeting of liberal prelates, Vatican spokesman Alessandro Gisotti told the National Catholic Register, "It's a study meeting, not for the public."

"There will be others before the synod," Gisotti added. 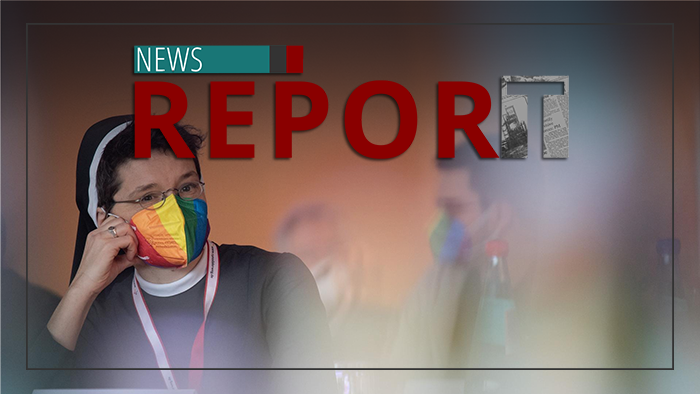