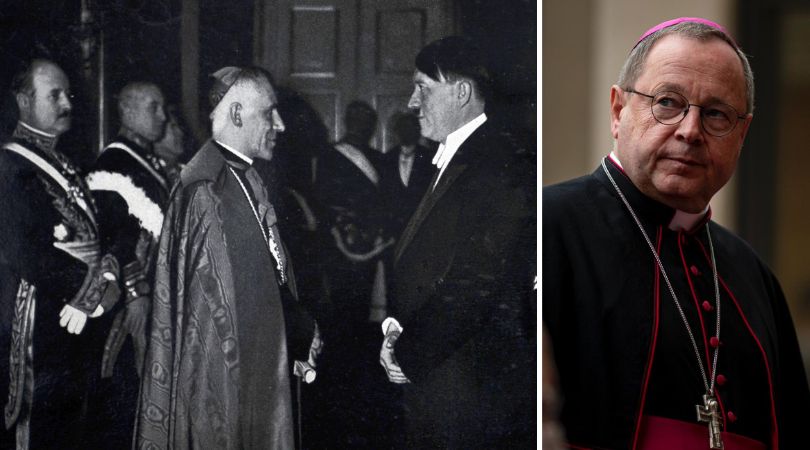 LIMBURG, Germany (ChurchMilitant.com) - Heresy-spouting bishops in Germany have gone ballistic after a Swiss cardinal compared the German so-called Synodal Path to the Church's capitulation to Nazism.

On Thursday, Bp. Georg Bätzing, chairman of the German Bishops' Conference, threatened to "make an official complaint to the Holy Father" if Cdl. Kurt Koch did not issue a "prompt public apology" for this "completely unacceptable way of wording."

German bishops are apoplectic with rage after Cdl. Koch said the Synodal Path's heresy of allowing the zeitgeist (spirit of the age) to supersede God's revelation was precisely the strategy adopted by Christians who acquiesced to the ideology of National Socialism.

"For this phenomenon already existed during the National Socialist dictatorship, when so-called German Christians saw God's new revelation in blood and soil and in the rise of Hitler," Cdl. Koch said Thursday.

The Catholic weekly Die Tagespost asked Koch if the German prelates pushing the Synodal Way were correct to insist on the "signs of the times" and the "feeling of the believers" as "new sources of revelation," and if "Church teaching can be changed in this way" or regarded as a doctrinal development.

Since December 2019, the German bishops have been seeking to change magisterial teaching on the morality of homosexual acts and the admission of women to Holy Orders through a controversial democratic process labeled the "Synodal Way" or "Synodal Path."

German Christians saw God's new revelation in blood and soil and in the rise of Hitler.

Koch, who is prefect of the Dicastery for Promoting Christian Unity, said he was irritated that "new sources are accepted in addition to the sources of revelation from Scripture and Tradition; and it frightens me that this is happening — again — in Germany."

Koch explained how it was the Confessing Church (led by German pastors like Dietrich Bonhoeffer and Martin Niemöller, and theologians like Karl Barth), that issued the Barmen Declaration (1934) in the face of ecclesiastical kowtowing to Nazism.

The cardinal quoted the declaration's first thesis: "We reject the false doctrine that the Church could and should recognize as a source of its proclamation, beyond and besides this one Word of God, yet other events, powers, historic figures and truths as God's revelation."

The Holy Spirit was not promised to the successors of Peter that they might bring a new doctrine to light by his revelation.

"Where revelation is no longer the measure of proclamation and theology, but where, conversely, one's own thinking wants to decide what belongs to God's revelation, there the irresistible urge arises to develop an original theology and proclamation," Koch stressed.

"The Holy Spirit was not promised to the successors of Peter that they might bring a new doctrine to light by his revelation, but that, with his help, they might sacredly preserve and faithfully interpret the revelation handed down by the Apostles or the legacy of faith," the cardinal added, quoting the First Vatican Council.

"The Christian faith must always be interpreted in a manner that is both true to its origins and contemporary. The Church is therefore certainly obliged to take careful note of the signs of the times and take them seriously. But they are not new sources of revelation," he added.

The cardinal lamented there is a "strong tendency" in current German theology "to assume that freedom is the highest value for human beings and to judge from this what can still count as the truth of faith and what has to be thrown overboard."

Koch responded to Bätzing on Friday, saying he would not withdraw his statement because he had not compared "the Synodal Way to Nazi ideology" but draws a parallel between the Church's capitulation to Nazism and the Synodal Path's claim "there are supposedly new sources of revelation" based on which Church teaching can be changed.

In this context, it was important to me to recall the Barmen Theological Declaration because I still consider it important today, also for ecumenical reasons.

It was in no way my intention to hurt anyone. I simply assumed that we can still learn from history today, even a very difficult one. As the violent reaction of Bp. Bätzing and others show, I have to say afterwards that this attempt failed.

"I apologize to those who feel offended by me," the cardinal added, "but, I cannot withdraw my critical question" that "I have raised out of a theological shared concern for the future of the Church in Germany."

The Synodal Way ... rescinds the Constitution of the Church of Divine Right, which is based on the Word of God.

In an editorial for the German Catholic Church's news portal Katholisch.de, editor Matthias Altmann insisted Koch's "subsequent statement" does not change the fact that the cardinal does indeed "draw parallels between the Synodal Path and debates in the Nazi era."

While German Christians did attempt to theologically justify the Nazi dictatorship, the current Synodal Way is "an honest theological struggle" for a German church in a democratic society, which seeks to include homosexuals and victims of abuse, Altmann explained.

"I cannot accept the answer to my publicly expressed criticism as satisfactory, since Cdl. Koch does not essentially apologize for the untenable statements, but — on the contrary — makes them even worse," said Bätzing on Friday afternoon in Bonn.

In 2020, Cdl. Gerhard Müller, prefect emeritus of the Congregation for the Doctrine of the Faith, sparked outrage after dismissing the Synodal Way as a "suicidal process" similar to "the situation when the Weimar Constitution was repealed by the Enabling Act."

The Enabling Act of 1933 allowed the government of the Third Reich to issue laws without the consent of Germany's Parliament, laying the foundation for the complete Nazification of German society. The Act formally set aside the constitution and authorized a dictatorship.

Müller noted the Synodal Way, "a self-appointed assembly, which is not authorized by God nor by the people it is supposed to represent, rescinds the Constitution of the Church of Divine Right, which is based on the Word of God (in Scripture and Tradition)."

While German bishops initially banned Catholics from joining the Nazi Party on account of its "false teachings," they eventually withdrew their opposition to Hitler and found ways to work with the Nazi regime, writes historian Fr. Robert Krieg in his book Catholic Theologians in Nazi Germany.

Doris L. Bergen, in her book Twisted Cross: The German Christian Movement in the Third Reich, explains how Nazi Christians redefined the doctrine of baptism "as a pivotal point for imposing their racial policy on the Christian community." A pastor in the Third Reich said the "two pillars" on which German identity rested were "blood and baptism."

Baptism — in this paradigm — also reminded parents their children belonged to the German Volk [the State], not to God or to the parents. Moreover, public statements by German church leaders stressed that baptism could not bring a non-Aryan into the German church.

Bergen draws attention to the 'feel-good' and 'therapeutic' dimensions of these liturgies.

Holy Communion was also subverted along the lines of racial identity politics, with the bread symbolizing "the body of the earth that, firm and strong, remains true to the German soil," and the wine "the blood of the earth," representing "loyalty unto blood" and total dedication to the Volk.

Bergen draws attention to the "feel-good" and "therapeutic" dimensions of these liturgies, whereby theological content and traditional doctrines were replaced by emotional expression. A key aim of these liturgies was the creation of the new identity of Gemeinschaft (community) among the Volk.

Meanwhile, Austrian bishops signed a document during the Anschluss — Hitler's annexation of Austria — declaring themselves supporters of National Socialism and asked Catholics to vote in favor of joining the German Reich.

A protocol of the Austrian Bishops' Conference dated March 20–21, 1939 stated: "Fiftieth birthday of Der Führer — agreement on sounding of the bells every quarter of an hour on the preceding Sunday and a sermon with prayer for fatherland and Führer."