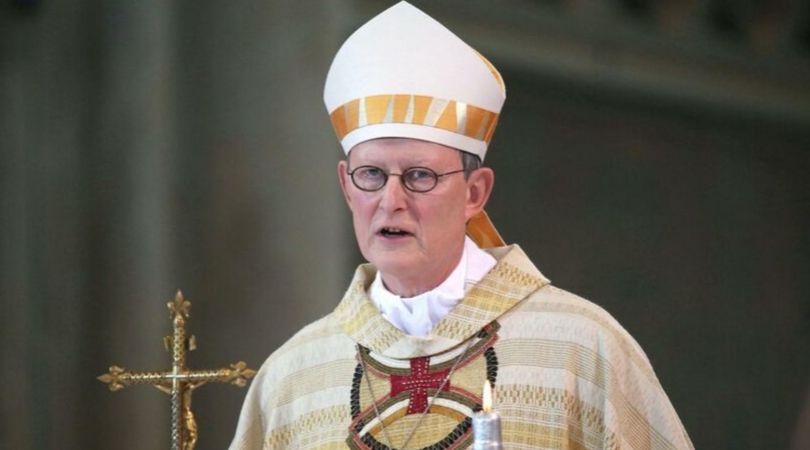 Cdl. Rainer Woelki fights for orthodoxy, leaves much to be desired

With almost daily news stories about the horrors which theologically dissident German prelates are determined to foist upon the Church and with the very real possibility that a formal schism might result from the so-called "synodal path" determined upon by Cdl. Reinhard Marx and his allies, it is easy to overlook the fact that the German clergy are themselves anything but unified.

The numbers indicate that a relatively small but not inconsiderable minority of bishops from Germany are resisting the radicalism of their confreres. Twelve out of sixty-five members of the German bishops' conference voted against the "synodal path" statutes.

Seven wrote a letter to Rome protesting the conference's 2018 decision to allow Protestant spouses of Catholics to receive Communion. Not the most encouraging numbers, but when all factors are taken into account, it's part of a picture which is more positive than may be expected.

In the current climate in the Church, opposition to modernist proposals is undoubtedly sincere.

One sign of hope is the fact that some of the most orthodox German voices are found among both the high ranking and the youngest of German bishops. Five out of eight living German cardinals are actively opposed to the radical modernists. Two of the three German cardinals eligible to vote in a conclave (Gerhard Müller and Rainer Woelki) are defending orthodoxy. The faithfulness of the senior German curial official, Abp. Georg Ganswein, is well-known.

We must also keep in mind that, in the current climate in the Church, opposition to modernist proposals is undoubtedly sincere. During the pontificates of John Paul II and Benedict XVI, it was common enough for careerist clerics to engage in merely pro forma defenses of orthodoxy.

Even more revolutionary clergymen did so with some regularity while promoting and indulging dissent behind the scenes. For bishops to actively resist the agenda of Pope Francis' inner circle can only be demonstrative of real devotion to the Faith.

Of further significance is the fact that the faithful German bishops tend not to be particularly conservative or traditionalist on matters of prudential judgment.

Cardinal Woelki has been the most vocal diocesan bishop in Germany to oppose the modernists — warning of the danger of schism, insisting that definitive Church teaching restricts the priesthood to men, opposing admission of Protestants to Communion, stressing that the laity's insistence on changes to Church teaching result from clerical failure to provide proper instruction, affirming that men cannot change the divine constitution of the Church, castigating those who would use the sex abuse crisis to argue for married clergy and priestesses and generally insisted upon the immutability of revealed truth.

On the other hand, however, Cdl. Woelki's cathedral recently became the first in Germany to appoint women to the position of supervisory steward.

When appointed as archbishop of Berlin (before his subsequent transfer to Cologne) his defense of Catholic teaching on the disordered nature of homosexual attraction led to strong denunciations by the Left.

Yet he has also said that the relationships of homosexual couples can have positive aspects alongside the immoral and disordered ones. Cardinal Raymond Burke aptly revealed the fatuity (rather than the strict error) of such statements when he pointed out that one could just as easily find authentically positive ways that members of criminal organizations relate to each other existing alongside their common devotion to profiting through theft, drug dealing and murder.

One can see a similar ambivalence in the case of Bp. Stefan Oster of Passau. Though he has been vague about specifics, it seems that he believes that Pope Francis is trying to take the Church in the direction of what might be called the "left-wing of orthodoxy" (in terms of priorities, prudential judgments, etc.) while other senior Churchmen (to some of whom the Pope is notably favorable) are those who wish to cross the line.

It is disheartening to realize that the defenders of orthodoxy in the influential German Church are themselves lacking in prudence and realism.

On this basis, he is supportive of what he believes to be Francis' general orientation and has argued that Francis is not responsible for moral rot. He also seems favorable to some broadening of the exceptions to the general rule of clerical celibacy. On the positive side, he has argued that it is not possible to administer Communion to those living in adulterous civil marriages without undermining Catholic moral teaching.

In a way, it is disheartening to realize that the defenders of orthodoxy in the influential German Church are themselves lacking in prudence and realism, can have regrettable priorities and betray a willingness to compromise with the spirit of our horrid age, even perhaps a degree of sympathy for its flawed concerns.

But there is also, perhaps less obviously, a way in which it is a ground for hope. It shows that there are senior Churchmen who, despite such flaws, are ultimately devoted to remaining within the minimum — even if the very bare minimum — of the boundaries of orthodoxy and are willing to stand up against its enemies.

Sooner or later, Pope Francis will be forced either to alienate either these very men or the radical modernists. The former path will leave him with little support left; the latter will ameliorate the overall situation in the Church.