German Institute Gets Backlash for Blasphemy

Catholics paint over beheaded Christ image, write 'He is risen'

PORTO ALEGRE, Brazil (ChurchMilitant.com) - A German institution is pushing satanism in Brazil despite protests and condemnation from faithful Catholics.

Since March 22, the Goethe Institute of Porto Alegre has displayed the work of two Left-leaning graffiti artists, Amaro Abreu and Rafael Augustaitiz, in an exhibition titled "Pixo / Grafite: Parallel Realities."

But one of Abreu's paintings on the outside wall of the institute is a well-known painting of Jesus Christ the Pantocrator ("the sustainer of the universe") deformed with devilish eyes and beheaded on a tray with blood dripping.

"What Goethe Institute regards as its mission [in] underdeveloped countries such as Brazil is to sponsor every sort of leftist extremism conceivable," Henrique Garcia, a native of southern Brazil, told Church Militant. It functions "as a disguised arm of the globalist agenda, promoting anarchy, socialism and — as it was now revealed — satanism with the generous money of the German tax-payer."

The painting prompted backlash from a number of concerned Catholics, including Felipe Diehl who reacted to the sacrilege and blasphemy, calling the exhibition "satanism." A petition was also launched against the institute calling them to yank the painting since it incites "hatred of Christianity." It has garnered more 3,370 signatures, as of press time.

The archdiocese of Porto Alegre also condemned the exposition publicly in a statement on April 30, saying:

The controversy and reactions that are occurring before the unfortunate image are the result of a lack of respect for religious sense, Christian values and the history of this city. ... Where there is no respect, there is no truth; where you assault what is sacred to the other, there is no kindness and thus beauty is perverted.

However, the institute via its Director Marina Ludemann responded to the backlash the same day, claiming it was receiving "hate messages," while denying allegations that it was "the intention of the institute's project to offend religious sentiments. We respect all beliefs, manifestations and freedom of expression."

Centro Cultural São Bento, an association of lay Catholics, declared on May 1 that demeaning religious symbols are a crime under article 208 of the country's penal code.

This came as an anonymous Catholic activist cleared the decapitated head of Christ, writing over it "He is risen." The Institute via Ludemann responded with a statement on May 2, saying, it "is analy[z]ing the demonstration received as a result of the painting of the wall of its headquarters ... which will be presented until May 19th."

"In the next few days, the institute discusses internally what actions to be taken before the project's impact," continued the statement.

But Bruno Mendes, director of the Don Bosco Center, a group of Catholics in Rio de Janeiro, defended the work of the anonymous Catholic activist.

"As practicing Catholics, we can not deny the enormous satisfaction we had in knowing the graffiti. But objectively, we do not know who was the author of this specific action to defend the Catholic faith against unconstitutional abuses like this. ... we rejoice to see the graffiti," he said.

Augustaitiz is known for his past expositions and graffiti on buildings displaying "evil" in a "ghost town, inverted, reflected in the mirror of the devil" along with an inverted pentagram and the sequence "666" (in reference to the Antichrist).

His Instagram profile description alludes to Satan: "Here lies Raphael, who feared Nature for being defeated in his life, and, once dead, to die with him."

Garcia summed up to Church Militant the war in Brazil is between the conservatives and the globalist elite, which control the institutions, pushing "pedophilia, gender ideology, class and race struggles." 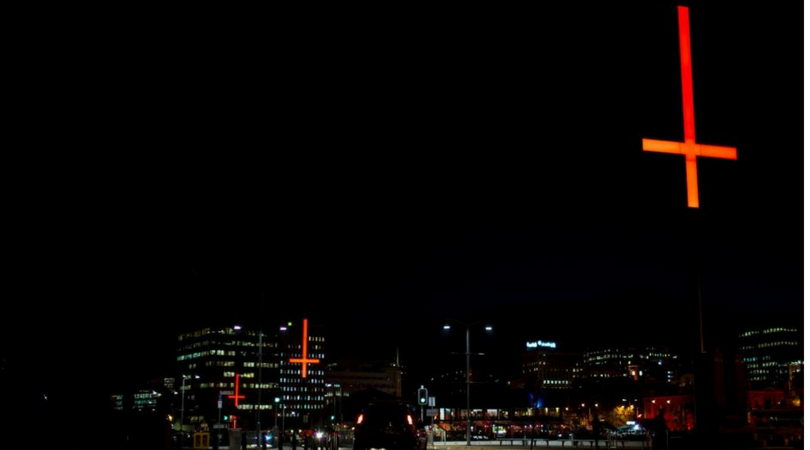