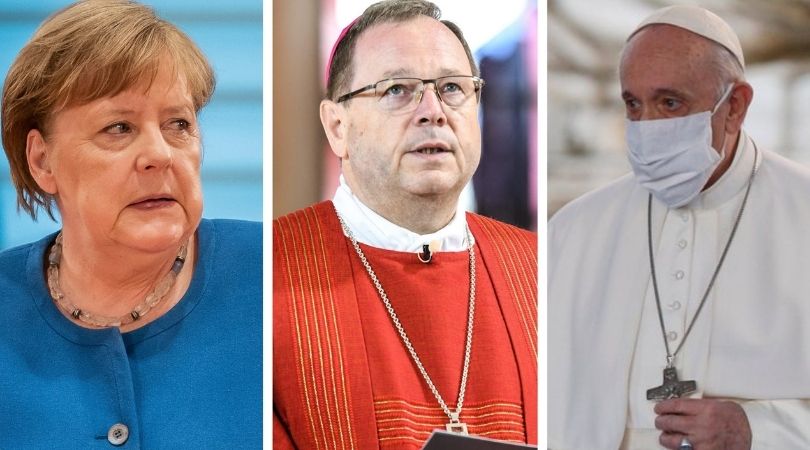 COLOGNE, Germany (ChurchMilitant.com) - Germans trust the Central Council of Jews (CCJ) and the Protestant church far more than they trust Pope Francis and the Catholic Church, a survey published Monday has revealed.

The results of the Forsa survey commissioned by Mediengruppe RTL (headquartered in Cologne) show the pontiff's ratings hitting rock bottom and ranking only six rungs higher than trust in Islam, which occupies the penultimate slot.

Despite the juggernaut of modernization launched by the German bishops to adapt to the zeitgeist, only 15% of Germans say they trust the Catholic Church, compared to 44% of Germans who express trust in the CCJ — the umbrella organization of Jewish communities.

Francis occupies the 19th place in the hierarchy of trust, while the Catholic Church is in the 23rd position on the chart, which grades trust in 26 institutions.

The pope ranks on the trust scale between entrepreneurs and employers' organizations.

The survey shows Germans having the greatest confidence in doctors (85%), followed by the police (80%) and universities (80%) and displaying the least faith in Islam (8%) and advertising agencies (4%).

In the heat of the Wuhan virus crisis, with trust restored to most institutions, the CCJ has climbed four percentage points (to 44%) and is now ahead of the Protestant church (36%).

However, trust in the Catholic Church has dropped (–1%), and it is now only ahead of the third-worst-rated group — "managers" (trusted by 9% of Germans).

Supporters of Alternative for Germany (AfD) — the conservative, nationalist political party — distrust almost all relevant institutions, according to the Forsa survey.

The 'representative of God on earth' is thus the biggest loser of the year.

"The ranking makes it clear again how deep the gap is between AfD followers and the majority of Germans," Forsa chief Manfred Güllner remarked.

Francis faced the greatest erosion of trust in 2018 when he lost the trust of 20% of Germans, with only 34% saying they trusted the pope.

Significantly, Pope Francis occupied the same place as the CCJ in 2018 (34%).

In 2019, the Catholic Church shared a place at the bottom of the "trust ladder" with insurance companies and banks.

Two years later and in the context of Francis' regular forays into the Wuhan crisis, trust in him has further plummeted, while public confidence in the CCJ has climbed.

"The 'representative of God on earth' is thus the biggest loser of the year," political geographer Gisa Bodenstein said in comments on the 2019 survey.

"In the 2015 confidence survey, which Stern commissioned at the time, the Holy Father achieved 60% — so he almost halved his trustworthiness within four years," Bodenstein observed.