VATICAN CITY (ChurchMilitant.com) - A premier globalist organization is praising Pope Francis for "put[ting] his stamp on efforts to shape what's been termed a Great Reset of the global economy in response to the devastation of COVID-19."

The World Economic Forum (WEF), which claims to be masterminding the "Great Reset," calls Francis an "agenda contributor" to the project in which "global stakeholders" will determine "the future state of global relations, the direction of national economies, the priorities of societies, the nature of business models and the management of a global commons."

A recent essay published by the WEF cites Francis' recent encyclical, Fratelli Tutti, and other controversial papal statements on economics, politics and health care, making the case for why the pope's policies offer a "prescription for resetting the global economy."

The WEF's endorsement of the pontiff follows exchanges since 2014 between Pope Francis and Professor Klaus Schwab, WEF founder and executive chairman and co-author of COVID 19: The Great Reset, which sets out "one path [that] will take us to a better world: more inclusive, more equitable and more respectful of Mother Nature."

Speaking to Church Militant, Catholic academic John Zmirak warned: "I have read fewer things more sinister than the WEF's latest production. While you and I might laugh at Pope Francis' clunky prose and sophomoric moralism, we see in the WEF's propaganda the dangerous uses to which Francis' ideas can be put."

Dr. Zmirak, editor at The Stream, noted that the pontiff is "an enemy of human freedom, and those who crave the chance to concretely strip us of our basic rights as Western men and Christians will not put a pope like this to waste."

Pope Francis seems to want God to work for the Great Reset.

"Just as the Nazis mined Medieval anti-Judaism to undergird their racism, the globalists who tomorrow will be seizing our kids if we won't vaccinate them will be quoting a pope to us as they do it," remarked Zmirak, author of The Politically Incorrect Guide to Catholicism.

The WEF essay eulogizes the pontiff for "deftly excommunicating about a half-century's worth of economic ideology," noting that "Pope Francis has issued a scathing indictment of neoliberalism" and "blames the 'dogma' of neoliberal economics for making us more vulnerable to COVID-19."

Neoliberalism, often associated with the economic policies of Margaret Thatcher and Ronald Reagan, seeks to transfer the control of economic factors from the public to the private sector, enhancing free-market capitalism and attempting to limit government spending, government regulation and public ownership.

Left-wing economists have attacked neoliberalism, with its call for more markets and less government as "a perversion of mainstream economics."

Pope Francis criticizes the "dogma of neoliberal faith" in his encyclical, adding that "the fragility of world systems in the face of the pandemic has demonstrated that not everything can be resolved by market freedom." He advocates for a political life not subject to the "dictates of finance," and for making human dignity the focus of new, "alternative social structures."

"Neoliberalism's free-market orthodoxy has been blamed for making health care systems and livelihoods especially vulnerable to the pandemic, and has drawn a clearer line under the need for active government intervention," the WEF essay emphasizes.

"In the ideals of the WEF, supposedly in pursuit of the common good, too much freedom is bad and control is good," explained Dr. McCrae, co-author of Moralitis: A Cultural Virus.

While you and I might laugh at Pope Francis' clunky prose and sophomoric moralism, we see in the WEF's propaganda the dangerous uses to which Francis' ideas can be put.

"The Great Reset may be appealing at first glance, but it is basically a program of surveillance and eugenics designed by technocratic atheists. Francis has recently given tacit support for contraception and promoted vaccination, which are both massive markets for Big Pharma — and which open the door to more radical forms of birth control," McCrae warned.

Francis seems to want God to work for the Great Reset. The egalitarianism of this grand vision is a mirage, true only in that the masses will be equally poor and powerless, presided over by an oracle of the global elite (of which Francis has registered his membership). As Christians we must hope that Francis sees through the propaganda and realizes that the Great Reset is ultimately dehumanizing for all but the 1%.

"A global plan called the Great Reset is underway. Its architect is a global élite that wants to subdue all of humanity, imposing coercive measures with which to drastically limit individual freedoms and those of entire populations," Viganò wrote.

The Vatican whistleblower identified "unscrupulous characters who finance the World Economic Forum" as the force "behind the world leaders who are the accomplices and executors of this infernal project."

"As is now clear, the one who occupies the Chair of Peter has betrayed his role from the very beginning in order to defend and promote the globalist ideology, supporting the agenda of the deep Church, who chose him from its ranks," Viganò noted.

While more skeptical Catholic commentators like Benjamin Sixsmith caution against overstating "the scale of elite coordination or cunning," even Sixsmith concedes that "when bad ideas are adopted internationally by some of the richest and most powerful people in the world, the effect can be the same."

"The Great Reset might be all the more terrifying for not being a sinister plot," he writes in The Spectator. 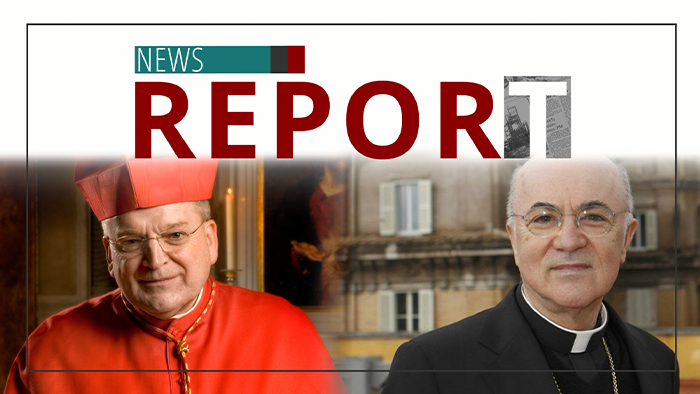