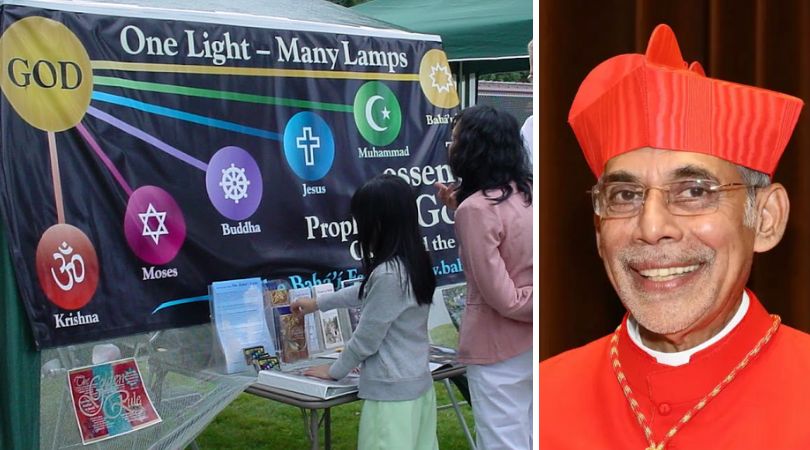 Catechists brainwashed with Bahāʾī doctrine of 'One light, many lamps'

PANJIM, India (ChurchMilitant.com) - Erroneous teaching is running riot in the Catholic stronghold of Goa under the newly-appointed Cdl. Filipe Neri Ferrão, with catechists being taught to uphold the Bahāʾī theology of religions and trash the uniqueness of Christ.

After defending clergy visits to idols of the elephant-headed Hindu deity Ganesh in September, and following a furious backlash from faithful Catholics, the diocese is now urging Catholics to hold interfaith prayer meetings and celebrate the Hindu festival of Diwali.

Jesus: 'One of the Lamps'

At a July seminar attended by over 2,000 catechists at the St. Joseph Vaz Spiritual Renewal Centre in Old Goa, participants were shown a slide of the Bahāʾī doctrine explaining how religions are "different lamps" emanating from the "one light" of an "unknowable" God.

The goal of the Bahāʾī faith is to overcome the disunity of religions and establish a one-world religion through the cultivation of brotherhood.

The Bahāʾī religion, founded in Iran in the 19th century by Mīrzā ʿAlī Moḥammad (Báb) and Mīrzā Ḥosayn ʿAlī Nūrī (Bahāʾullāh), believes that the world's major religions teach an identical truth despite their apparent differences. The religious writings of various faiths are recited in Bahāʾī temples during worship services.

The catechists are themselves very poorly catechized.

"Baha'is believe Jesus is who he says he is," writes Brent Poirier, a former Catholic seminarian who graduated from the Jesuit-led Loyola Marymount University and now promotes Bahaism. Bahaism has more than five million members in 235 countries.

Sources told Church Militant that many catechists were scandalized when Fr. Simião Fernandes, director of the Pastoral Institute St. Pius X, used the Bahāʾī slide to explain the relationship between different religions.

"Through the catechists, they are corrupting our children … Since they started such exercises, has the religious harmony increased or is it more vitiated now than earlier?" laments a catechist who exposed the Bahāʾī slide scandal on a Goan Catholic blog.

"The catechists are themselves very poorly catechized, and nobody dared to challenge Fr. Fernandes," a clergy source told Church Militant. "Worse, Fernandes was using the slide to elucidate Cdl. Ferrão's pastoral letter, which echoes the pluralistic theology of Bahaism."

The commandment of love is at the heart of every religion.

"The purpose of every religion is to help the human person grow spiritually, and the one who is spiritually enriched works towards fulfilling the dreams of bringing forth a new humanity. This new humanity, by transcending all barriers, embraces the entire humankind," Ferrão teaches, reiterating the chief doctrine of the Bahāʾī religion.

In an article titled "A Catholic or a Bahāʾī: Can I Be Both?" David Langness, editor of BahaiTeachings.org, writes, "We know that both Christ and Bahāʾullāh taught love, compassion and unity, so there certainly is no real distinction between either faith, from a Bahāʾī perspective.

Debunking the Myth of 'Love'

Scholars of religions have debunked the popular myth that all religions share "love" as a common core — especially when it comes to loving the "stranger" or the "enemy."

"The hatred of the foreigner is the oldest of passions, going back to tribalism and the prehistory of civilization," writes Dr. Jonathan Sacks, but it was the Hebrew Bible that uniquely called the Israelites to "love him [the stranger] as yourself, for you were strangers in Egypt."

"Nowhere is the singularity of biblical ethics more evident than in its treatment of the issue that has proved to be the most difficult in the history of human interaction, namely the problem of the stranger, the one who is not like us," Sacks notes in his book The Dignity of Difference.

"As the rabbis noted, the Hebrew Bible in one verse commands, 'You shall love your neighbor as yourself,' but in no fewer than 36 places commands to 'love the stranger,'" Sacks explains.

"The cardinal is expressing a common but unfortunately false assumption. Islam is striking among the religions of the world for having no universal commandment of love," distinguished Islamic scholar Robert Spencer told Church Militant.

"In fact, it expressly denies any such universal obligation in Qur'an passages such as these: 'Muhammad is the apostle of Allah. Those who follow him are ruthless to unbelievers, merciful to one another' (48:29)."

"The implications of the omission of a Golden Rule or any such idea from Islamic texts and teachings have been insufficiently understood among unbelievers, and this misapprehension has led and will continue to lead to numerous pitfalls, including complacency and naïveté in the face of a genuine threat," added Spencer, author of 22 books on Islam and the Middle East.

"The caste culture is so repugnant to the elementary teaching of all the great religions of the world that we cannot find fault with the Muhammadans or the Christians if they feel an instinctive revulsion towards the caste-infected Hindu," writes Swami Dharma Theertha.

In his book History of Hindu Imperialism, Theertha demonstrates how "caste discrimination," not "love," is at the heart of Hinduism. "Sixty million untouchables may renounce Hinduism in a body; Brahmanism would stick to its guns," he points out.

Meanwhile, in the latest issue of the Goa diocesan magazine, Renovação, Fr. Aleixo Menezes, editor and rector of Goa's Patriarchal Seminary of Rachol, is drawing parallels between the Hindu lamp (dipa) lit for the festival of Diwali and the paschal candle symbolizing Christ.

Offering a detailed explanation of the Hindu festival, the priest urges Catholics to "discover the richness of the symbolism, which crosses the boundaries of religion." Menezes was also slammed for his earlier article promoting clergy visits to shrines of the Hindu idol Ganesh.

Why is Cdl. Ferrão promoting the master symbol of a masonic relativism?

Speaking to Church Militant, eminent scholar of Hinduism Fr. Victor Borde explained that "the rationale used to celebrate Diwali is the fact that the symbolism of light is used in practically all the religions."

"Although burning an oil lamp as Hindus do during Diwali is an a-religious act, it is not so for the Vedic Hindus. Fire for them is god — Agni devata, who is worshipped in various ways," Borde said, debunking Menezes' false analogy between the paschal candle and the dipa.

He explains how "Brahmanical Hinduism has wiped out the indigenous religions of India which existed prior to the arrival of the Aryans, while some of the tribal religions continue to be assimilated into the Vedic religion of Sanatana Dharma."

"It is clearly too simple, however, to think that because followers of different religions assent, on occasion, to similar sets of moral precepts, they therefore must share moral common ground in some significant way," writes historian of religion Peter Donovan.

In September, Menezes used a featured picture on the cover page of Renovação that portrayed symbols of the major world religions, including the Cross, on flower petals — all equidistant from the center.

Over 700 Catholics signed an online petition blasting the Renovação iconography for downgrading the Cross of Christ "by placing it on par with the Islamic crescent, the Hindu OM, the Buddhist dharmachakra, the Sikh khaṇḍā and other symbols in the pluralist pantheon."

"Why is Cdl. Ferrão promoting the master symbol of a masonic relativism where Christ is dethroned from his position as the only way to God and demoted to one of the many ways — all pointing to an amorphous construct of "love" (represented by the rather juvenile symbol of a heart)?" the petition asked.

The cardinal notes that many Catholics in Goa, a former Portuguese colony evangelized by St. Francis Xavier, have left the Catholic Church and "have joined other ecclesial communities or sects" because "we have neglected Jesus' commandment of love."

"Ferrão refuses to admit how a growing syncretism promoted by Indian clergy and the total abandonment of evangelism based on the uniqueness and definitiveness of Christ is one of the main reasons why people are leaving the Catholic Church," a priest observed. 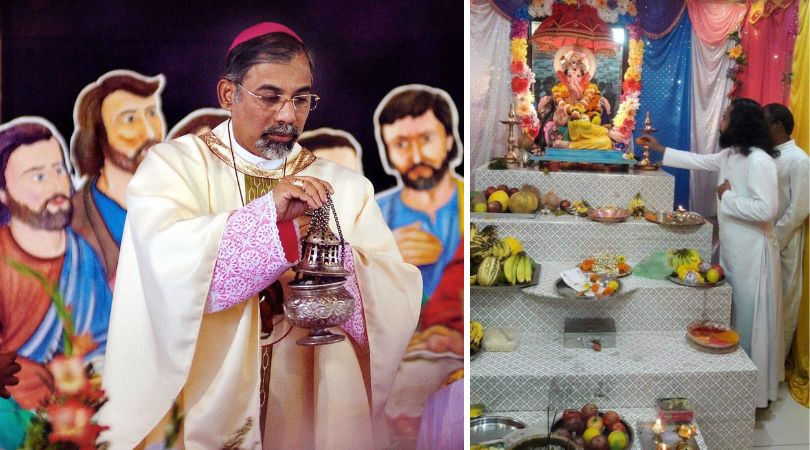 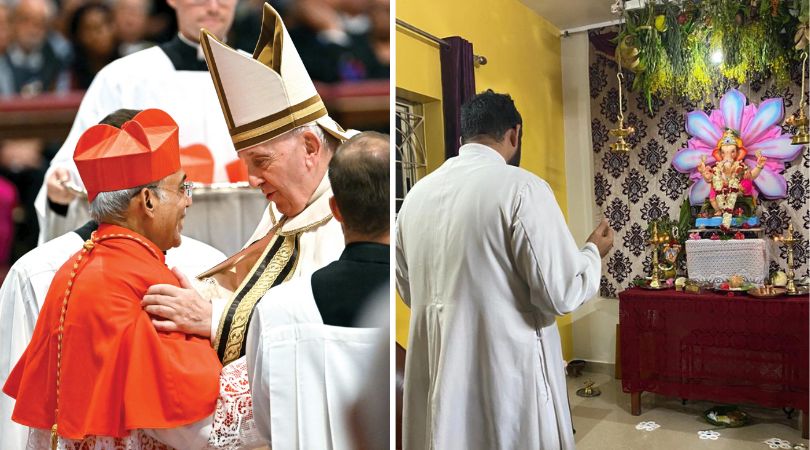 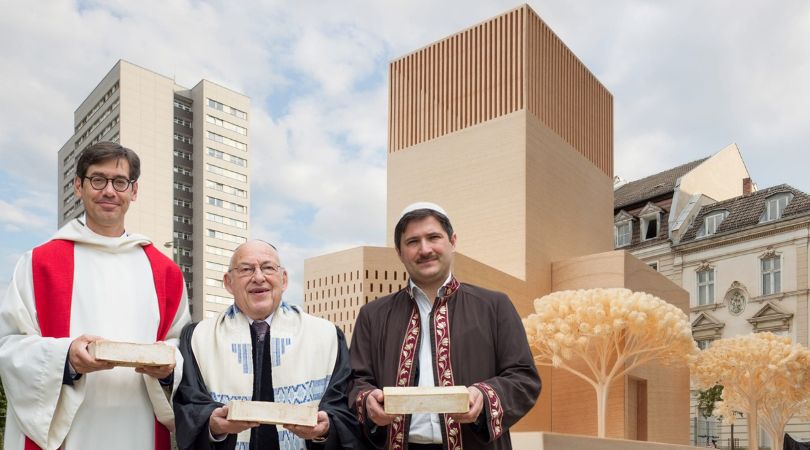