‘God Does Not Punish’ 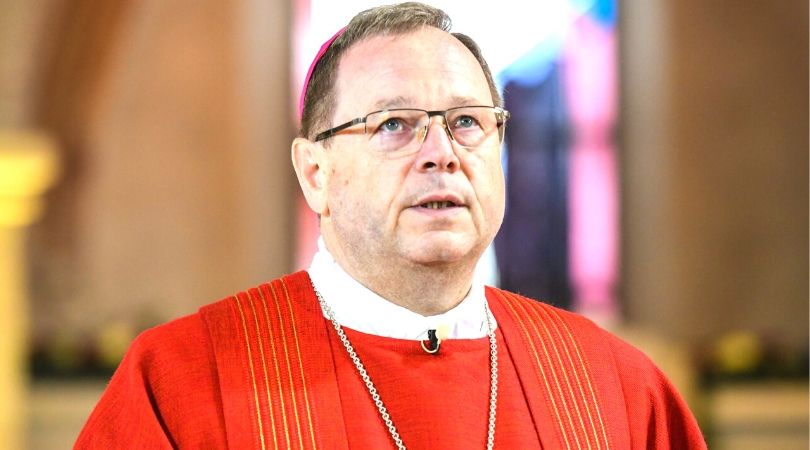 LIMBURG, Germany (ChurchMilitant.com) - The new president of the German bishops' conference, Bp. Georg Bätzing of Limburg, is telling his flock that the Wuhan virus is not a chastisement from God.

"God does not punish" said the newly installed (March 3, 2020) president in a livestreamed broadcast on the Feast of St. George. Comparing the blood-thirsty dragon with the pandemic, Bätzing told his audience:

There is something, this image of the dragon, which we will and must fight against, for which we must accept restrictions, but which we will defeat with wisdom and solidarity and power and our faith in the power of life. This monster which St. George conquered, could be compared to the monster Corona. The knights martyrs and fighters who could defeat this monster are the people themselves.

He went on to say that the way to defeat this Corona dragon was "with the power of science, with reasonable behavior that is in solidarity and protects me and you, and with the power of our faith, which knows that the power of life is stronger than death and all menace. That's our Easter belief."

His remarks, which in addition to being livestreamed, were later summarized and published on the diocesan website.

But Bätzing's most controversial statement was his expressed puzzlement that anyone would see the virus as God's punishment. Forgetting the example of Ananias and Sapphira who were struck dead for lying (Acts 5), he said, "My God has not known such thoughts since Jesus died for us. That is where God made his decision for life. God does not punish."

Bp. Georg Bätzing went on to say that the way to defeat this Corona dragon was 'with the power of science.'

The German bishops' conference, which Bätzing now leads, is among the most theologically liberal in the world. These are the same men who are following what is called the "synodal way [or path] of the Catholic Church in Germany."

As Church Militant has previously reported, the synodal path discussion launched on Jan. 30. It will be a two-year, 200-member synod, which would include bishops and laity. The group would, in all likelihood, include a substantial number of representatives from the leftist Central Committee of German Catholics (ZdK), a leading advocate of women's ordination and "modernization" of Church teaching on homosexuality.

According to the synod's draft statutes, the group plans to address four key themes: authority and separation of powers; sexual morality; the priestly mode of life; and women and the service of ecclesiastical offices.

To their critics, synod leaders say their gathering isn't really a synod. Instead, they are creating a "synodal path," a first step that will lead to Rome for further discussion, possibly a Third Vatican Council.

In what many believe is an effort to combat left-leaning German bishops, Pope Emeritus Benedict XVI recently established the Tagespost Foundation for Catholic Journalism, which would train journalists and pursue special projects, including research on topics related to biomedical ethics. To some in German Catholic leadership, his action implied that authentic Catholic voices were not finding a media outlet in Germany.

One media outlet characterized his work as being "more concerned with pleasing 'the public' than with presenting and explaining the teaching of the Church."

Feminizing the Church in Germany
By Paul Murano   •   0