Gorsuch Shows Himself a Worthy Successor to Scalia

Pessimism over the presumed Supreme Court justice is unfounded

The confirmation hearings are complete, and the man nominated by President Trump to help roll back Roe v. Wade made it through without major incident. Yet after four days of Neil Gorsuch's originalist bona fides on display, some Catholics are expressing pessimism over the man who will most likely be confirmed to the Supreme Court next month.

Pessimism is never foolish in such a context. After all, similar hearings gave us the likes of Anthony Kennedy and David Souter, who not only failed to counter the Court's illegitimately gotten power, but helped to extend its perverse limits. But in the case of Gorsuch, there is good reason to believe such pessimism is unfounded.

While much of the Colorado jurist's personal opinions remain an enigma, we know enough about his jurisprudence to believe that Gorsuch is likely to carry on the project of his predecessor Antonin Scalia, and roll back the major social changes the Court has imposed on the country.

Cynics are pointing to some of Gorsuch's phraseology during the confirmation hearings. Questioned about abortion, Gorsuch replied, "The Supreme Court of the United States has held in Roe v. Wade that a fetus is not a person for purposes of the 14th Amendment. That is the law of the land. I accept the law of the land."

Gorsuch took a similar tack with regard to Obergefell v. Hodges, which legalized gay marriage, telling senators it "is absolutely settled law."

Should Gorsuch's statements that these contentious decisions are the "law of the land" and "absolutely settled law" cause worry among Catholics?

No. As abhorrent as these decisions may be, Gorsuch is merely stating indisputable fact. The Supreme Court is the highest court in the land, and when the Court makes its decisions, it is settling any disputes about the law. Unless we are willing to turn back 200 years of precedent, the Court's holdings are indeed the law of the land, and Gorsuch is merely rehearsing the basics of constitutional law in stating this.

On the contrary, if Gorsuch were to deny these decisions were law, he would call into question his own competency and his ability to be effective as a justice. Why would any senator vote for a justice who does not believe in his own power to affect the law?

Others have pointed to Gorsuch's seeming equivocation on his belief in a right to life.

Asked in an exchange with Louisiana Republican John Kennedy whether his opposition to assisted suicide was correct, Gorsuch claimed, "I might be right and I might be wrong." This self-deprecation must be seen in light of the fact that Gorsuch was trying to divorce his academic, polemical self from his role as judge, which must be impartial. Assisted suicide is the one political issue that Gorsuch has taken a clear, unambiguous stand on, and his statement is an assertion that, as a judge, he will keep an open mind on all topics, even his own work.

Does his answer suggest he is reneging on his pro-life beliefs? Unlikely. Gorsuch's book was years in the making, and shows depth and sincerity of thought. If he is deceiving us on his pro-life views, his deceit has endured for years, and he is truly one of the greatest prevaricators in American history.

More enlightening than anything Gorsuch said is what the nominee failed to say in the hearings.

Gorsuch was asked Tuesday for his opinion on Griswold v. Connecticut, the 1965 case that declared a right to contraceptive use within marriage. Gorsuch referred to precedent, again calling Griswold the "law of the land," aoting that the opinion had been re-affirmed by courts countless times, and that if a state were to claim it could make contraceptive use illegal once again, "I can't imagine the Supreme Court of the United States taking that claim seriously."

But note what Gorsuch did not say: that the legal foundation behind the case was correct. Remember that the legal claim made in Griswold is that contraceptive use is a right protected by the Constitution. No one who wrote the Constitution ever intended to include anything about contraception in it, and no reasonable person could read the document and think they had. Yet the justices who wrote the 1965 opinion made that legal claim anyway. Gorsuch's non-response suggests he is aware how weak this reasoning was and is. His failure to endorse it resounds as loudly as anything he actually said during the hearings.

Compare Gorsuch's answer to his predecessors' during their confirmation hearings:

Catholic John Roberts said about Griswold: "Absolutely, I agree, there's a right to marital privacy, and I agree with Griswold."

Catholic Samuel Alito in reference to Eisenstadt v. Baird, the case that extended a right to artificial birth control to single people, said: "I do agree also with the result in Eisenstadt."

We don't know what Episcopalian Neil Gorsuch personally believes about the morality of contraception. But as Gorsuch emphasized again and again in his hearings — and we have no reason but speculation to disbelieve him — his personal opinions are immaterial when interpreting the law. And in interpreting the law, Gorsuch is committed to the commonsense approach of reading the Constitution based on what it actually says.

To put the matter another way: Why would Gorsuch otherwise not commit to supporting contraception? His own religion does not preclude him from doing so. Republicans are too craven to make contraception an issue, and his support might pick up a Democrat or two and ensure his appointment. Years in academia and the judiciary have undoubtedly given Gorsuch many opportunities to compromise his principles, and to find weasel words and philistinism that allow him to claim the Constitution contains a right to contraception. Despite all these pressures, Gorsuch has not succumbed.

It takes both intellectual honesty and moral courage not to give in to such a specious right, and Gorsuch has shown these qualities. This is more than can be said for Catholics on the Court, who in recognizing that fictitious right render unto Caesar what Caesar has never asked of them.

There is a great difference between accepting a ruling and accepting the logic behind the ruling. Gorsuch displays little sign of accepting the logic behind the Court's worst decisions. This is why Catholics should be guardedly optimistic about a Justice Gorsuch. It is true that we don't accurately know his opinion on a host of social issues. But if Gorsuch is true to his judicial principles, his personal views are irrelevant.

If we are wrong, and Gorsuch does turn out to be a Souter-like squish, it will be owing to his great deception, not our moderate hopes. 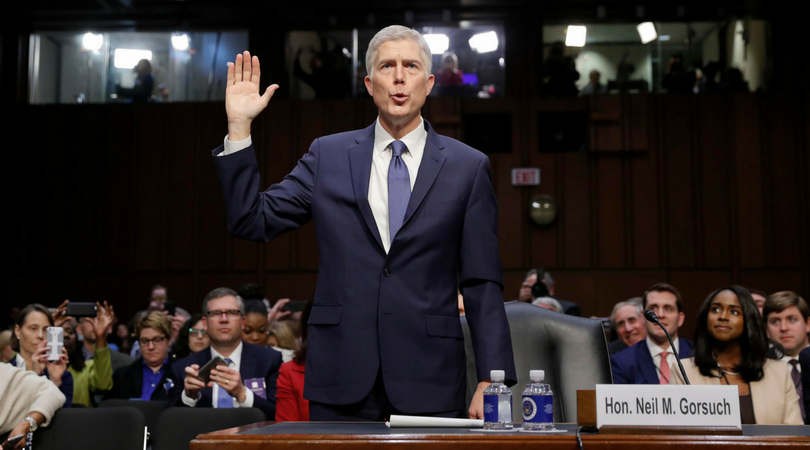