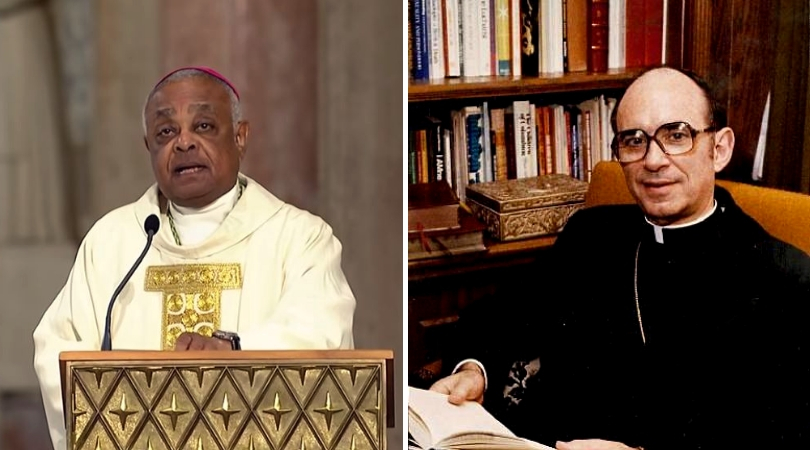 Archbishop Wilton Gregory became head of the Washington D.C. archdiocese this May. Previously, he served as archbishop of Atlanta, Georgia.

In an interview published online on Wednesday, the archbishop named Cdl. Bernardin as his main mentor.

"My mentor for being a bishop was Cardinal Joseph Bernardin," Gregory told Washingtonian. "I was his auxiliary. Anything I do well as a bishop I place at his feet. Anything I goof up I learned on my own."

My mentor for being a bishop was Cardinal Joseph Bernardin.

He went on to say, "He was a mentor and a friend and a father and a brother. Just watching him being a bishop taught me a lot — how he handled people, how he approached difficulties, how he sought to resolve issues and respond to needs."

As Church Militant has noted before, Gregory was an auxiliary bishop in the Chicago archdiocese under Bernardin.

Gregory's interviewer, Washingtonian's assistant editor William Elliot, said as a follow-up, "I've read that Cardinal Bernardin was criticized at times because he wasn't afraid to make decisions — giving laypeople positions of authority, for example — that might upset more conservative Catholics."

One of his trademark ventures was the Common Ground effort: inviting people who had often diametrically opposed opinions on Church issues to talk with each other. Before Pope Francis said that you've got to encounter people, [Cardinal Bernardin] was saying, "People have to talk to each other." That got some serious pushback.

But Cdl. Bernardin has been accused of far worse things than "giving laypeople positions of authority" and getting people who disagree "to talk with each other."

This past June, Church Militant shed light on an allegation of child sexual abuse against Bernardin. The allegation accuses Bernardin of raping a minor as part of a satanic ritual in 1957 when he was a parish priest in South Carolina.

Bernardin was known as a leading liberal in the U.S. bishops conference — known at the time as the National Conference of Catholic Bishops (NCCB) — even serving as president of the conference in 1974-1977.

During Bernardin's time as president, he and his associates pushed to normalize the lay reception of Holy Communion on the hand during a May 1977 NCCB meeting. The measure passed with a vote, but several key requirements enumerated by the Pope for allowing Communion in the hands were completely ignored.

Archbishop Gregory, meanwhile, facilitated the spread of pro-gay messaging in the Atlanta archdiocese during his years there.

Gregory allowed the Shrine of the Immaculate Conception in Atlanta to participate in a gay pride parade year after year.

In 2013, Gregory welcomed dissident pro-gay group Fortunate Families into the archdiocese of Atlanta.

In 2015, he offered Mass for a theologically dissident pro-LGBT retreat that took place at the chancery.

This year, when Gregory was installed as new head of the Washington, D.C. archdiocese, Fortunate Families in Atlanta paid for a rainbow-colored advertisement thanking their former archbishop and wishing him well in his new post.

Archbishop Gregory has also been accused of covering up clerical sexual misconduct.

Back in 2004, when Gregory was bishop of Belleville, Illinois, he was held in contempt of court for refusing to release mental health records related to a sex abuse case involving a retired priest.

In 2018, the archbishop pushed back against the Hidden Predator Act, a Georgia bill that would have extended the statute of limitations from age 23 to 38 for victims of child sexual abuse. The bill also would have allowed child sex abuse victims to sue both their alleged abusers and the organizations that enabled the abuse.

That was just a few months before 2018's "summer of shame" for U.S. Catholics, when homosexual abuse claims came to light against now-laicized ex-cardinal Theodore McCarrick, and a grand jury report in Pennsylvania listed sexual abuse allegations against hundreds of Catholic clergy.

In addition to his ties to Bernardin, Abp. Gregory also had ties to McCarrick. After news broke last year of abuse allegations against McCarrick, Abp. Gregory said in a statement, "I am hurt, because my respect and fraternal esteem for Theodore McCarrick were clearly misplaced."

In 2013, Gregory restored a priest to active ministry who had been removed for homosexual activity. That priest, Fr. Juan Fernando Areiza, was removed from ministry in 2010 after evidence came to light that he violated priestly celibacy in a consensual gay relationship.