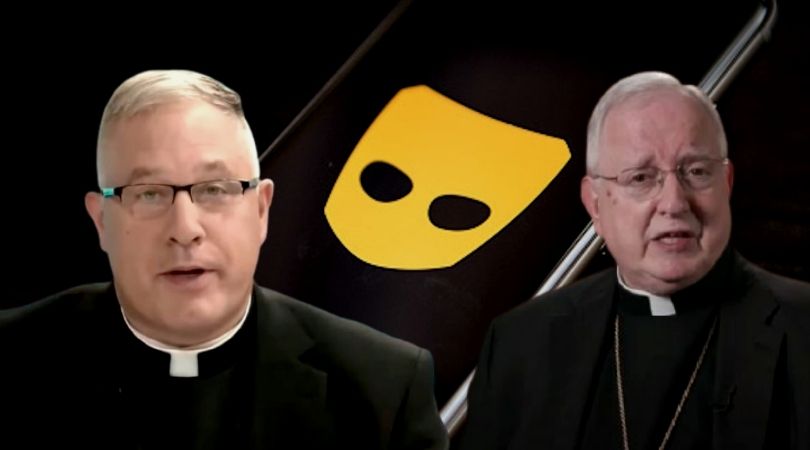 So why doesn't his bishop make it official?

As of this morning, it has been a couple of days now, and the bishop of La Crosse, Wisconsin, William P. Callahan, has yet to remove the faculties of the disgraced former general secretary of the United States Conference of Catholic Bishops (USCCB), Msgr. Jeffrey Burrill, whose homosexual escapades on the Grindr app were recently exposed. As Callahan wasted no time removing the good priest Fr. James Altman from his parish (St. James the Less) and stripping him of all his priestly faculties, it stands to reason that Callahan would have promptly removed Burrill's faculties as well. So why the pause?

Is Callahan waiting for the pictures of the monsignor's multiple escapades to be hand-delivered? In the eyes of the American Roman Catholic laity, Msgr. Burrill — by his own actions, in and by these sinful behaviors — is already self-laicized. No faithful, churchgoing Roman Catholic cares at this point whether or not Bp. Callahan issues a request to Rome for Burrill's laicization from the priesthood. In their minds and hearts, this man and his exercise of priestly ministry in the Church is history. Burrill is toast.

Bishop Callahan wrote on July 20 to priests in his diocese: "The media reports establish no facts in truth about Jeff's behavior, either innocent or not."

Really, Bp. Callahan? Do you think the general public is so daft as to believe something you say even if in doing so we must jettison all use of our rational faculties? The Pillar published what it did about Msgr. Burrill's use of the Grindr app because it "had the goods" on him. If you really believe its story is fabricated, immediately file a defamation suit against The Pillar. Certainly, the faithful would like to get to the bottom of all this, and the discovery process should really bring to light all this alleged immoral behavior.

What type of father, in any sense of the word 'father,' does not rebuff his son for doing something stupid, let alone gravely sinful?

Now, all that is left — for Burrill to save his soul — is full repentance for his sins and a life far removed from any ministry in the Church. Additionally, the Church owes a man like this neither room and board nor a meal allowance while he gets his act together as a now-disgraced priest. He has already conned a "living" from the body of Christ by living a double life for years. The faithful owe him nothing more. If any money gets exchanged, Burrill should repay those parishes and ministries from which he pocketed a salary for years to pay for his gay lifestyle, contrary to the Faith.

What is most galling about Callahan's lack of response is that he has not chastised his spiritual son, "his priest," in any way whatsoever — no challenge to his charge, as a son of God, to live as such and repent from all sin and embrace a life of holiness! Not a word! How tragic and how sad. What type of father, in any sense of the word "father," does not rebuff his son for doing something stupid, let alone gravely sinful?

Additionally galling is Abp. José Gómez's lame announcement about Burrill's departure as the USCCB secretary. Gómez does not offer any priestly advice whatsoever — either to Burrill, who's being dismissed for a gravely sinful double life, or to the faithful to whom he writes!

What's this B.S. about Burrill not doing the "big nasty" with minors? Does he really know this? Does Gómez, as the head of the USCCB, have any evidence whatsoever that Burrill never engaged in sex with a minor? Does Gómez expect lay Catholics to believe what he writes simply because he asserts this in his letter? We are no longer passive ignoramuses who, just because an archbishop asserts something in a nicely worded letter, believe what is written is factual. For the record — whether the abuse victim is 11 or, say, 19 — the pain of homosexual predation hurts just the same. How insensate can Gómez be?

This entire lot of homosexual bishops and homo-friendly bishops and priests has to go! These gay men have neither the aptitude to govern the Church well nor the spiritual graces required. Until some visible and serious acts of penance and reparation have been done, the faithful at this juncture have written off the lot of you — laicized you by default, as St. Paul did to Alexander the Coppersmith. To all the homosexual bishops and homosexual priests, May God be merciful to your souls!