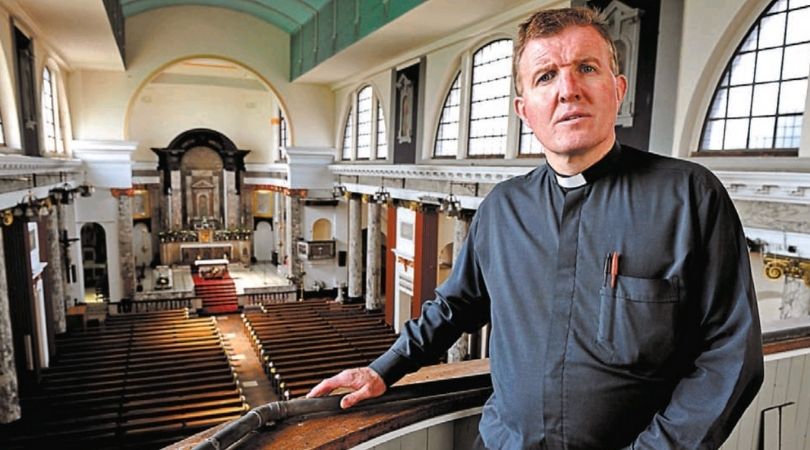 'Why obey a government advocating abortion, sodomy and transgenderism?'

GLASGOW, Scotland (ChurchMilitant.com) - An outspoken priest is blasting Scottish bishops for cowardice in the face of the COVID-19 crisis after witnessing faithful Catholics "being denied entry" into their church on the Feast of St. Michael the Archangel.

Father Stephen Dunn published an open letter Tuesday expressing how "deeply saddened and angered" he was to see Catholics turned away, "because there were already 50 people in the church and in obedience to Abp. Philip Tartaglia and the guidelines issued by the archdiocese and the Bishops Conference of Scotland."

"I was subsequently told that a man, his wife and his child, having traveled 15 miles were turned away a couple of weeks ago, again because 50 were already in," wrote Fr. Dunn, who has served 26 years in the Glasgow archdiocese.

"This is disgraceful, shocking!" exclaimed Dunn quoting Jesus' words: "Could you not spend one hour with me?"

"No, you can't, because Philip Tartaglia and the Scottish Bishops Conference says no – only 50 are allowed in; we are going to be obedient to government guidelines and not allow any more than 50 people in," he remarked.

"Obedient to a government which advocates adultery, abortion, sodomy, and transgenderism? Please tell me one of those that is pleasing to God?" he asked, slamming the Scottish government — currently considered to be promoting the most radical anti-Catholic legislation.

"Why are the bishops of Scotland being obedient to such law makers?" Dunn questioned, naming First Minister of Scotland Nicola Sturgeon's regime as a "fascist, Communist government."

Dunn made news in 2011 after he began to learn the Traditional Latin Mass (TLM) so he could bury his father, who "had stipulated in his will that he is to be buried to the Tridentine Mass and no other Mass." The TLM was met with initial hostility in the archdiocese.

You, bishops of Scotland, you are the ones who cause outrages, sacrileges and indifference, by denying the sheep time in the Real Presence of Jesus.

Expressing his disappointment with "COVID coward bishops," Fr. Dunn told Church Militant he'd been "very frightened for souls in recent years, something which has come to a climax at this point in time in the world."

"Bishops and priests are gravely failing to preach and practice Christ's message in its entirety in the Gospels," he said. "They choose little morsels of Christ's word which please the world and the flesh, and so 'don't rock the world's boat' like Christ did with the Truth."

"As a result, many are presently following the ways of the world which will lead to damnation. Priests and bishops telling people: 'Oh, it's okay, don't worry, God loves you and will forgive you," he continued.

"But God will forgive you only if you confess your error in full and return like the Prodigal Son. Anything short of this will fail you as Christ tells us in the Gospel: 'branches that do not bear fruit will be gathered and burnt in the fire, a fire that will not go out!'" Dunn stressed.

"Our Lady warned at Fatima, Russia will spread her errors throughout the world, causing wars and persecutions of the Church," the priest noted in his letter, quoting the prayer taught by the Angel to the children at Fatima — a prayer begging "pardon for those who do not believe, do not adore, do not hope and do not love" the Lord Jesus.

"You, bishops of Scotland, you denied adoration, you are the ones who presently cause outrages, sacrileges and indifference with which He Himself is offended, by denying the sheep time in the Real Presence of Jesus. And at a time when they need it most," Fr. Dunn excoriated.

Every deplorable and wretched bishop who locked the churches and denied people access to the Holy Mass, the Holy Eucharist and the sacraments will have blood of every lost soul upon their heads.

"Was Jesus scared to touch the lepers?" he asks.

"Each place of worship should make its own decision about when it is ready to do this and should only reopen if this can be done safely," the guidelines state.

"With our churches now re-opened, we still face significant restrictions on our worship. While undesirable, these are necessary if we are to minimize the risks of gathering in confined spaces," wrote Bp. Brian McGee, chair of the COVID-19 Pastoral Ministry Working Group, in a recent Bishops Conference of Scotland newsletter.

Faithful Catholics in Glasgow told Church Militant they felt as if they were "under a kind of double tyranny: on the one hand arbitrary restrictions on our basic freedoms (justified by the Scottish Government on health grounds but with little evidence justifying this) and, on the other, punitive restrictions on access to our churches."

"Older Catholics are distraught and younger people are even starting to wake up to the disproportionate and illogical nature of the conditions. There's a profound silence and lack of leadership from our bishops and many clergy which is completely bewildering to Catholics who feel 'like sheep without a shepherd,'" they said.

Father Dunn's Scottish admirers are comparing him to American priest Fr. Altman, who, as Church Militant reported, denounced bishops for cowardice in the face of the Wuhan virus scare.

"Every deplorable and wretched bishop who locked the churches and denied people access to the Holy Mass, the Holy Eucharist and the sacraments will have blood of every lost soul upon their heads," Fr. Altman preached, pointing out that the Church has weathered pandemics, famines and wars for 2,000 years.

"With such chief shepherds as we have, sorry Lord Jesus, it looks very unlikely," he laments. 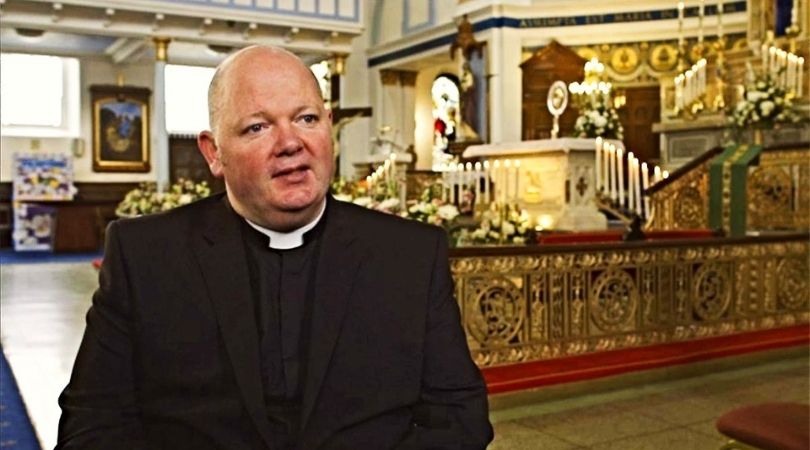