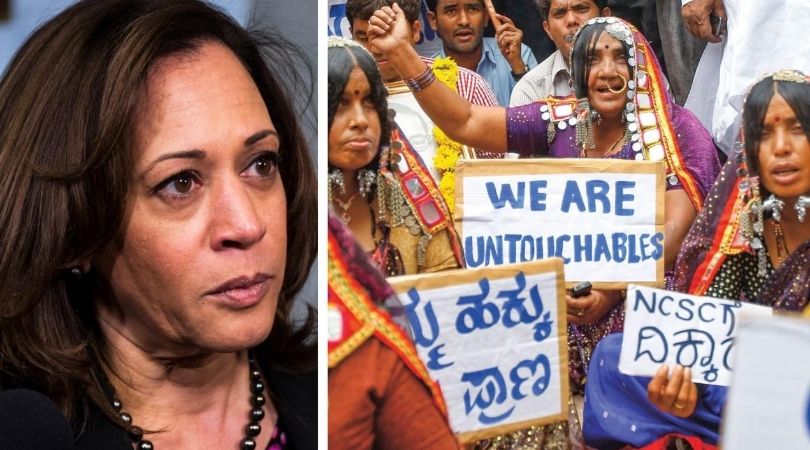 WASHINGTON (ChurchMilitant.com) - Democrat vice presidential-nominee Kamala Harris is expunging her oppressive Hindu high caste ancestry from her narrative in an attempt to portray herself as a "black" person from an oppressed minority background.

In her 2019 autobiography The Truths We Hold: An American Journey, Harris acknowledges "there is no title or honor on earth I'll treasure more than to say I am Shyamala Gopalan Harris's daughter."

Harris nowhere mentions that Gopalan hails from Hinduism's highest and most privileged caste — the Tamil Brahmin priesthood — regarded by "untouchable" and lower castes as India's most racist and oppressive institutions.

Harris makes numerous references to her Indian ancestry, writing how her maternal family "instilled us with pride in our South Asian roots."

"We were raised with a strong awareness of and appreciation for Indian culture," she emphasizes.

But the authoritarian racism and obdurate exclusivism of her mother's Brahmin family — which would have viewed her Jamaican-born, black-skinned father with the utmost contempt — is airbrushed from her story.

"In Indian society we go by birth," Gopalan said in a 2003 interview. "We are Brahmins, that is the top caste... For Brahmins, the bloodline is the most important. My family, named Gopalan, goes back more than 1,000 years."

"The very fact that Harris' mother married a dark-skinned Jamaican — someone in skin color closest to a Tamil untouchable — would suggest that Shyamala Gopalan did not share her community's racism, even though she most definitely shared the "white privilege" of her Tamil Brahmin caste," observed Gomes.

Gomes, translator and annotator of Pandita Ramabai's America: Conditions of Life in the United States, elaborated:

This is precisely where her mother's experience runs against Harris' own ideological penchant for identity politics. If Donald Trump had a parent from a highly privileged and utterly racist background — say the KKK — Harris-Biden, the mainstream media and the cultural Marxist cabal would have canceled him completely because of his group identity.

"Harris should now apply the same identity politics yardstick to herself, confess her 'Brahmanical privilege,' and make reparation for the sins her ancestors have committed over the last three millennia," Gomes remarked.

If Trump had a parent from a privileged and racist background — say the KKK — the Marxist cabal would have canceled him because of his group identity.

A hymn from the Purusha Sukta of the Hindu scripture Rigveda specifies four main categories or varnas — varna means color as well as class.

The highest caste Brahmin (priest) is born god's mouth, the Kshatriya (warrior) is born from the deity's arm, the Vaishya (businessman or trader) comes from god's belly, and the Shudra (menial) from the Creator's foot.

The untouchable (Dalit) is the "unborn" emerging from outside the body of the Creator with no physical link to the Supreme Being and a different species like an animal or subhuman.

The Manusmriti describes the untouchable as "polluted" and "unclean" from birth. He violates, by his very existence, the Brahmanical obsession with hygiene and is perpetually filthy, according to Louis Dumont's book Homo Hierarchicus: The Caste System and its Implications.

Religious texts assign skin colors to the castes: Brahmins are white, Kshatriyas are red, Vaishyas are yellow and Shudras are black. The colors are based on the predominance of a quality or virtue (guna) in their nature (prakriti).

In a Ph.D. dissertation titled Brown Skin, White Dreams: Pigmentocracy in India, Komal Dhillon describes how skin color is intrinsic to Indian racism: "Benefits for those on the lighter end of the skin color spectrum [e.g. Brahmins] are recognized and leveraged in accordance with the systemic logic of being naturally superior."

"Conversely, often those on the darker end of the spectrum are perceived as inferior (by others as well as themselves), thus perpetuating the superiority of whiteness," Dhillon writes.

These atrocities do not include "the stripping and parading naked, the forced shit-eating (literally), the seizing of land, the social boycotts, the restriction of access to drinking water," writes Arundhati Roy, winner of the Man Booker Prize for Fiction.

Writing in the Wall Street Journal, Indian writer Sadanand Dhume notes that Harris' Tamil Brahmin background "undercuts many of the pieties of the U.S. left."

"Kamala Harris might, for instance, have known that most Tamil Brahmins would have had a stroke if a daughter of theirs brought a black husband home" and "might have encountered Tamil Brahmins who let their discomfort with 'miscegenation' show," writes Indian author Mukul Kesavan.

"The unreconstructed racism of most middle-class Indians towards people of African origin is a fact that every honest desi [Indian] acknowledges," he adds.

In 2018, Twitter CEO Jack Dorsey was pilloried for holding up a poster that read "Smash Brahminical Patriarchy" and forced to apologize after upper-caste Hindus called his message Hinduphobic.

Historians acknowledge that conversion to Christianity liberated millions of untouchables from the caste system, estimating that about 65–70% of Indian Christians come from a Dalit background.

Mrs. Gopalan left India for Berkeley in 1958 to pursue a doctorate in nutrition and endocrinology and later became a breast cancer researcher. "Her marriage [to Jamaica-born economist Donald Harris] was as much an act of rebellion as an act of love," writes Kamala Harris. The couple divorced when Harris was still a child.