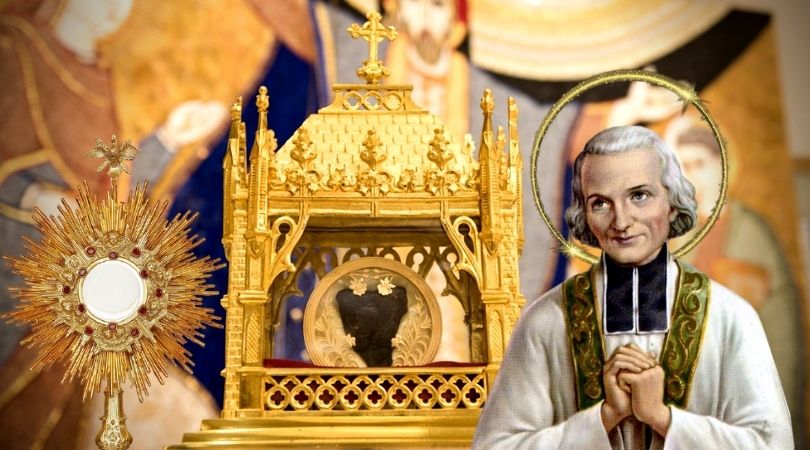 Being a Catholic is an all-out spiritual war, something the Cure of Ars, the nickname for St. John Vianney, understood well.

In 1790, France was reeling from the Reign of Terror — when Freemasons overthrew the king, murdering priests and religious.

Vianney was born in 1787 to Catholic parents who were faithful and devout. His family traveled far to attend Mass secretly as priests were still being hunted by the satanic government. John thus understood and admired the priests' heroism and their willingness to risk their lives in order to bring Christ to the people.

He was taught Catechism in the home by two nuns who were secretly teaching the Faith. At 13 years old, he received his first Holy Communion in a kitchen during a neighbor's house Mass.

His earliest experiences taught him how Catholics must militantly retain and pass on the glories of the Faith.

Fast-forward years later, he was ordained a priest in August 1815 and made priest of the small town of Ars in 1818. Partly due to the French Revolution, the people there devolved into lives of debauchery and hatred of sacred things.

At first, he preached homilies to just a few women who attended daily Mass, but in a short time, people came from all over France to hear him. Besides administering the sacraments, including spending up to 16 hours a day hearing confessions, he taught Catechism and started an orphanage for girls.

He would retreat to his rectory for dinner, frequently allowing it to become spoiled before eating it. Then, when going to get a few hours of rest, the demons would appear to him, shake his bed and set it on fire.

In his homilies, he did not hesitate to warn people they were hurling themselves headlong into Hell. He preached against spiritual laziness, inordinate love of pleasure, blasphemy and scandalizing young souls.

In his homilies, he did not hesitate to warn people they were hurling themselves headlong into Hell.

He warned, "Parents, know that if your children go to Hell, be sure that they will join you ... who will be already waiting for them."

People today are not used to shepherds admonishing their flocks so forcefully, but the saint understood the dire peril of souls and his duty to remind them of this spiritual peril.

He died in 1859 at 73 years old, having converted thousands of people. He was so effective as a lowly parish priest that the demon once told him, "If there were three such priests as you, my kingdom would be ruined."

Learn more by watching The Download—Heart of a Priest.