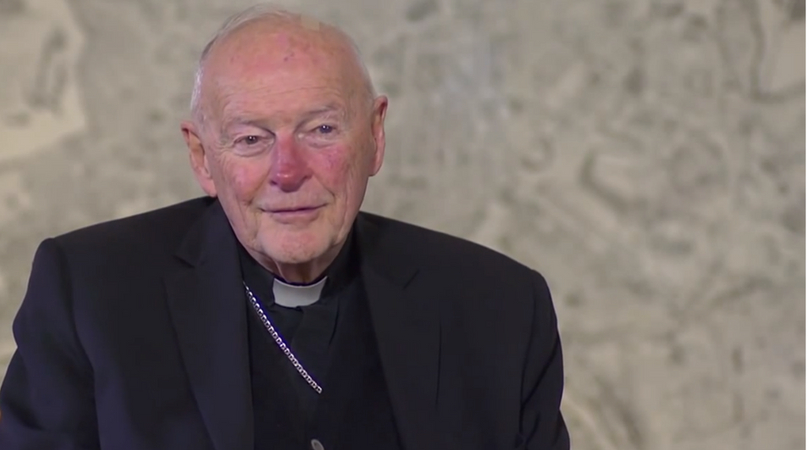 Cdl. Theodore McCarrick forced to step down from public ministry

NEW YORK (ChurchMilitant.com) - A prominent American cardinal is being accused of sexually abusing a minor.

Wednesday morning, the New York archdiocese issued a statement detailing the allegations made against former Washington, D.C. archbishop Cdl. Theodore McCarrick, which involved claims of abuse of a minor more than 45 years ago, when McCarrick was a priest in New York:

Carefully following the process detailed by the Charter of the American bishops, this allegation was turned over to law enforcement officials, and was then thoroughly investigated by an independent forensic agency. Cardinal McCarrick was advised of the charge, and, while maintaining his innocence, fully cooperated in the investigation. The Holy See was alerted as well, and encouraged us to continue the process.

Again according to our public protocol, the results of the investigation were then given to the Archdiocesan Review Board, a seasoned group of professionals including jurists, law enforcement experts, parents, psychologists, a priest, and a religious sister.

The review board found the allegations credible and substantiated.

The Vatican Secretary of State, Cardinal Pietro Parolin, at the direction of Pope Francis, has instructed Cardinal McCarrick that he is no longer to exercise publicly his priestly ministry.

I realize this painful development will shock my many friends, family members, and people I have been honored to serve in my sixty years as a priest.

While I have absolutely no recollection of this reported abuse, and believe in my innocence, I am sorry for the pain the person who brought the charges has gone through, as well as for the scandal such charges cause our people.

According to unsealed 2006 court documents, McCarrick has been accused by seminarians and priests of being involved in homosexual activity for decades. Documentation from one legal settlement regarding "Fr. G" includes names of priests sexually involved with McCarrick, as well as firsthand accounts from seminarians regarding sexual misconduct:

According to the documents, McCarrick not only pursued this seminarian, he also referred to those under his charge as "nephews" and asked them to call him "Uncle Ted."

Another unsealed document testifies to sexual assault when McCarrick was archbishop of Newark:

The Archbishop started to kiss me and move his hands and legs around me. I remained frozen, curled up like a ball. I felt his p**** inside his underwear leaning against my buttocks as he was rubbing my legs up and down. His hands were moving up and down my chest and back, while tightening his legs around mine. I tried to scream but could not ... I was paralyzed with fear. As he continued touching me, I felt more afraid. He even tried several times to force his hands under my shorts. He tried to roll me over so that he could get on top of me, but I resisted, I felt sick and disgusted and finally was able to jump out of bed. I went into the bathroom where I vomited several times and started to cry. After twenty minutes in the bathroom, the Archbishop told me to come back to bed. Instead I went to the recliner and pretended to fall asleep.

A note sent from McCarrick four days after the incident allegedly read: "I just wanted to say thanks for coming on Friday evening. I really enjoyed our visit. You're a great kid and I know the Lord will continue to bless you. ... Your uncle has great spots to take you to!!!"

In 2004, McCarrick endured criticism from international media after it was discovered he had mischaracterized a memo sent to the U.S. bishops from then-Cdl. Joseph Ratzinger (later Pope Benedict XVI). Although the memo had made clear that Canon 915 requires clergy to deny Holy Communion to pro-abortion politicians, McCarrick misrepresented the contents as saying the opposite, insisting instead that clergy have the option — but are not required — to deny the Eucharist to public impenitents.

The misrepresentation came at a time when the bishops were debating how to apply Canon 915. A vote resulted in a majority of bishops taking McCarrick's position. Only after the vote was Ratzinger's memo leaked in the press, leading to criticism of McCarrick from Italian and American media, as well as from fellow bishops, over the deception.