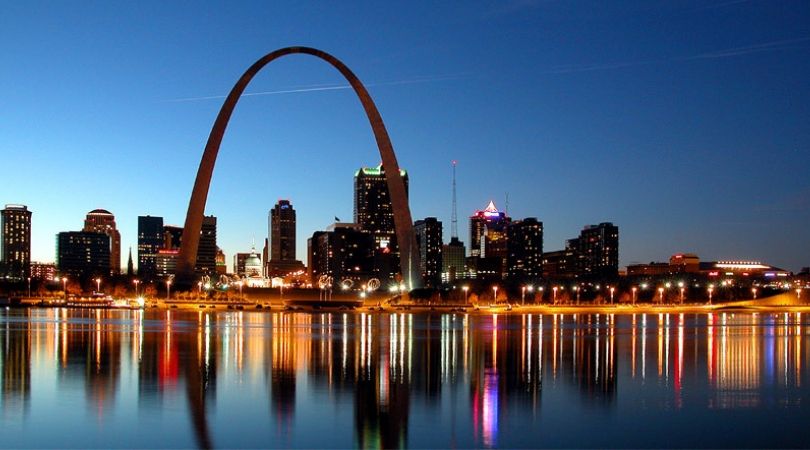 Battle for dominance between Freemasonry and Catholicism

Thanks to Hollywood, Mulholland Drive is one of the most famous and infamous streets in Los Angeles. For the discerning Catholic, the east end of Lindell Boulevard in St. Louis shares a similar reputation.

Lindell Boulevard is a four-mile thoroughfare anchored by two universities — on the west by Washington University and on the east by St. Louis University. It's the street that includes "the best mile in St. Louis" — a stretch of old money mansions facing the civilized serenity of Forest Park.

But the part of Lindell of greatest interest to Catholics is a nine-block battlefield at the far east end, a section bounded two cathedrals — the Cathedral Basilica of St. Louis and the faux St. Louis Valley Scottish Rite Cathedral.

It is remarkable for a city to have rival cathedrals, but even more remarkable to have rival cathedrals within blocks of one another. But there it is. Dedicated within a decade of one another and with one the sworn enemy of the other, the battle for dominance seems unmistakable. Was it, for example, a coincidence that the Scottish Rite Cathedral was located at the highest elevation of the city and directly across the street from St. Louis University and St. Francis Xavier College Church?

Sometime after 1906, the Masons bought their own major tract of land on Lindell. Their first project, the Shriners' Moolah Temple, was completed in 1912. On the other side of the street, St. Francis Xavier College Church was completed in 1914, the same year the Cathedral Basilica of St. Louis was dedicated. The Catholic presence on Lindell appeared to be firmly established.

But the Masons were growing stronger, and in 1921 they invited their very good friends, The Independent Order of Odd Fellows, to purchase a building on Lindell. The membership rosters for both organizations were nearly identical, according to a Masonic spokesperson. Nearly all Odd Fellows were also Masons. The Masons then built their cathedral in 1924 and followed it in 1926 with a grand New Masonic Temple almost right next door. In that same time period, a residence for the archbishop was purchased, also on Lindell.

Dedicated within a decade of one another and with one the sworn enemy of the other, the battle for dominance seems unmistakable.

So on Lindell Boulevard between 1912 and 1926, the Catholic Church built a cathedral and a church that are both on the National Register of Historic Places and purchased a residence for the archbishop. The Masons invited their other "fraternity" buddies, the Odd Fellows, to purchase property on Lindell, built a Masonic temple (also on the National Register) and a Scottish Rite cathedral, and the Shriners built a temple.

In 1962, the Masons added further fuel to the fire by renting one of their other Lindell properties to Hugh Hefner for a Playboy Club, the fourth club in the nation. The Playboy Club is long gone, and its property a foul and bedraggled eyesore.

Saint Louis University, in 1967, was one of the first Catholic institutions to change governance and be led by a lay board of trustees. Since that change, the university's ties to the Catholic Church and the Society of Jesus are mostly sentimental, allowing it to don the collar of priesthood and Catholicism (or not) when it suits them.

The players and properties have changed so dramatically over the years that it is sometimes difficult to tell who the villains are. For example, there has been talk that the Masons might donate the New Masonic Temple to St. Louis University. Is that a good thing? Who can say ...? The Moolah Temple has been cleansed of boozy Shriners to become a neighborhood movie theater and bowling alley. But the Masons' lies persist. In a conversation with a St. Louis Masonic official, he claimed a recent pope had given Catholics a free pass to become members. It's all good.

While not directly on Lindell but just a few blocks from the cathedral basilica is the neighborhood's worst nightmare, Missouri's sole provider of abortions, Planned Parenthood. In an effective counterstrike, the archdiocese of St. Louis bought a home directly across the street from Planned Parenthood. To help keep the forces of darkness in check, Abp. Robert Carlson invited the Franciscan Sisters of Christian Charity to come to St. Louis and establish a place of hospitality where people could come and pray for an end to abortion.

In a great victory on the Lindell area battlefield, Missouri legislators have joined other state legislators and just passed their own bill to limit abortions.

When you come to visit St. Louis and take your children to the Gateway Arch and the world-famous St. Louis zoo, venture a little farther east on Lindell. You won't see a swirling vortex of spirits hovering over nearby Planned Parenthood, but you may hear snickering laughter over cocktails and smell the faint whiff of cigars.