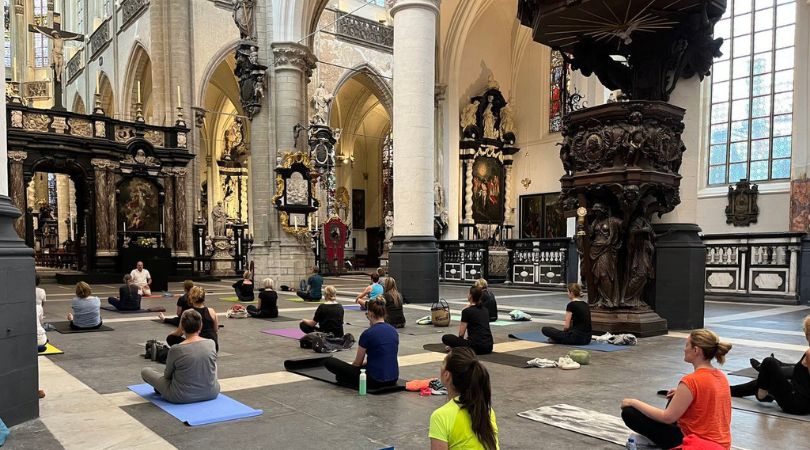 ANTWERP, Belgium (ChurchMilitant.com) - The historic church of St. James in Antwerp is now home to yoga enthusiasts chanting Hindu mantras below the main crucifix, with the altar and pews removed to cater to the new initiative.

With the approval of Fr. Bruno Aerts, the parish priest and vicar general, the organizers promote Hinduism under the guise of weekly "yoga classes," teaching participants to sing Hindu kirtans (a call-and-response style devotional song) during the sessions.

Father Aerts has posted an advertisement for the yoga classes just below his "Welcome to St. James" note on the church's website. Titled "Yoga in Church: Are You In?" — the ad touts the church as the "coolest place to be in Antwerp" for the sessions.

Saint James Church, built on the site of a hostel for pilgrims to Santiago de Compostela, is under the episcopal oversight of Bp. Johan Bonny, who challenged the recent statement from the Congregation for the Doctrine of the Faith banning blessings for same-sex unions.

"I feel ashamed for my Church," Bonny told De Standaard. He went on to call for "a respectful approach to same-sex marriage" within "the broader context of the order of service for marriage, as an eventual variation on the theme of marriage and family life."

A video produced by Dutch media outlet VRT NWS shows around 60 participants sitting in the yogic "lotus posture" and chanting the praṇava sacred syllable "Om" — Hinduism's most revered mantra. The kirtans are sung to the accompaniment of a hand-pumped harmonium.

Yoga is not an exercise but an act of worship.

"Kirtan is chanting mantras. Mantra comes from the word 'man,' which is 'human,' and 'tra' is 'to protect.' So the singing is actually protecting living beings," yoga instructor Willy van der Auwera explains in the video.

On camera, a participant praises the church setting as "traditional" and "special" and, hence, preferable to attending a yoga session in a studio or online.

Another participant says he values the sessions even more since the "church is full of religious heritage" and "yoga presents a unique opportunity to connect people with that heritage."

Father Victor Borde, a scholar in Hinduism, told Church Militant that the sessions were an "absolute profanation" of the church, and the mantras recited in the video were "chants to Hindu deities."

"With all my research, I can say that the chants or mantras are the same used during witchcraft and other occult practices," Fr. Borde, author of The Purusha Suktam: An A-Religious Inquiry Into a Sacred Text, noted.

Yoga is a fundamental part of the religion of Hinduism.

"Yoga is introduced as a form of exercise for health, but people do not realize that every posture adopted represents the movements of a Kundalini (like a snake). It takes you, sometimes, to a different realm without your control or realization," the priest explained.

The expert in Hinduism also agreed that "weak-minded people" are in danger of being possessed or afflicted by demonic spirits after immersing themselves in yoga.

A yoga enthusiast says that the initiative hopes to raise 40,000 euros for the restoration of the Peter Paul Rubens chapel in cooperation with the Royal Institute for Cultural Heritage.

The iconic Sint-Jacobskerk ("St. James Church") was home to the pious and well-educated Catholic Flemish artist Peter Paul Rubens (1577–1640), who descended from Protestants but converted to Catholicism and focused on subjects like the Eucharist, saints and martyrs — things that were criticized by the Protestant reformers.

Peter Paul Rubens is buried in St. James Church, and a masterpiece by the painter titled "The Enthroned Madonna Surrounded by Saints" (from 1630) hangs next to the marble altar. It was Rubens' last wish that the "Madonna would hang on his grave."

In 1606, the baroque artist received his crowning commission in Rome: the painting of the "Virgin and Child Adored by Angels." It hangs over the high altar of the Chiesa Nuova ("Church of Santa Maria in Vallicella") in Rome.

Saint James has joined forces with the Yoga Federation of the Netherlands to promote the venture — even though the federation clearly uses its programs to spread Hinduism among westerners.

"We are all part of our divine creator and creation itself, and when we accept that divine connection, we have entered the path of enlightenment. Yoga offers us the opportunity to experience this connection. This is self-realization," the federation website states.

"There is a multitude of yoga paths one can follow, and often they can differ profoundly both in theoretical framework and in practical practice. What they all have in common is that they lead to transcendence," the website maintains.

The chants or mantras are the same used during witchcraft and other occult practices.

Although classical yoga is identified with the work of Patanjali, the oldest Hindu scriptures, the Vedas followed by the Upanishads and the Bhagavad Gita characterize the entire development of yoga, the Yoga Federation explains.

Eminent Vatican exorcist Fr. Gabriele Amorth has denounced yoga as "evil" and "satanic," warning that "seemingly harmless oriental practices such as yoga are subtle and dangerous" and "lead to Hinduism," even if done for purposes of relaxation.

The Orthodox Church of Greece has proscribed yoga as "absolutely incompatible" with Christianity and not just a "kind of exercise" because "yoga is a fundamental part of the religion of Hinduism," Church Militant earlier reported.

"Yoga is not an exercise but an act of worship," declared Metropolitan Nektarios of Argolis of the Greek Orthodox Church in September 2019. 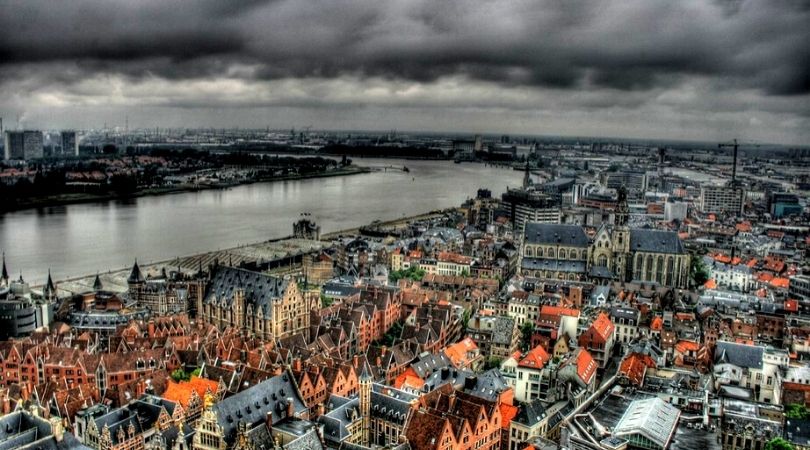 Culture of Death Advancing in Belgium
By Church Militant   •   0