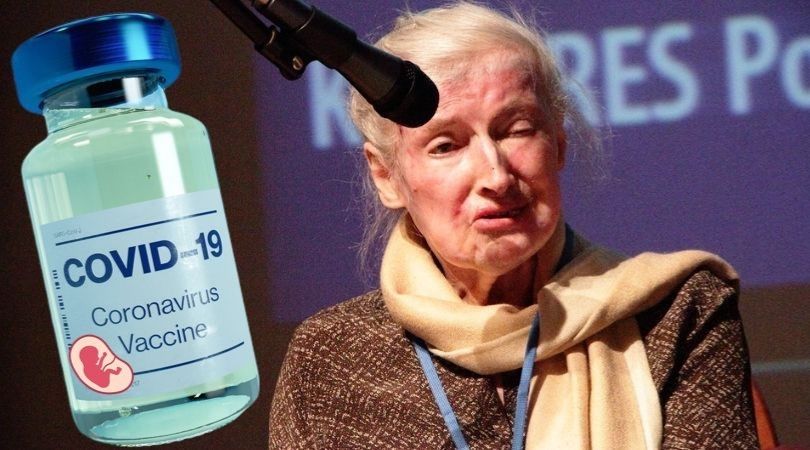 ROME (ChurchMilitant.com) - An international coalition of women doctors, religious and campaigners — now on a collision course with the Vatican — is begging Christians and people of goodwill to stop "morally justifying the use of abortion-tainted vaccines."

A leading light of the pro-life campaign is 100-year-old Polish physician Dr. Wanda Półtawska, once selected as one of the "human rabbits" for pseudo-medical experiments in the Nazi Ravensbrück concentration camp.

Holocaust survivor Półtawska, a close friend of Pope St. John Paul II, had bacteria injected in her legs by SS physicians who conducted experiments in bone grafting and tested sulfa drugs on her fellow prisoners at the camp known as "Hitler's Hell for Women."

On Monday, Półtawska and 86 women from 25 countries released a statement explaining how "general acquiescence to abortion-tainted vaccines, particularly by Christians, has only contributed to the Culture of Death."

The statement challenged pro-vaccine decrees issued by the Vatican and some bishops as "based on an incomplete assessment of the science of vaccination and immunology," pleading for a reevaluation of the pontifical and episcopal edicts.

"I will not use a vaccine that has been developed by using fetal cell lines of aborted babies," Dr. Gabriele Kuby, a distinguished German sociologist and signatory to the statement, told Church Militant.

I do not want to protect my own health by making use of the death of others.

Kuby, who converted to Catholicism in 1997, emphatically stated, "I do not want to protect my own health by making use of the death of others."

Lauded by Pope Emeritus Benedict XVI as "a brave fighter against ideologies that ultimately lead to the destruction of mankind," Kuby further expressed safety concerns regarding the experimental COVID-19 jabs.

The author of The Global Sexual Revolution: Destruction of Freedom in the Name of Freedom explained:

The vaccines have not been tested according to scientific standards; they do not create immunity; the effectiveness to ameliorate a COVID-19 infection is dubious; the side effects can be severe, even deadly; and the long-term effects are unknown. The lack of transparency and the muzzling of critical scholars by the cancel culture points to global strategies of establishing a new totalitarianism through the adoration of the false-god of health.

"We cannot sit back as the use of aborted human fetuses in medical research is gradually normalized as an 'unfortunate' part of modern-day medicine," the pro-lifers insisted, asking clergy and laity to confront "this evil offshoot of abortion."

"All these evils are only perpetuated and promoted by passive acceptance of a morally tainted vaccine on a 'temporary basis,'" the pro-lifers argued.

The statement titled "The Voice of Women in Defense of Unborn Babies and in Opposition to Abortion-Tainted Vaccines" debunked pro-vaccine clerical arguments, which claim that the use of the jab "is not only moral but is an actual act of charity to one's neighbor in light of the gravity of the pandemic."

All these evils are only perpetuated and promoted by passive acceptance of a morally tainted vaccine on a 'temporary basis.'

It also negated the moral rationalization that the vaccines use aborted fetal cells "only during testing."

Rather, the Human Embryonic Kidney-293 cells were "an integral part of the development of their mRNA candidate and [vaccine developers] used them again to confirm the efficacy of the mRNA, sometimes through more than one type of confirmatory test."

The pro-lifers also explained that the shots had "not been rigorously tested for their efficacy in preventing infection by or transmission of SARS-CoV-2, but instead [were] evaluated for the reduction of symptomatic severity in those who develop 'confirmed cases' of COVID-19."

"The average survival rate from SARS-CoV-2 infection is higher than 98.3%, and this is not likely to be significantly impacted by vaccines with such poor efficacy," the statement noted.

"The vaccine's experimental nature makes urging, coercing or forcing people to take it a direct violation of the Universal Declaration on Bioethics and Human Rights," the signatories warned.

Last month, the Vatican city-state threatened legally mandatory vaccinations, suggesting that employees could lose their jobs if they refuse to take the jab.

We can no longer offer this grain of incense to Moloch.

Vatican journalists who refused to take the vaccine on moral and safety grounds were not permitted to fly on the papal plane to Iraq.

The Vatican COVID-19 Commission and the Pontifical Academy for Life (PAL) issued a December statement claiming that "the use of such vaccines does not signify some sort of cooperation with voluntary abortion," quoting previous decrees from PAL and the Congregation for the Doctrine of the Faith.

In September, the Catholic Bishops Conference of England and Wales (CBCEW) asked Catholics to accept vaccines using fetal cell lines based on the U.K. government's assurance that "no new human fetal tissue will be used in making the vaccine."

Other bishops' conferences around the world followed suit, with bishops from the United States Conference of Catholic Bishops (USCCB) issuing conflicting statements on the issue.

In Britain, Evangelical Alliance's CEO Gavin Calver and the national director of the Fellowship of Independent Evangelical Churches (FIEC), John Stevens, are justifying and promoting the morally dubious jab, with lone pro-lifer Dave Brennan from pro-life Brephos challenging the use of abortion-tainted vaccines.

Comparing the "'fruit' of fetal tissue research" [the jabs] to child sacrifice practiced by ancient Israelites who burned their babies alive in the hands of the Canaanite idol Moloch, the pro-lifers categorically concluded: "We will not cooperate in this immense infanticidal cult. We can no longer offer this grain of incense to Moloch."