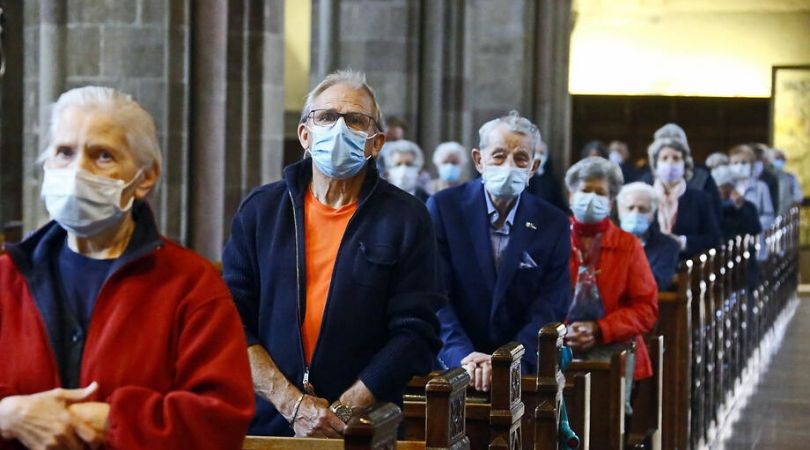 Freedom comes from God, not government

Nino Vitale, a representative for the 85th district, has been questioning the effectiveness of masks since early May. Republican governor Mike DeWine's latest mask regulations for Ohio counties with spikes in positive tests for the Wuhan virus has sparked a new round of resistance from the outspoken lawmaker.

Vitale texted on Thursday: "People exempt from this are law enforcement, people consuming food or beverages in a restaurant, anyone participating in sports, anyone exercising. But if you are going to the Holy Sacrifice of the Mask, I mean Mass, well, you better cover up citizen!"

Cuomo used the new Ohio mask regulations to ridicule Vitale. "What a dummy! Someone needs to give him [Vitale] the memo. COVID is killing us," Cuomo asserted Wednesday night.

In the handoff between Cuomo's and Lemon's shows, Lemon piled on.

Referring to people who oppose masks, Lemon said, "They should open, like, a pretzel business."

Cuomo interjected, "Cause they got it twisted."

Lemon said, "They got it twisted. Well, uh, it's religion."

Cuomo joked, "Can't wear a mask. You don't see one on Jesus."

Cuomo has himself been the object of scorn over his mask and quarantine hypocrisy.

In a segment about Cuomo from April 24, 2020, Fox News' Tucker Carlson began with a litany of video clips in which the CNN host is instructing his audience to "Stay home!" The clips were taken from broadcasts videotaped in the host's basement where he was quarantined after testing positive for the Wuhan virus.

Cuomo has himself been the object of scorn over his mask and quarantine hypocrisy.

After using the clips to establish Cuomo's on-camera moralizing, Carlson interviewed a cyclist, a neighbor of Cuomo's, who reported on an exchange he had with Cuomo on Easter Sunday evening. The cyclist ran into Cuomo at the new home the host is building on Long Island. He recognized Cuomo and confronted him about his obvious violation of the quarantine. Cuomo responded:

"I don't want some jacka**, loser, fat-tire biker being able to pull over and get in my face and in my space and talk bullsh** to me. I don't want to hear it."

Cuomo has a reputation for losing his cool. In August when a heckler called him "Fredo," a reference to the ineffective Corleone brother from The Godfather, Cuomo verbally assaulted the man and then threatened to throw him down the stairs. Three days after the run-in with the cyclist, Cuomo delivered an on-air rant about how he hated his job.

"Our faces are a representation of the image and likeness of God. Of course, that is best expressed in the human will and intellect, but the smile or frown tells us a lot about our brothers and sisters. Masks turn all of us into cotton T-shirts," he said.

Vitale also objects to the so-called science about masks. He pointed out that how most people are wearing masks bears little resemblance to how medical personnel use masks, along with an extensive scrubbing protocol to prevent the spread of disease. He said he is amused by the people who wear the same mask over and over and leave it hanging on their rearview mirror to collect bacteria and fast food debris.

The next thing coming is the vaccine.

"The government should not be mandating masks," he told Church Militant. "It is not in charge of my safety. I am."

He then warned, "The next thing coming is the vaccine."

To further demonstrate how disturbing things have become, Vitale noted, "Never in history have we quarantined the healthy."

Vitale is running unopposed in the upcoming election. He is disappointed. "I like being opposed because I get to provide a contrast. It gives me the opportunity to present ideas that can save souls," he said.

But he also confessed 80% of him doesn't want to be in politics: "There are two majorities in government. The first group believes their way is the only way. The second group has no moral values at all; they will do whatever the party tells them to do."

According to Vitale, the United States no longer has a moral center, and "that's the fundamental problem."

He explains what happens to countries without a moral compass: "You either have a mob majority or a minority with power ruling through the military or guns and often persecuting people of faith."