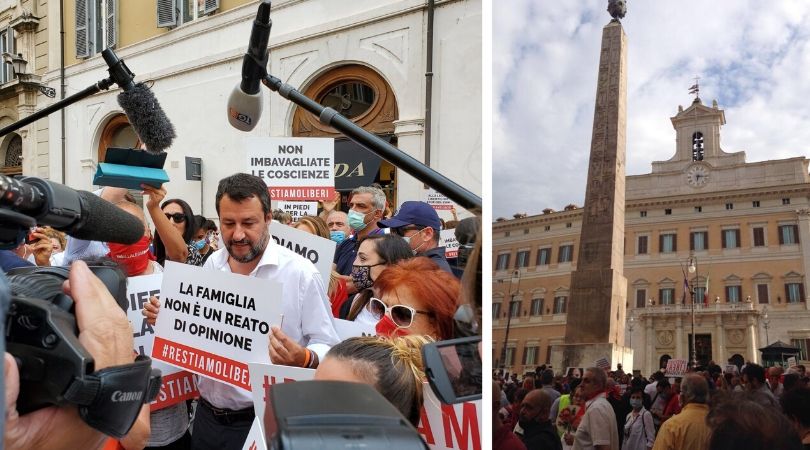 Salvini shows up, bishops stay away

ROME (ChurchMilitant.com) - Thousands of protestors across Italy are demonstrating against a draconian "homotransphobia" bill which threatens to criminalize the Catholic Church's teaching on homosexuality and transgenderism.

Prominent parliamentarians Matteo Salvini and Vito Comencini from the Lega party joined hundreds of Catholics and evangelicals in the Rome protest at Piazza Montecitorio Thursday, but the bishops were conspicuous by their absence.

"The danger of the bill getting through parliament is very serious," Comencini told Church Militant at the protest.

"The majority of the government is ideologically freighted, there is a strong LGBT lobby, and [former Prime Minister Silvio] Berlusconi's Forza Italia party had decided to yield, but we are determined to oppose the bill," he explained.

Comencini, a member of Italy's Parliamentary Commission for Foreign and Community Affairs, said that the Italian Bishops' Conference (CEI) had earlier written against the proposed bill and many bishops had spoken out against it.

Protestors tied a red gag around their mouths to symbolize the threat to free speech and held banners with the slogans: "Establishing a new crime is not needed and is wrong," "Freedom of expression for all," and "We remain free to think."

"In the midst of an unprecedented economic and social crisis, millions of starving families and businesses in difficulty, there are those in parliament who believe it is urgent to have a law on so-called homotransphobia," said Jacopo Coghe, vice president of Pro Vita and Famiglia addressing the gathering.

"For all these questions, the bill on homotransphobia has an answer. 'No,'" Coghe emphasized.

In a city brimming with clergy and religious, Church Militant spotted only three priests and four nuns at the event.

Speaking to Church Militant, Br. Manfredi Schmidt said that in normal circumstances he would "pray as much as I can and sometime more than I can."

"But now I am here to make my presence felt by protesting against the persecution that is intended by this law," said Schmidt, the only cleric to wear a cassock to the event.

Most of the people here in this square are powerless. The bishops don't want to come and be seen to support us.

"What we see happening is an inversion of the truth. This law goes against the principles of democratic Europe, Christianity, and God," Schmidt, a member of the Canons Regular of the Holy Cross said.

Valeria Alessandrini, another Lega senator present at the event, said the "absurd law would criminalize opinion and punishes those who do not share the unique thought of the Left."

Mario Caroni, a participant, told Church Militant he was disappointed with the bishops not supporting the event. "While they began by opposing the bill, now they seem to be compromising," he said.

"They have 'taken a knee' to power. Most of the people here in this square are powerless. The bishops don't want to come and be seen to support us. But they are happy to hobnob with politicians in the corridors of power," he lamented.

Juan Miguel Montes, director of Tradition, Family, Property in Rome, said he was distressed that the CEI official publication Avvenire had published an interview with Alessandro Zan, the parliamentarian promoting the bill.

The danger of the bill getting through parliament is very serious.

Montes also said the CEI website had published a number of letters from liberal Catholics who were in support of the bill. "Instead of categorically stating Church teaching, the bishops seem to be encouraging a 'debate' on it and giving the impression that such critical moral truths are up for grabs."

Another seven regions, including Alessandria, Brindisi, Catanzaro and Sassari, will hold a demonstration later this month.

A participant in the Milan demonstration told Church Militant that Catholics participating in the protest were verbally abused by a mob of LGBT activists, who kept shouting profanities and had to be kept at bay by armed police. The participant sent Church Militant video footage of similar abuse in Turin.

LGBT activists have attempted to organize "flash mobs" in a number of cities to launch counter-protests against Catholic demonstrations.

A separate demonstration was staged in another part of Rome preventing any clash between pro and anti-homotransphobia bill demonstrators.

Church Militant reported earlier on the proposed Zan-Scalfarotto law which equates homophobia and transphobia with racism by amending article 654 (sections 2 and 3) of the Italian criminal code against racial, national, religious or ethnic discrimination to include speech against homosexuality and transgenderism.