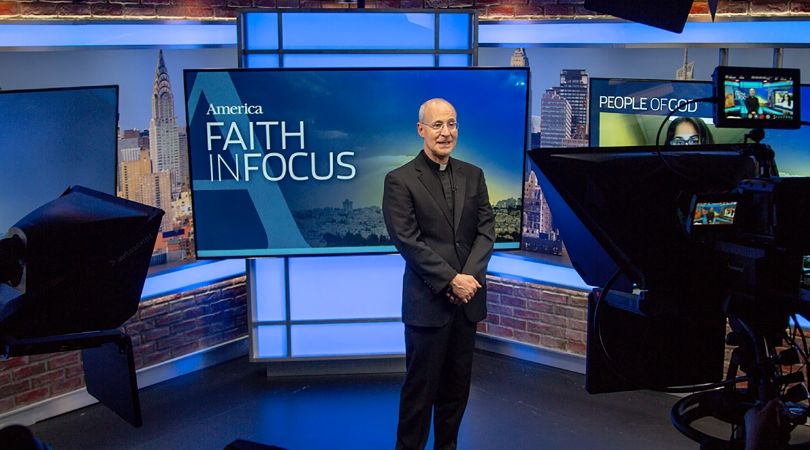 ROME (ChurchMilitant.com) - Catholics are accusing homosexualist Fr. James Martin of spouting Marcionism — the ancient heresy that the God of Jesus is not the God revealed in the Old Testament.

Explaining a passage from Luke's gospel, Martin claims that "Jesus rejects three times the idea of a monstrous God who punishes people with illness or disability."

"This is not the God of the New Testament," he categorically states, in a Twitter burst Sunday.

Martin pushes a flawed exposition of Luke 13:1-5 — the passage where Jesus is drawing attention to 18 men killed by the falling Tower of Siloam.

The Jesuit quotes Jesus' words in verse 2: "Do you think that these Galileans were worse sinners than all the other Galileans because they suffered thus?"

However, Martin omits Jesus' call to repentance in the second half of 3b: "but unless you repent you will all likewise perish."

"So don't listen to anyone, even clergy, who tell you that the #coronavirus is a punishment for sins — either your sins, the sins of some group (usually a group they oppose) or the world's sins. Jesus rejects this approach outright in today's Gospel and again in Luke 13:2-5," Martin insists.

In a Sunday opinion piece for the leftwing New York Times, Martin asks: "Where is God in a pandemic?" He replies, "The honest answer is: We don't know. But even non-Christians may find understanding in the life of Jesus."

The pro-gay, activist-priest goes on to attack traditionalist Cdl. Raymond Burke's recent letter, which challenges Catholics to reflect upon the Wuhan virus crisis in the light of society's rebellion against God and "even within the Church, a paganism which worships nature and the earth."

Cardinal Burke states: "There is no question that great evils like pestilence are an effect of original sin and of our actual sins."

Martin responds by citing Jesus' words from John's Gospel: "Who sinned, this man or his parents, that he was born blind. Neither he or his parents sinned."

However, again Martin omits the second part of the verse from John 9:3 where Jesus answers, "It was not that this man sinned, or his parents, but that the works of God might be made manifest in him."

"A text out of context is pretext and can be used to justify anything," a Rome-based biblical scholar told Church Militant. "The Lukan text is a favorite of many liberals — they misquote it to justify their belief in a fairytale God who does not punish sin."

"Any academic commentary on Luke's Gospel will tell you Jesus is not negating the Old Testament link between sin and punishment. As in the book of Job, Jesus is reminding his disciples that one mustn't leap to the conclusion that all people suffer in direct proportion to their degree of sin," the scholar observes.

Jesus is not rejecting God's justice which results in punishment. Jesus is affirming God's grace, which gives all of us who are sinners an opportunity to repent. We should be hastening to repent before a tower fall on us or the coronavirus infects us, lest we will die without being in a state of grace.

"In fact, the New Testament speaks about Hell as eternal punishment, a fate far worse than temporal punishment like the Wuhan virus. And Fr. Martin should be warning people that unless we repent we are all in danger of hellfire," the scholar adds.

New Testament scholar Timothy Luke Johnson confirms this interpretation in his Sacra Pagina commentary: "Jesus does not dispute the equation [between sin and punishment] but simply questions whether they [the people who perished] were more egregious sinners than others."

Jesus' point is that "death itself, with the judgment of God, is always so close. And when it happens so suddenly, there is no time to repent," Prof. Johnson writes.

"Jesus' reply does not deny sin its consequences, not that sin leads to judgment ... The progression of his [Jesus'] argument, then, is that judgment will overtake people, whether Galilean or Jerusalemite or of some other origin, unless they repent," writes Professor Joel Green in his New International Commentary on the New Testament series on Luke.

Meanwhile, alert Catholics called out Martin for his Marcionism. "So are you a Marcionite now too, Father?" Eamon O'Brien asked. "The God in the Old Testament is the same God in the New Testament. There aren't two separate Gods. That is straight up heresy," Abby Johnson replied.

"Fortunately, scores of Catholics are able to recognize Fr. Martin playing the 'wrathful' God of the Old Testament against the 'loving' God of the New Testament as the anti-Semitic heresy of Marcionism — a heresy which in its full-blown stage would lead to the Holocaust," the Rome-based biblical scholar told Church Militant.

"Father James Martin's exegesis is not just heresy, it's plain humbug," he notes, "as in numerous instances the Old Testament portrays God as merciful, compassionate, slow to anger and loving beyond description, while the Gospels so frequently depict a Jesus using apocalyptic language to threaten and prophesy the most dreadful judgments and calamities."

According to the Church father Tertullian, Marcion claimed that the God of the New Testament is "a better god, who is neither offended, nor does he get angry, nor does he take vengeance."

On Wednesday morning Martin continued his attacks on Cdl. Burke.

"Bigotry, scapegoating and sheer stupidity increase in times of crisis. But it's tragic when those things come from church leaders. LGBT people did not cause the coronavirus. Nor is it God's punishment because of anyone's sins. The only sin here is hatred," he wrote, retweeting an article from pro-LGBT New Ways Ministry on Cdl. Burke’s letter.

In Marcion's evaluation of the Old Testament, there lurks a constant overtone of anti-Semitism.

Theologians have referred to Marcion as the first anti-Semite. "In excluding the Jewish God and the value of Jewish history, Marcion opened the door to anti-Semitism," writes Gerald O'Collins and Mario Farrugia in Catholicism: The Story of Catholic Christianity.

"In Marcion's evaluation of the Old Testament, there lurks a constant overtone of anti-Semitism," writes historian Henry Chadwick in The Early Church.

The second-century Marcion argued that Christianity had completely superseded Judaism and the Christian canon should not contain the Old Testament. Marcion's heresy forced the Church to take a stand and decide that the Old Testament would be part of its canon.

The Church of Rome excommunicated Marcion in A.D. 144 and church fathers like Justin Martyr, Irenaeus and Tertullian denounced him as a heretic.