Parishioners of Resurrection Parish in Chicago, Illinois, held a rainbow flag-burning event in mid-September, cutting up and setting on fire an LGBT flag that once hung in the sanctuary at the parish's first Mass. The event was originally scheduled for Sept. 29, the Feast of St. Michael and the Archangels, but the Chicago archdiocese — heeding complaints by gay activists — called the pastor, Fr. Paul John Kalchik, and ordered him not to hold the event. A handful of parishioners took things into their own hands and decided they would burn the flag themselves.

In this homily given Sept. 16, Fr. Kalchik explains why the parish burned the LGBT flag.

As events have unfolded over the last month, we find the Church engulfed in a great battle. Many cardinals, bishops and even the Pope seem to be living double lives. They, at times, speak eloquently about the Faith and present themselves as men striving for holiness. But then the records show they are either living very sinful lives or have covered up for others who do so, leaving them to prey on more victims.

And also, when asked to speak about the abuse, they play it down; they are more concerned with global warming, migrant issues and fake homophobia than their real mission of saving souls. Thusly, many of the faithful have found themselves shaken, deeply disturbed, because the institutional Church has been revealed to be a sham. The Church is at war, but this war is anything but civil.

A week ago, I was threatened with removal of my faculties to serve as a priest by those in charge at the archdiocese. They told me in no uncertain terms that we could not burn a rainbow banner as it would be offensive to the gay community.

A week ago, I was threatened with removal of my faculties to serve as a priest by those in charge at the archdiocese.

This does not scare me. Over the course of my life, I have been to Hell and back a couple times over. I recognize what is evil and have vowed to God to take steps to thwart that evil. God grants authority, and I follow my conscience, formed by His law. The gay banner superimposed over Our Lord's Cross, a symbol of Our Lord's Passion, had to go.

Instead of a public display, which had every chance of turning violent, based on many hate-filled profane phone calls, the banner was burned privately, with a small group of our regular adorers of the Blessed Sacrament assisting in cutting it to pieces. Then, a prayer of exorcism was said over this diabolic thing, and it was burnt in a blessed fire and reduced to ash.

Please re-read for yourself today the full story of the Fall of Man as described in the Book of Genesis, chapter three. And please, please take note of how the serpent operates. He is a liar, but he is not a blatant liar. Look closely at how he slightly twists the truth, ever so slightly, ever so deviously. Listen and hear Satan's tender words of response to Eve's inquiries: "You certainly will not die! No, God knows well that the moment you eat of it your eyes will be opened and you will be like gods who know what is good and what is bad."

And as we all know, Adam and Eve eat of the tree and their eyes were opened, and they came to know what was good and bad, and as a result of their disobedience to Almighty God, they died and all their progeny after them. The devil has been and is one subtle liar; he twists the truth ever so slightly to make the bad seem good, to get people to succumb to temptation and sin, to their detriment and to their damnation.

Homosexual acts, sex outside of marriage, abortion, contraception, euthanasia are all great evils, which the devil has persuaded many people to accept as OK over the last 50 years, by an entire series of lies, all subtle, all little, all devious and all evil. In regard to abortion, this one lie is still ringing in my ears from three weeks ago, from an anti-Kavanaugh protest here in Chicago in Federal Plaza.

These pro-abortion, anti-Kavanaugh protesters shouted in addition to their vulgarities: "A baby is not a baby till it's born!"

What rot and what a lie. As St. John Paul II said, "Human life is sacred from conception through natural death." As a man who was born at barely three pounds and a full month premature, this misconception for me is easy to spot and to know its author is the devil.

The homosexual thing is a different matter.

Let's start with how the rainbow itself, a sign of God's promised protection for his faithful. It has been usurped to promote homosexual sex as sanctioned by Almighty God. Scripture is absolutely clear on this matter: "A man lying with a man is an abomination, and gravely sinful." Homosexual activity is described as sinful in the Old Testament, and this is also crystal clear in the New Testament. In the Old Testament, Sodom, from which we get the word for male-on-male sex, sodomy, is destroyed. The homoheretics, however, will tell you their sin was a "lack of hospitality."

In the New Testament, please check out St. Paul's first letter to the Corinthians (6:1–11). Saint Paul, perhaps the world's most eloquent writer, leaves no room for misinterpretation. "Do you not know that the unjust will not inherit the Kingdom of God? Do not be deceived: neither fornicators, nor idolaters, nor adulterers, nor boy prostitutes, nor sodomites, nor thieves ... will inherit the Kingdom of God." How does a shepherd of the Church ignore that teaching?

So Scripture is crystal clear, and our Tradition is crystal clear — so what is the problem with this teaching today? Why have so many jettisoned all reason and come to accept the gay agenda? "Oh yeah, those two are a gay couple; they are married. Their marriage is no different from anyone else's. Why shouldn't they be able to adopt children? Love is love."

Come on, wake up and smell the coffee. Wake up! Over the last 50 years, the devil has been working ever so quietly, ever so subtly spreading little lies, so much so that today the culture has come to accept this very unnatural behavior lock, stock and barrel. A lot of people have come to accept a lot of rot as truth as compared to what Sacred Scripture and Sacred Tradition tell us.

Let's get back for a moment to Resurrection Parish's gay cross banner, which hung proudly, covering the real crucifix on our reredos at the Mass of Consecration. Simply stated, it was an instrument of propaganda to promote in a sly way the acceptance of sodomy as OK, in direct opposition to the Catechism of the Catholic Church. Long story short, that is why this sacrilegious work of art was burned.

People who, for whatever reason, have developed a same-sex attraction have a heavy cross to bear, but they need to hear the truth and accept living a chaste lifestyle.

Sodomy is not OK — it is sinful and it is evil. People who, for whatever reason, have developed a same-sex attraction have a heavy cross to bear, but they need to hear the truth and accept living a chaste lifestyle.

A second subtle lie much published by the gay lobby is that the Church is "homophobic," and that "homophobia" is the real sin, and God forbid a straight person hurt the feelings of a homosexual.

"You know they are all God's Children." True, they are God's children, as is everyone on the planet. Love the sinner, hate the sin applies here. I have never once known of a credible case of someone attacking a person physically or verbally in church because they had a same-sex attraction, whereas I know hundreds of cases of homosexual predators preying on people — myself included. So please, please, put all the subtle lies out of your head, ignore all the devil's propaganda, like our gay banner was, and get down to work and pray.

Our first defense in this war against the devil is prayer. Say your Rosaries, say your Hail Marys, Our Fathers, read Sacred Scripture and pray, pray as earnestly as you can and as sincerely as you can. And as St. Peter said in his first letter, be vigilant and remember the devil is a lion prowling waiting to devour, and he will devour you if you let your guard down.

Just think of it: If all of us, the faithful remnant, make a good confession in this next week and receive Our Lord in the Blessed Sacrament, think of how powerful our prayers will be in purifying our Church around and healing the wounds made to the Body of Christ. Let's make our personal purity our number one priority, and after all of our hearts are remade, we can work on restructuring our Church and restoring right leadership. 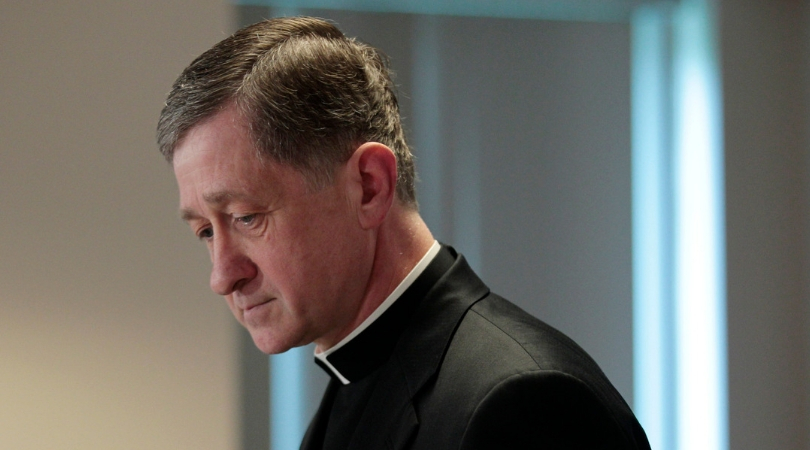