Grand Imam Al-Tayyeb said apostates from Islam should be killed

"The Pope? How many divisions has he got?" Stalin supposedly asked Churchill in the waning days of World War II. "The Pope? How many Arabic translators has he got?" Al-Tayyeb, grand imam of Al-Azhar University, presumably asked his advisors before signing the document "Human Fraternity for World Peace and Living Together" in the United Arab Emirates earlier this month with Pope Francis.

The grand imam speaks the truth, the whole truth and nothing but the truth in Arabic. This is his in-house discourse. He is an open scroll to Sunni Muslims, who comprise 85–90 percent of the world's Islamic population. On the other hand, Grand Sheikh Al-Tayyeb speaks in carefully crafted cant to Western leaders. This is his public relations glossolalia.

"You are a sign of hope for our world," gushed Welby like the Trevi Fountain. The alt-media dug up Al-Tayyeb's Arabic orations denouncing homosexuality as a disease and exposed Welby as a Western sucker who fell for the grand imam's weasel words.

Tonight, the Grand Imam of Al-Azhar and I shared our gratitude and admiration for the Christian and Muslim #EmergingPeacemakers who have been with us at @LambethPalace this week. You are a sign of hope for our world. #EPForum18 pic.twitter.com/NgooMHEctx

Now, Al-Tayyeb has adroitly twisted the pontifical mitre into a dunce cap.

Doesn't Pope Francis know that Islam rubber-stamps peace treaties with infidels only if it is advantageous for Muslims? When Muhammad signed the Treaty of Hudaybiyyah with the Meccans in 628, he used it as a Trojan Horse, furthering his ultimate objective of capturing Mecca.

Islamic jurists define a treaty as a form of ‘aqd (literally, a tie) which has legal consequences. According to the Royal Aal Al-Bayt Institute for Islamic Thought: "Muslims can make treaties with their enemies, even if they are polytheists, and they are expected by God to keep to their treaties," provided non-Muslims maintain the treaty.

But "Human Fraternity for World Peace and Living Together" is neither a treaty nor a convention. It is a declaration. Theologically and legally, such a declaration is not legally binding. Strategically, though, it is a masterstroke for Islamic mission (dawa). Muslims will use the document to intensify dawa in the West, but will extend no such reciprocity to Christians.

The declaration is a tour de force of Islamic taqqiya. Al-Tayyeb gently leads Pope Francis down the Alice in Wonderland rabbit hole where "a word means just what I choose it to mean." Christians "should be aware that things are not always what they first seem on the surface" when dialoguing with Muslims, cautions Robert Reilly in The Prospects and Perils of Catholic-Muslim Dialogue. "A Muslim can see the same word and understand it differently," he notes.

Indeed, the very first sentence of the Al-Tayyeb-Francis document demonstrates this attempt at dissimulation: "Faith leads a believer to see in the other a brother or sister to be supported and loved." This is a particularly Christian reflection, based on the Genesis notion of humans created in God's image and likeness. In the Quran, humans are not made in God's image or likeness. The very idea of the "image of God" in humanity is a blasphemous one in Islamic revelation.

Not surprisingly, Islam trumps Christianity in the document by calling the believer to support the "other" not on the basis of humans created in the imago Dei but based on the Islamic doctrine of humans as "equal on account of his (Allah's) mercy" — which is insidiously inserted into the text in parenthesis.

But Allah has mercy only on those who submit to him by becoming Muslims! Further, Muhammad alone is the embodiment of Allah's mercies (21:107). The Quran emphatically teaches that those refusing to submit to Allah are not equal to Muslims. Rather, Muslims are "the best people that hath been raised up for mankind" (3:110), while non-Muslims are "as the cattle" (7:179) and "unclean" (9:28).

The next sentence in the document calls "believers to express this human fraternity" through "faith in God." But the God of Islam, defined by tawhid (the unity of God), categorically repudiates the Trinity and the deity of Jesus. Even though Nostra Aetate states that the Muslims "adore the one God," it does not say that it is the same God.

The document talks about "We, who believe in God." It is clear from the following words that this God is not Yahweh, but Allah who will judge humanity "in the final meeting with Him and His judgment." And, pray, who is a believer in God? True believers are only those who believe in Allah and his Messenger (24:62, 49:15). If one doesn't believe in Muhammad, then he is a kaafir!

Does Pope Francis not understand that the Quran forbids Muslims from 'fraternal' (in the sense of brotherly) relationships with non-Muslims?

When Pope Francis and Al-Tayyeb speak of "fraternity," do they both understand it to mean "brotherly" from the Latin root frater, i.e. brother? Does Pope Francis not understand that the Quran forbids Muslims from "fraternal" (in the sense of brotherly) relationships with non-Muslims?

Muslims are permitted three types of relationships with non-believers. First, Shariah allows Muslims to have dealings like entering into purchase and sale transactions, hiring, etc. with non-Muslims (Mu'aamalaat). Second, Muslims may feel the pain of others and sympathize with them (Muwaasaat). However, in the third type of relationship, a Muslim is not permitted to enter into a "close bosom" or brotherly friendship (Muwalaat) with a non-Muslim as he may compromise his Islamic faith (5:51).

Al-Tayyeb's sophistry peaks when the document adapts the following verse from the Quran (without referencing it): "In the name of innocent human life that God has forbidden to kill, affirming that whoever kills a person is like one who kills the whole of humanity, and that whoever saves a person is like one who saves the whole of humanity." Muslim apologists often cite this text when touting Islam as a religion of peace.

However, this is a partial, out of context and highly misleading paraphrase of Sura 5:32, which, read in its entirety, actually permits violence "for murder or for spreading mischief in the land." In fact, the next two verses explain how Muslims should apply the principle, particularly regarding those who cause "mischief."

"The punishment of those who wage war against Allah and His Messenger, and strive with might and main for mischief through the land is: execution, or crucifixion, or the cutting off of hands and feet from opposite sides, or exile from the land" and Hell in the hereafter unless they repent (Sura 5:33–34). The grand imam knows that physical jihad against kaafirs is not an option but an obligation (fard kafaayah) on the Islamic community as a whole.

If the Vatican doesn't have an Arabic translator, Pope Francis could at least have learned about Al-Tayyeb's double-speak on YouTube. While the document talks about reinforcing "the bond of fundamental human rights" for "all the men and women of East and West" and "avoiding the politics of double standards," the grand imam is telling his in-house Arabic audience the opposite.

"We should be aware that the concept of human rights are full of ticking time-bombs," Al-Tayyeb said in an interview on Arabic television.

While the grand sheikh co-signs a document with the Pope calling for 'freedom of belief,' he is telling his Arabic audience that 'apostasy is a crime' and insisting that 'the apostate must either renounce his apostasy or else be killed.'

While the grand sheikh co-signs a document with the Pope calling for "freedom of belief," he is telling his Arabic audience that "apostasy is a crime" and insisting that "the apostate must either renounce his apostasy or else be killed."

In July 2016, the Cairo Institute for Human Rights (CIHR) issued a statement asking Al-Tayyeb to "back down from his statements against the freedom of belief, which provide support for violent extremism."

In March 2016 before the German parliament, Sheikh Al-Tayyeb made unequivocally clear that religious freedom is guaranteed by the Koran, while in Cairo he makes the exact opposite claims. ... Combating terrorism and radical religious ideologies will not be accomplished by directing at the West and its international institutions religious dialogues that are open, support international peace and respect freedoms and rights, while internally promoting ideas that contribute to the dissemination of violent extremism through the media and educational curricula of Al Azhar and the mosques.

"Is the Pope Catholic?" doesn't sound like a rhetorical question anymore. 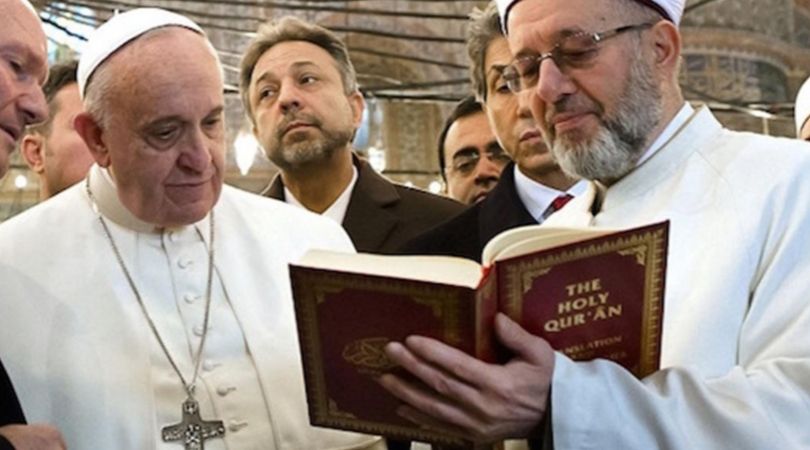 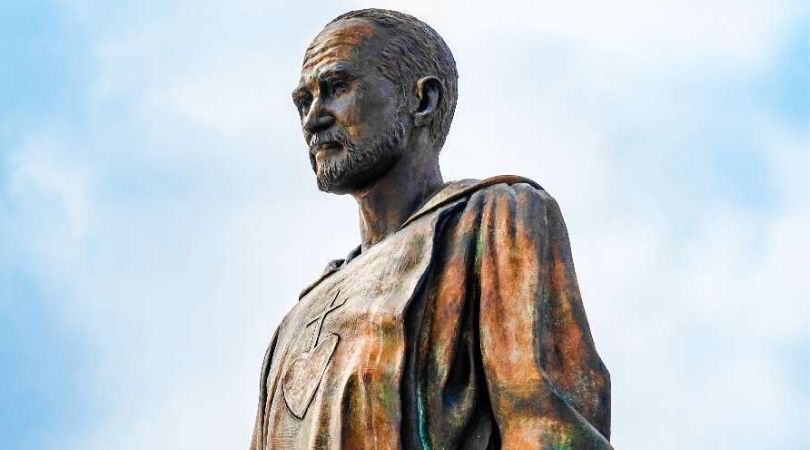