SAN FRANCISCO (ChurchMilitant.com) - Tens of thousands of pro-lifers took to the streets to protest abortion and witness to the sanctity of human life in California months before the U.S. Supreme Court is expected to hear a First Amendment case involving California pro-life pregnancy centers.

On Saturday, the 14th annual Walk for Life West Coast was held in San Francisco, which included pro-life testimonies, an "Info Fair," a rally and a walk through downtown. The event started at 10:45 a.m. at the city's Civic Center and ended with a walk up San Francisco's Market Street for about two miles to Justin Herman Plaza on the Embarcadero, along San Francisco Bay, at 1:30 p.m.

"Our goal is to raise awareness for the pro-life cause and have people turn out to show their support," explained Eva Muntean, a founder and organizer of the walk. "While it's hard to measure the impact we've had over the past 14 years, we have had people tell us that they've come over to our side as a result of the walk."

On March 20, the Alliance Defending Freedom attorneys will defend a case arguing in favor of the "aim of pro life pregnancy centers in California to provide women with love, support, care, and hope, along with the physical resources they may need to follow through with their pregnancy and choose life."

Alliance Defending Freedom lawyers are defending the National Institute of Family and Life Advocates (NIFLA), as well as its associated pregnancy centers in California, in NIFLA v. Becerra. The case is a First Amendment challenge to a California law, the Reproductive Freedom, Accountability, Comprehensive Care and Transparency (FACT) Act passed in 2015, that "requires crisis pregnancy centers — which oppose abortion — to disclose specific kinds of information (either notices regarding the availability of low-cost abortions or disclaimers stating that they do not provide medical help, depending on the type of services that the centers offer) to the pregnant women who seek their assistance."

Participants gather each year across the country at both the national March for Life in Washington D.C. and smaller events, including the Walk for Life, to protest the U.S. Supreme Court decision, Roe v. Wade, which legalized abortion in 1973. Organizers estimated that 50,000 people walked on Saturday. Walk for Life West Coast confirmed with Church Militant that it was the largest gathering in recent years.

The event included priests, seminarians and religious, as well as parish and Catholic school groups that all consider themselves part of "the pro-life generation," noted Muntean. "Walkers are typically 90 percent Catholic. It's the Catholic Church that has always led the pro-life fight."

Pro-lifers carried signs, including, "I march for the unborn" and "defund Planned Parenthood." Counter-protesters were present at the walk, including the San Francisco Democratic Socialists of America, but there was no violence. Marchers were told to conduct a "peaceful and prayerful attitude" and not carry signs with graphic abortion images. In addition, the San Francisco Board of Supervisors approved resolutions that banned signs along Market Street with the message "Abortion Hurts Women."

The rally leading up to the walk included speakers like Terry Beatley, founder of the Hosea Initiative, a nonprofit that continues the mission of Dr. Bernard Nathanson, a former abortionist and co-founder of NARAL, a pro-abortion organization. Nathanson later converted to Catholicism and became a pro-life advocate.

Beatley returned to the Catholic faith after accepting the teachings on abortion and birth control in Pope Blessed Paul VI's 1968 encyclical, Humanae Vitae, and is working on a movie about Nathanson's life. He wrote a book, What If We've Been Wrong, about the former abortionist's efforts to legalize abortion.

Others speakers included Dr. John Bruchalski, a past abortionist who reverted to his Catholic faith and currently runs Tepeyac Family Center, a pro-life medical practice that respects "the dignity of every life and strive[s] to provide excellent care to all, including those in need."

"I want all the young people here … as a doctor who knows that abortion hurts women — we need you. We need you to enter and return medicine back to the prolife movement. That's a practical way you can make a difference," remarked Bruchalski to those gathered at the rally. Abortion hurts not only women and kills babies but "abortion also hurts the providers who provide that service."

The walk also awarded the founder of Pro-Life Action League, 90-year-old pro-life advocate, Joseph Scheidler, with its "St. Gianna Molla Award," named for the Italian doctor, wife and mother who risked her life for her unborn child. Scheidler founded his organization in 1980 with the goal of "saving unborn children through non-violent direct action."

It's the Catholic Church that has always led the pro-life fight.

Coming a week after President Donald Trump became the first sitting U.S. president to give a live address from the Rose Garden to over half a million March for Life participants on January 19, the walk also included a Latin Mass in the Extraordinary Form at 5 p.m. at the National Shrine of St. Frances of Assisi in San Francisco. Star of the Sea church hosted a Holy Hour to conclude the walk. 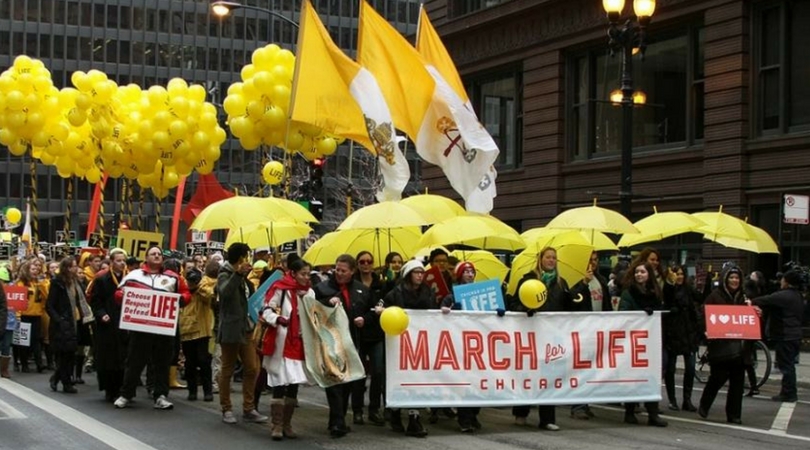