NEW YORK (ChurchMilitant.com) - The ongoing scandal in New York deepens. Monsignor Greg Mustaciuolo, vicar general of the New York archdiocese — implicated in the gay-for-pay sex and embezzlement scandal involving Fr. Peter Miqueli, and also connected to the promotion of a homosexual priest once arrested in a gay sex sting to the prestigious position of head of archdiocesan TV — is now being revealed as an intimate associate of Msgr. Michael F. Hull, the priest who went missing in action in 2014 after having served the archdiocese as highly esteemed professor of Sacred Scripture at St. Joseph's Seminary for nearly 20 years, and as executive director of the controversial Sheen Center for Thought and Culture. Now Hull lives halfway across the world as an Episcopal minister in Scotland with a wife and child.

Reports first surfaced in spring of 2014 that Hull had vanished from the New York archdiocese, leaving no indication of his whereabouts. The chancery was tightlipped about his disappearance, such that one priest who spoke with ChurchMilitant.com deemed the silence "very strange."

But Hull had left in his wake questions of embezzlement of parish money to finance a costly renovation of his rectory, as well as rumors of stealing donations from the Sheen Center.

He also left behind a history of alleged sexual involvement with Msgr. Mustaciuolo, the man who reportedly secured for Hull three full-time paid positions, netting for him a considerable annual pay.

It was during Easter break of 2014, only weeks before the end of the academic year and a month shy of ordination of new priests, that Hull quietly donated many of his books from his personal collection to the seminary library, even giving away his vestments to seminarians. He left a note on the bulletin board advising students how to complete the semester in his absence — and then boarded a plane to Europe with a young woman named Eleonora who would later become his wife.

Mustaciuolo, with whom he had reportedly shared a longtime intimate relationship, was so heartbroken he refused to see him off at the airport.

Word of Hull's disappearance spread throughout the archdiocese at lightning speed, but clergy were largely kept in the dark about the circumstances.

"Once the darling of Cardinal Egan," writer Maureen Mullarkey commented, "Hull was sheltered behind institutional silence." Neither Cdl. Timothy Dolan nor Vicar for Clergy Bp. Gerald Walsh addressed the matter to priests in a timely fashion, and the archdiocese made no mention of Hull in its publications. 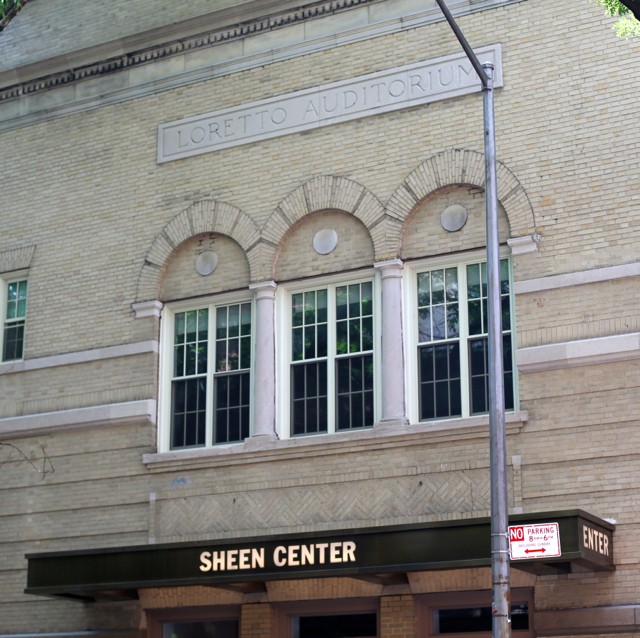 In addition to being a senior faculty member at the time — a highly prestigious position, especially at St. Joseph's Seminary (known as "Dunwoodie" to seminarians) — Hull was also made pastor of Church of the Guardian Angel in Chelsea, as well as director of the Sheen Center. The three jobs mirrored three full-time positions of his friend Mustaciuolo, who serves as Vicar General, Chancellor and Moderator of the Curia.

The late Cdl. Edward Egan, former head of the archdiocese, considered Mustaciuolo and Hull "sons," and the archdiocese treated them well, sending Hull off to Rome shortly after ordination to obtain a doctorate in sacred theology, and even giving him extra time to complete his final dissertation back at Dunwoodie.

Hull was very much considered Mustaciuolo's "alter ego," their names spoken in the same breath in the archdiocese. Many priests knew of their close relationship, as they often appeared together in public. According to an archdiocesan source who spoke with ChurchMilitant.com, a journalist at a top-ranking news agency witnessed Mustaciuolo and Hull on his plane flight "playing with each other." The two were also known to appear at the chancery together wearing matching sweaters.

Hull was reportedly unhappy at Dunwoodie, and Mustaciuolo is said to have secured him an additional appointment at Church of the Guardian Angel. It was shortly after his placement there that Hull took on an expensive renovation of his rectory, the source of funding which remains mysterious. During the renovation, Mustaciuolo reportedly allowed Hull to rent out an apartment rather than having him live, as is customary, in a neighboring rectory.

It was around this time that Mustaciuolo is also said to have secured a third full-time position for Hull — as director of the Sheen Center, a performing arts complex in Lower Manhattan that cost around $20 million to convert from a homeless shelter run by Catholic Charities.

Named executive director in 2011, Hull had described the Center's purpose as "a place to showcase Christian humanism — the true, the good and the beautiful." Elsewhere, he had said it "strives to be a place where dynamic dialogue between artists and audiences can flourish."

Privately, he allegedly joked with colleagues that he didn't even know what "off Broadway" meant, and his resumé lacked any credentials to justify his new position.

In spite of widespread claims that Hull had embezzled donations from the Sheen Center and from his own parish to fund the rectory renovations, the archdiocese did not conduct an audit of Guardian Angel after Hull's disappearance — an omission still noticed by New York clergy, who believe financial misdealings would be exposed if such an audit were ever done.

After Hull's disappearance, he surfaced in the news months later as Director of Studies in the Scottish Episcopal Institute (SEI) — married and with a baby.

During the announcement of his appointment to SEI, Hull commented, "I am delighted for the opportunity to serve as the Director of Studies! The optimism of the Scottish Episcopal Church in its missional orientation is palpable."

His work now involves training men and women for ministry in the Scottish Episcopal Church.

Hull himself would be commissioned into the Scottish Episcopal Church in June of 2015, now serving as assistant priest at St. Vincent's Chapel in the Episcopal diocese of Edinburgh. On his professional page, he lists as his causes "Arts and Culture," "Education," "Human Rights" and "Poverty Alleviation."

Mullarkey has remarked on "the chutzpah of a man who apparently feels no need to keep his head down after embarrassing the Church he was committed to serving."

Journalist Matt Abbott reported on the comments of a priest-friend in the New York archdiocese at the time. "I heard about Michael Hull's laicization from several of his fellow priests in the archdiocese — all trustworthy and faithful men. There was tremendous anger and disappointment from these priests in the way it was handled, especially given the archdiocese's unjust treatment of Fr. Justin Wylie at around the same time."

Father Wylie had been a visiting priest from the diocese of Johannesburg, South Africa working in New York as negotiator at the Permanent Observer Mission of the Holy See to the United Nations. During his time in the city he ministered to the faithful, offering the Traditional Latin Mass regularly at various parishes.

In a homily delivered May 25, 2014 at Holy Innocents Church, he pleaded with Cdl. Timothy Dolan to ensure a permanent home for the traditional community, after the cardinal had announced Holy Innocents — the only parish in the city to offer the Traditional Latin Mass daily — would be closed and merged with a liberal, pro-homosexual parish.

Within weeks, Wylie was stripped of his faculties, fired from his position at the UN, and sent packing to Johannesburg.

Hull is among the growing ranks of questionable New York clergy intimately tied to Msgr. Mustaciuolo, who, in spite of exposure in a recent string of scandals, continues to occupy a powerful position in the archdiocese.

Neither Msgr. Mustaciulo nor Msgr. Hull have responded to requests for comment.