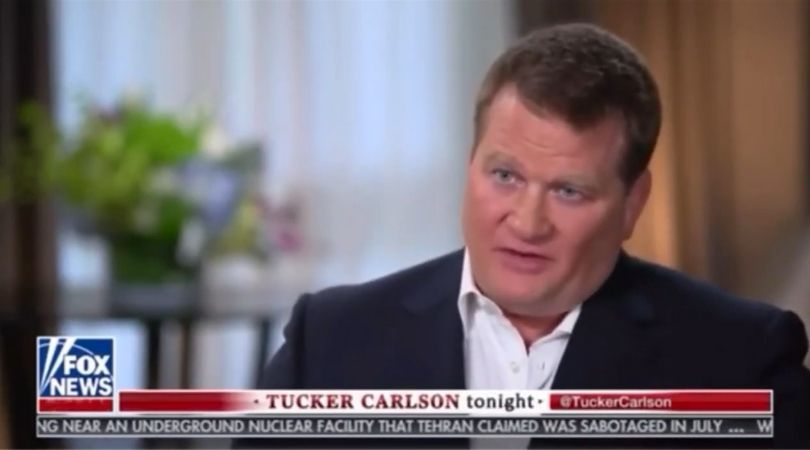 WASHINGTON (ChurchMilitant.com) - A businessman-turned-whistleblower is accusing Joe Biden of lying when he denies he ever discussed business with his son Hunter, offering evidence that the Democratic presidential contender not only involved himself in Hunter's business deals but profited handsomely off them.

"The former vice president has said he had no knowledge whatsoever of his son's business dealings and was not involved in them at all," said Fox News host Tucker Carlson during an hour-long interview Tuesday with Tony Bobulinski, former business associate of Hunter Biden.

Bobulinski says he twice met privately with the vice president specifically in relation to a contract with a major Chinese energy firm — and not only that: He has emails proving China loaned the Biden family $5 million as part of the deal, in addition to the $10 million annually Hunter received.

Bobulinski was CEO of Sinohawk Holdings, which in 2017 entered into an agreement with CEFC China Energy, a multi-billion-dollar energy conglomerate backed by the Communist Chinese government.

An email shows Hunter entered into a three-year contract with CEFC that involved receiving $10 million per year for "introductions alone."

(Robert) Hunter Biden writes that "this proposal by the chairman was so much more interesting to me and my family," making clear it would not benefit Hunter alone but also the Biden family.

Speaking to Joe Biden's denials at the last presidential debate over his involvement with Hunter's business affairs, Bobulinski said, "I'll be honest with you, I almost stood up and screamed, 'Liar!' and walked out, because I was shocked that after four days or five days that they prepped for this, that the Biden family is taking that position to the world."

I almost stood up and screamed, 'Liar!' and walked out.

Bobulinski's name first appeared in a smoking-gun email dated May 13, 2017, leaked from Hunter's laptop — a story the New York Post broke on Oct. 15. The email from business associate James Gilliar shows "remuneration packages" for six individuals as a part of their deal with CEFC.


Half the individuals are from the Biden family: Hunter Biden, Jim Biden (Joe Biden's brother) and Joe Biden himself, whom Bobulinski confirmed is "the big guy" in the email.

"10 held by H for the big guy?" reads the email, indicating that Hunter would hand over half his shares to his father.

This comports with a text sent by Hunter to his daughter, in which he says, "Hope you all can do what I did and pay for everything for this entire family for 30 years. It's really hard. But don't worry; unlike Pop I won't make you give me half your salary."

Bobulinski expressed concerns over the Biden family's involvement with CEFC and whether it could compromise a potential future presidential run by Joe Biden.

"And I remember looking at Jim Biden and saying, 'How are you guys getting away with this? Aren't you concerned?'" said Bobulinski during Tuesday's interview. "And he looked at me and he laughed a little bit and said, 'Plausible deniability.'"

"He said that out loud?" asked a stunned Carlson.

"So this is a man who has been drafting off his brother's political office for almost 50 years," said Carlson. "He said to your face essentially, 'We're lying about it'?"

"Anyone watching this interview can look up what plausible deniability means, and the definition is very distinct," Bobulinski said.
"That's remarkable," said Carlson.
"Plausible deniability" means the ability to deny knowledge of illegal or unethical conduct because no evidence exists to prove it, even as the persons actually engaged in illegal or unethical behavior.

"There's two chairmen in the story," Bobulinski clarified. "There's Chairman Ye, who was the chairman of CEFC, and that text from Hunter Biden, he was not talking about the chairman of the CEFC."

Ye Jianming was the billionaire tycoon who was head of CEFC, whose cozy relationship with Hunter has since been exposed by emails and texts leaked from Hunter's laptop. Jianming disappeared in 2018 after Communist officials detained him on charges of treason. New York mayor Rudy Giuliani says Jianming "is at the bottom of the Yangtze River," indicating his belief he was murdered by the Communist Chinese government.

"That is not me writing that. That is not me claiming that," said Bobulinski. "That is Hunter Biden writing on his own phone typing in that 'I spoke with my chairman' — referencing his father."

A text from business partner Rob Walker to Bobulinski also explains that "chairman" explicitly refers to Joe Biden: "When he said his chairman he was talking about his dad."

"If he doesn't come out on record, I am providing the facts," said Bobulinski can be heard saying.

"Tony, you're just gonna bury all of us, man," Walker responds.

The Biden campaign, with the help of mainstream media, continues to push the discredited Russia narrative in response to these damning revelations, even after the DOJ and the FBI concurred with Director of National Intelligence John Ratcliffe that the Hunter story is "not Russian disinformation."

The FBI has confirmed it is in possession of Hunter's laptop, and that it was subpoenaed in December 2019 as part of a wider criminal probe into money laundering.

"The only thing he had was the Biden family name," said Bobulinski to Carlson, summarizing Hunter's foreign business contracts in Russia, China, Ukraine and Kazakhstan, "and the fact that his father at one point obviously was the sitting vice president and potentially would run as the future president."