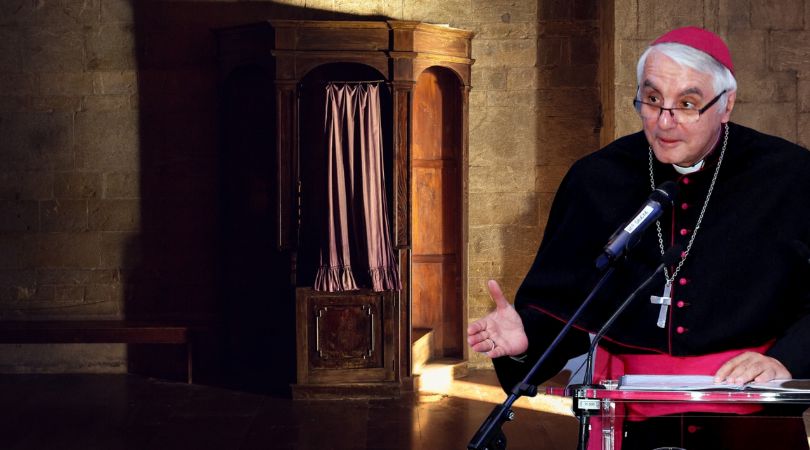 Vatican secretly punished prelate but claimed he resigned due to COVID

The Vatican and the French bishops colluded to keep the real reasons behind the resignation of Michel Santier, bishop of Créteil (a diocese under the jurisdiction of the metropolitan archdiocese of Paris), an investigation by Famille Chrétienne has revealed.

In the 1990s, Santier, a pioneer of the charismatic renewal, forced two young men, including a future priest, to make "striptease confessions" by taking off a piece of clothing for every confessed sin in front of the tabernacle.

Santier was then a popular priest in the diocese of Coutances (Manche), having cofounded the charismatic "Rejoice" community and directing the School of Faith — a one-year prayer training school for young people ages 18 to 30.

The priest "exercised a psycho-spiritual domination and exploited his own influence over two young adults, for homoerotic purposes," Famille Chrétienne reported, noting that the pastor "exploited the sacraments, particularly that of confession."

In 2019, two victims reported Santier's abuse to the archbishop of Paris, Michel Aupetit. The bishop of Créteil confessed to being responsible for the abuse when Aupetit interviewed him.

Other people have just come forward for acts committed against them by Msgr. Michel Santier.

While the archbishop of Paris reported the matter to Rome on Dec. 5, 2019, Santier simultaneously sent Pope Francis a letter of resignation in which he reported the facts of the sexual abuse.

In October 2021, Francis punished Santier for "spiritual abuse for sexual purposes" perpetrated on two adult men and committed him to a "reclusive life of prayer."

The 73-year-old prelate, who had two years to go before the official age for an episcopal resignation, was hospitalized in intensive care in April 2020 after contracting COVID-19.

Santier, a leading figure in interreligious dialogue, told the faithful of his diocese, "I will not have the physical strength to continue my ministry among you until I am 75-years-old."

"At the end of 2019 after reflecting, praying and taking advice, I wrote to Pope Francis to hand over to him my office as bishop of Créteil. He responded favorably and accepted my resignation," the prelate said.

However, he also noted that he was quitting his episcopate, "having gone through other difficulties." Pope Francis accepted Santier's resignation on June 6, 2020, but asked him to remain in the post until Jan. 9, 2021, the day his successor was appointed.

After the revelations in the French media on Oct. 19, five other victims have reported incidents of "unthinkable facts" to Dominique Lebrun, archbishop of Rouen.

In a press release published Thursday, Lebrun, who is also the primate of Normandy, revealed that "other people have just come forward for acts committed against them by Msgr. Michel Santier within the framework of his ministry as a priest when they were young adults."

Eighty percent of the abused children were boys, mostly between 10 and 13 years old.

"After hearing one of these victims directly, I immediately sent a report to the Dicastery for the Doctrine of the Faith via the apostolic nunciature. There is no doubt that the dicastery will carry out a new investigation in the face of the revelations which accentuate the seriousness of the acts for which Bp. Michel Santier is accused," Lebrun added.

The revelations, which come in the wake of the final report of the Independent Commission on Sexual Abuse in the Church (CIASE), have sparked fresh outrage in France.

"The commission drew up an inventory of sexual violence in the Church, which makes for particularly grim reading," the report stated, estimating that about 216,000 children had suffered abuse between 1950 and 2020 at the hands of priests, monks or deacons.

The 2,500-page report excoriated the Catholic Church as "the place where sexual violence is most prevalent, other than in family and friend circles," underscoring how the Church's "immediate reaction was to protect itself as an institution."

Sexual abuse committed by Catholic clerics represented 4% of the total of such violence in French society. It involved between 2,900 and 3,900 clergymen, which represents a percentage of between 2.5 and 2.8% of all clergy, the report revealed.

CIASE also underscored the high percentage of male victims — 80% of the abused children were boys, mostly between 10 and 13 years old. The average age tended to increase over the report's time frame, involving more and more teenagers.

Labeling "the handling of the Santier case" as "a cluster bomb," French historian of religion Martin Dumont blasted the hierarchy for further eroding trust in the Church by secretly sanctioning a bishop and not making this public.

"The Church as an institution, out of cowardice or calculation, has made the scandal worse with silence," lamented theologian Véronique Margron from the Association of French Women Religious.

Santier was active on the board of the International Catholic Charismatic Renewal Service from 1991 to 1998. He was also recognized as an expert on new communities and chaired the Episcopal Committee for Renewal and Spiritual Animation Movements from 2002 to 2005.