In Defense of the Death Penalty

A response to an essay by Dr. Edward Feser and Dr. Joseph Bessette

As Edmond Dantes quietly mutters in The Count of Monte Cristo, "A man is always in need of a friend." This expression rings even truer in reference to scholars and truer still if we are talking about good scholars who enjoy precisely no shelter from constant onslaughts by those who care more about what is popular than what is correct.

Dr. Edward Feser and Dr. Joseph Bessette enjoy no shelter because they've written a definitive book, By Man Shall His Blood Be Shed, which unpopularly demonstrates just how strongly and consistently the Church has endorsed the death penalty over the course of 20 centuries. Instead of opposing the inarguable scriptural evidence these authors adduce, the book's opponents regularly rely on obscure magisterial distinctions, which they claim allow the disregarding of the clear scriptural position of the Church on the matter of the death penalty. 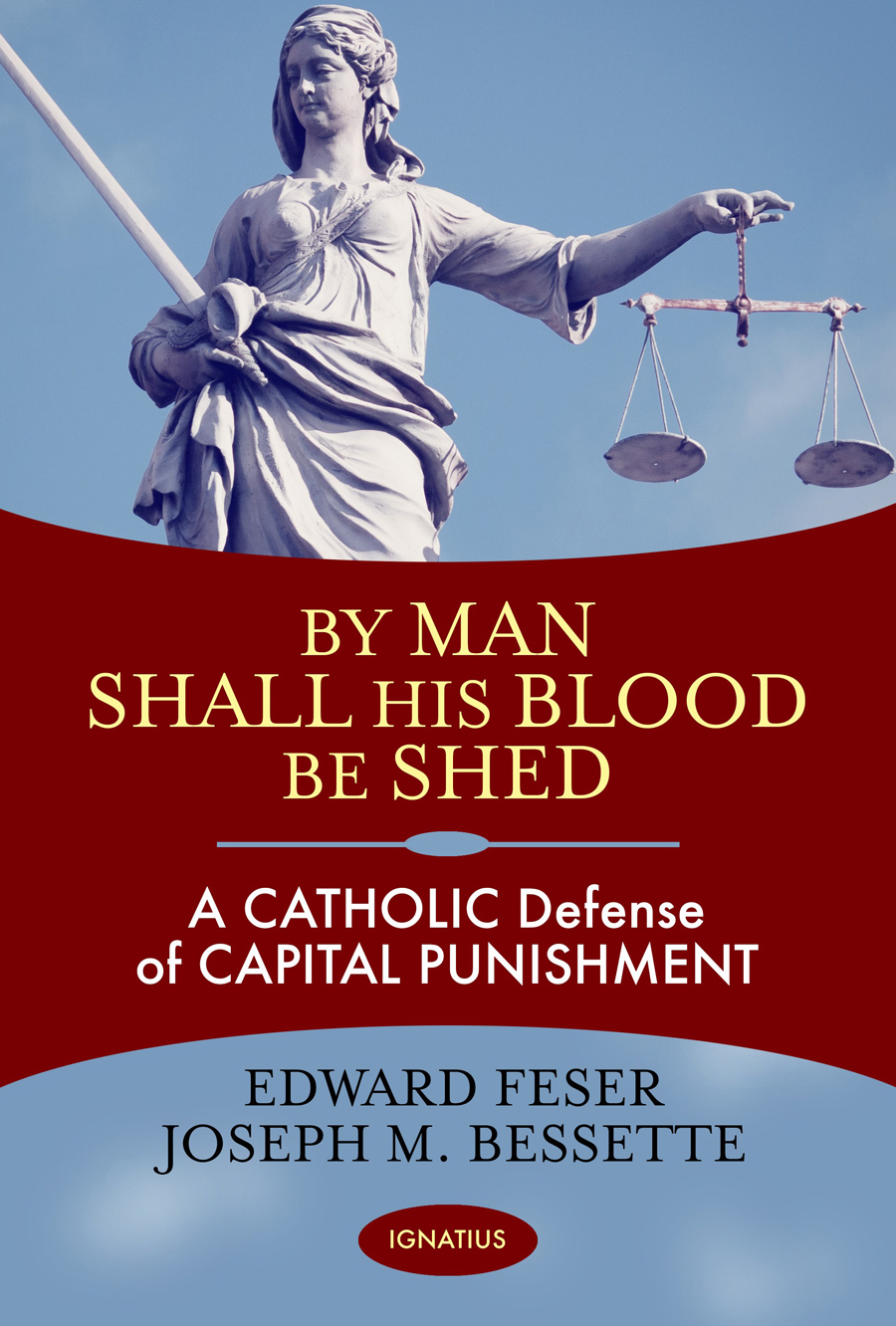 When I first saw that Fr. Michael Patella, rector of St. John's University and Seminary, had written a letter to the editor about Dr. Feser and Dr. Bessette's recent magazine interview (heroically published by Catholic Answers, May–June 2017 issue), I was intrigued. The published letter to the editor bears the epistolary moniker, "It borders on the heretical," about which I thought to myself, "Oh good, something to passively, half-interestedly agree with."

My false assumption, of course, was that the titular slur in Fr. Patella's letter referred to the post-conciliar mania of death-penalty-Jacobinism presently underway in the Church — the push to overturn the Church's timeless teaching — not, of course, to these audacious scholars who have defended a constant but out-of-season Church teaching (affirming the death penalty). How naïve of me!

(Under the same misunderstanding, I also thought to myself, "Borders on?!")

Recurring to — gasp — all of "50 years of magisterial teaching" — a venerable magisterium almost as old as Scientology or the Chrysler Corporation — Fr. Patella asserts that "Church teaching has always been more than logic," a turn of phrase by which, one gathers, he really intends to say "less than." That's what folks always mean by that. And this, in turn, runs him squarely into the multi-heresy of modernism for pitting faith against reason to the anti-Catholic conclusion that somehow truth actually can contradict truth.

Because Drs. Feser and Bessette so devastatingly closed the book, as it were — in the course of their vast compendium on two millennia of clear, unalterable Church teaching — on the modernist idea fissa that the principle of non-contradiction can somehow break down under the auspices of "doctrinal development," it is here worth simply pointing to a couple more slam-dunk passages on the death penalty in the New Testament underemphasized by Feser and Bessette — assuming that Jesus and St. Paul are sufficiently knowledgeable about moral theology to convince one, that is. 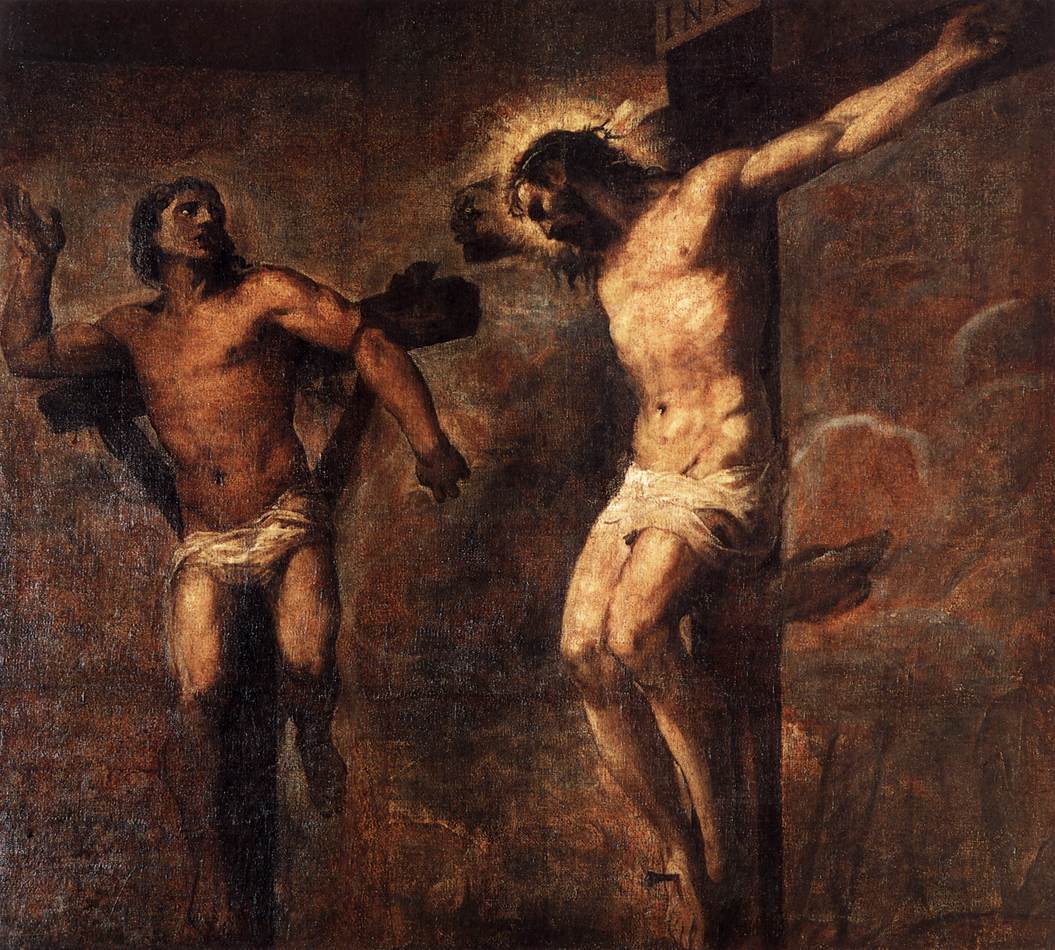 The first passage, that of the "good thief," comes from the Gospel of Luke:

One of the criminals who was hanged railed at Jesus, saying, "Are you not the Christ? Save yourself and us!" But the other rebuked him, saying, "Do you not fear God, since you are under the same sentence of condemnation? And we indeed justly; for we are receiving the due reward of our deeds; but this man has done nothing wrong." And he said, "Jesus, remember me when you come into your kingdom." And Jesus said to him, "Truly, I say to you, today you will be with me in Paradise.'" (Luke 23 39:43)

So, the very, very basic moral-theological problem with the reconfigured, anti-death penalty position mischaracterized as the Catholic one is that its advocates require the moral impossibility and logical antinomy that Jesus sent the "good thief" to Heaven as a reward for articulating and endorsing what (they claim) amounts to grave matter: the objective component of mortal sin. This would be like an adulterer giving a bogus, chauvinist sermon about why it is not immoral for men to cheat on their wives — with Jesus nodding and saying, "Good, today you will be with me in Paradise." In moral philosophy and moral theology, the concept of dessert — Aristotle and St. Thomas Aquinas call it corrective justice, reminding us that it must be proportional in order to avoid injustice — stands as the peerless principle of criminal jurisprudence. Would you have it any other way, Fr. Patella?

In corrective justice, if we follow the wild-eyed trend away from deserved punishment, as Fr. Patella advises, then one puzzles at the alternative: "I am a magistrate of the state, and I hereby derive your crime's sentence based upon a non-proportionalist view of corrective justice: I promise, you don't and won't deserve your punishment. That model of justice is obsolete."

And no, Fr. Patella, my utopian friend, Drs. Feser and Bessette do not contradict the Sermon on the Mount when they affirm the death penalty as an article of criminal jurisprudence, because they do not suggest that the death penalty will or should exist in the Kingdom of Heaven! They wrote a very long book about positive law, which is to say, human justice. As Jesus, the Apostles, and 263 out of 266 popes have affirmed or abided, the death penalty is a just, robust aspect of criminal jurisprudence (notwithstanding the inscrutable logic of the eschaton, whatever it may be).

Perhaps most starkly of all — scholars on all sides seemed to have missed this — Jesus vindicates the employment by the state of the death penalty at his own trial with Pontius Pilate, in John 19:11. What He says should verily end all debate: "Pilate said: 'Don't you realize I have power either to free you or to crucify you?' Jesus answered: 'You would have no power over me [to kill me] if it were not given to you from above.'" Oops, missed that one, Fr. Patella!

You would have no power over me [to kill me] if it were not given to you from above.

Sounds strangely identical to St. Augustine's definition of the state's prerogative to execute criminals: "The agent who executes the killing does not commit homicide; he is an instrument as is the sword with which he cuts. Therefore, it is in no way contrary to the commandment 'Thou shalt not kill' to wage war at God's bidding, or for the representatives of public authority to put criminals to death, according to the law, that is, the will of the most just reason."

There is another man who famously tried to defend himself from death without denying the moral uprightness of the death penalty: St. Paul. He makes a famous remark in Romans 13 to the effect that the government "does not bear the sword in vain." Drs. Feser and Bessette are quick (and sensible) to receive this as further evidence for capital punishment. It is a rather obvious proposition, they remind us.

Yet another stalwart opponent of the death penalty, Dr. Christian Brugger, takes a swing at mitigating the commonsense interpretation of Scripture (pun intended), diminishing the reference to "the general policing authority of the Romans to enforce tax collection" rather than the prerogative of the state to eliminate violent criminals.

Supporting Dr. Feser's interpretation, on the other hand, is the eminent Dr. Scott Hahn and his commentary on Romans 13: "The sword represents the authority of civil government to inflict capital punishment on a society's most dangerous criminal delinquents ... secular government's right to administer the death penalty has been generally acknowledged in the Catholic Church's bimillennial tradition."

So, at least Feser and Bessette are not all on their own. 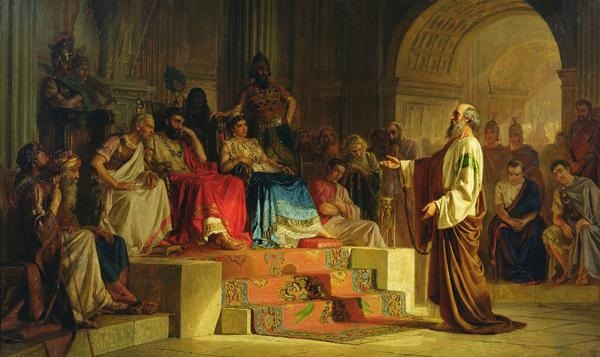 The Pauline corpus in the Bible admits of this interpretation, up and down the page, especially in the slam dunk passage recording Paul's trial. In Acts 25 we read about how Festus is eager to perform a favor for the Jews by executing St. Paul. The latter does not object in principle, except for one small, countervailing fact: he's innocent.

St. Paul's words vindicate both himself and the death penalty, at once: "If I am a wrongdoer, and have committed anything for which I deserve to die, I do not seek to escape death; but if there is nothing in their charges against me, no one can give me up to them. I appeal to Caesar" (Acts 25:11). In other words, St. Paul unequivocally supports the position that there is such a crime for which one might deserve to die, just as Jesus does on the Cross. He explicitly contests that it applies to him, of course.

To suggest otherwise is essentially to aver that St. Paul is more upset over someone telling a lie about him to Festus than he is about the civil authorities murdering him. And that would just violate "ice cold logic," just as Fr. Patella anticipates and even cherishes. But then again, he and his anti-DP fellow travelers don't mind violating logic, as long as they get what they want: a new Church teaching on the death penalty that is decidedly more merciful than Christ's own.

As Alyosha Karamozov quietly whispers to his atheist brother Ivan, "That is rebellion." It is firstly a rebellion against the clear teachings of Christ and His Church, and in the second place, against all those scholars brave enough to stand up for the former. In this article, we merely tried to point out a few extra-Biblical passages which support the position of the beleaguered but indefatigable Dr. Feser. But these passages are insufficient for a conclusive view on the matter. His book with Dr. Bessette, By Man Shall His Blood Be Shed, however, is not. It is exhaustive and should be consulted as the Catholic death penalty guide par excellence. God bless its authors.

Timothy J. Gordon, Ph.L., J.D., M.A., studied graduate philosophy at "the Greg" in Rome. He also holds degrees in literature, history and law. He has lectured on or instructed Logic, Church History, Ethics and Constitutional Law. He lives with his wife and four daughters in central California. His book Why America Will Perish Without Rome will be released in late 2017.