Instead of Blocking Italy, They Have Blocked the Mass 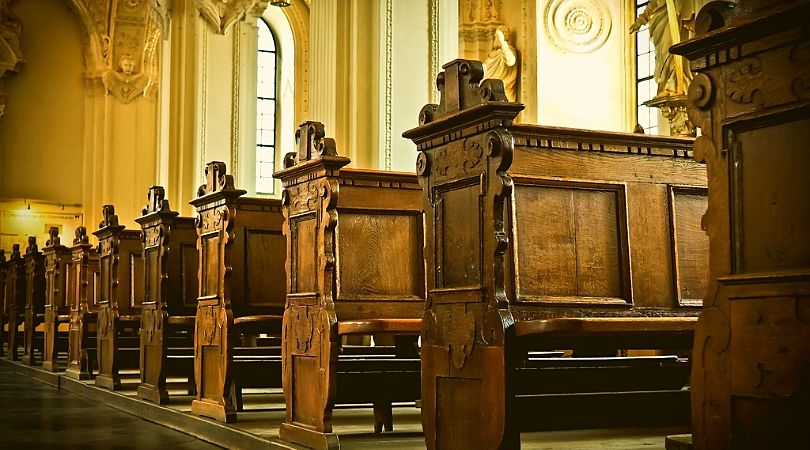 The Vatican misses an opportunity

This pontificate began with the slogan "the Church that goes out," and now the pope and cardinals are literally barricaded inside the Vatican (even the Angelus is now being done via streaming) out of the fear of the coronavirus. They said they were revolutionaries but they have proven to be a lot of frightened Don Abbondios (the priest in Manzoni's famous novel The Betrothed who refuses to marry Renzo and Lucia because he is afraid).

No more bridges, only very high impassable walls, behind which the pope, cardinals and monsignors can all hide.

The great hypocrisy of the "progressive Church" has also been revealed. Bergoglio said that the shepherds ought to take on the smell of the sheep, but he and the shepherds have all run away, and now they are far from the sheep and their breath. Only a few parish priests remain in the trenches.

The other Bergoglian slogan was: "the Church as a field hospital." But as soon as the epidemic broke out, all traces of the field hospital were lost. We don't see any Charles Borromeo going around ministering to the sick. Everyone is holed up inside their chanceries.

The "doctors" who should have been caring for souls have abandoned the flock, adhering without objection to the government decree that has suspended all Masses with the faithful present throughout all of Italy until April 3 — an unprecedented event.

The Bergoglian church has decreed that for the faithful the Mass is ended, and for the first time in 2,000 years the country that is the center of Christianity will remain completely without Mass, for days on end.

Such a development might leave atheists and agnostics indifferent, but for millions of Catholics it is a true shock — not only because they are being deprived of the eucharistic sacrifice right in the middle of a tragic epidemic in which the need to pray is felt more intensely, but also because of what the Mass is in itself. Padre Pio of Pietrelcina used to say: "The world could exist without the sun, but it could not exist without the Holy Mass."

Through this image the great mystic saint wanted to make people understand the infinite power of intercession and protection — for all of humanity — that is contained in the daily renewal of the sacrifice of Christ on the Cross: The Mass is the great exorcism that protects the world from evil and self-destruction.

It is difficult to see why daily Masses should be suspended throughout all of Italy when shopping centers, bars, restaurants and city centers are not closed down, not even in the areas with the highest level of contagion.

Someone has recalled the apocalyptic prophecy of Daniel, who foresaw "the time the daily sacrifice is taken away" and "the abomination of desolation is set up" (Daniel 12:11). It is certainly a traumatic event for the Church.

There are those who maintain that, according to the Concordat and also the Constitution, it is questionable that the generic words of the government decree (banning religious ceremonies) actually intended to abolish all Masses. But what is certain is that the Vatican Secretariat of State and the Italian Bishops' Conference (CEI) did not even attempt to discuss it.

But they would have had excellent reasons to object. It is difficult to see why daily Masses should be suspended throughout all of Italy when shopping centers, bars, restaurants and city centers are not closed down, not even in the areas with the highest level of contagion. Likewise, trains and planes continue to run and everyone is continuing to go to work.

Why should it be easier to spread contagion at Mass than in the office, on the subway or at a restaurant? Besides, at most weekday Masses there are usually no people and four cats in attendance, so they have plenty of room to spread out and be far enough apart.

It seems that the Italian (left-wing) government, which enjoys the stubborn support of Bergoglio's Vatican, has — to say the least — a negative prejudice against the Mass. But the Vatican and the Italian bishops are even worse.

In fact, even if they had to give in to the government, they could have proposed that in every city at least a few churches would be chosen in which Mass would be celebrated continuously (let's say every two hours) in order to send a message to the faithful and the Italian people of continual intercessory prayer for our country. This would also permit people to attend such frequent Masses in more diluted numbers, thereby maintaining the required one meter of distance from each other.

In other parishes, the bishops could have ordered perpetual adoration, all day long, as another way of constantly interceding for Italy for protection against the epidemic.

And not only that, the bishops who have suspended the Masses and closed the churches could have sent priests — or better yet the bishops could have gone themselves — to be present in the hospitals at the service of the sick (those with the coronavirus as well as others) and of the medical and nursing staff.

What a witness it would be if all the bishops during these days were present in the hospitals. But instead, they are all holed up in the chanceries.

At times they have even sunk down to the level of the absurd, such as when the archbishop of Florence (Cdl. Giuseppe Betori) went so far as to write: "The government provision ... seems to somehow indicate private prayer as a path to follow in order to continue to nourish our spiritual life."

As if Prime Minister Giuseppe Conte, spokesman Rocco Casalino, and Minister of Health Roberto Speranza have now become the new pastors of Italian Christians' spiritual lives. Indeed, the pope and bishops have abdicated their responsibility.

They could have launched a great prayer campaign for Italy, leaving all of the churches open, even at night, but Bergoglio is allergic to the word "Italy" (as well as to prayer).

Today all of Italy has been essentially brought to its knees, except for those who should be physically on their knees — the pope, the cardinals, and the bishops.

The message that has reached the people — whether they are aware of it or not — is terrible: It seems that in times of disgrace and suffering it is better to leave God aside because he is useless. But if you don't need God then, you will never need him. (Or do we need to remember him only so we sign up to pay the Italian religious tax?)

For the first time in centuries during a calamity like this God has been totally canceled out. For 20 centuries in this land the opposite has happened. All of our cities have churches that were built ex-voto as an offering in thanksgiving for the end of one plague or another, and during such times cities have always placed themselves under the protection of the Blessed Mother. But today they have canceled God.

The coronavirus, among other things, literally marks the failure of this pontificate, because the Mass guards the true treasure of the Church and not knowing how to defend it means annihilating the Church.

It is an unheard-of situation that is completely confusing to Catholics, who not only feel abandoned by those who should be their shepherds but also feel deprived of the presence of God just at the moment when their need to trust him and pray is greatest.

The coronavirus, among other things, literally marks the failure of this pontificate, because the Mass guards the true treasure of the Church and not knowing how to defend it means annihilating the Church.

In the Catechism of the Catholic Church desired by John Paul II and Cdl. Ratzinger, it says: "Sine dominico non possumus vivere" — "We cannot live without the Lord's Day" — said the priest and martyr Saturninus at the beginning of the fourth century, during one of the most ferocious anti-Christian persecutions, that of Diocletian in A.D. 304. Accused of having celebrated the Eucharist for his community, Saturninus admitted it without reticence: "We cannot live without the Eucharist." And one of the martyrs added: "Yes, I went to the assembly and I celebrated the Lord's Supper with my brothers because I am a Christian."

The Church has always pointed to their witness as an example. And today? The problem is the loss of faith and forgetfulness of Christ.

There is a question of Jesus in the Gospel that made Paul VI reflect, when Jesus asks: "When the Son of man comes again, will he find faith on the earth?" (Luke 18:8).

In Italy, for now, the answer is yes. But in the Vatican and the chanceries, his search would be much more tiring and perhaps without success.

First printed in Libero March 9, 2020 and at Antonio Socci's website.