Abp. Eamon Martin is catching heat for comments he made after the Irish abortion referendum

ARMAGH, Ireland (ChurchMilitant.com) - Ireland's senior prelate, Abp. Eamon Martin, is walking back controversial statements he made in the wake of the country's legalization of abortion.

In a Sunday report on the push to draft a legalization bill, Irish broadcaster RTÉ included an exerpt from a pre-recorded interview with Martin, archbishop of Armagh and Primate of All Ireland. Reflecting on the national vote, the prelate urged pro-lifers to "work very actively to try to ensure that the legislation that is passed, as [Prime Minister Leo Varadkar] himself said, allows for abortion which is rare, which is safe, and which is legal."

His statement shocked many Catholics, who countered that "rare," "safe" and "legal" abortion (an activist catchphrase) is neither pro-life nor Catholic.

On Thursday, Church Militant reached out to Martin Long, Director of the Catholic Communications Office for the Irish Episcopal Conference, for an explanation. Long told the apostolate Abp. Martin's comments were taken out of context.

"Regarding the RTÉ news broadcast," he said, "Archbishop Eamon Martin asked me to tell you he agrees fully with the Church's teaching on abortion and that he should not have used the quotation which you cite, which came from the Irish prime minister, Leo Varadkar."

Long continued: "The archbishop's interview was heavily edited in the broadcast and his words taken out of their context in the very short pre-recorded clip."

"This broadcast does not reflect his position, as he has consistently spoken out against abortion and continues to call on all people to reject abortion and to choose life," he added.

In it, the archbishop hinted at dark days ahead for Ireland.

"I am very concerned about the implications for society of interfering with the fundamental principle that the value of all human life is equal and that all human beings, born and unborn, have inherent worth and dignity," he reflected. "We have elevated the right to personal choice above the fundamental right to life itself."

"In the midst of so much disappointment," he added, "it remains as important as ever to affirm the sanctity of all human life, and that the direct and intentional taking of the life of any innocent human being is always gravely wrong."

But some faithful Catholics suggest Martin's comment to RTÉ wasn't just a verbal gaffe, arguing it exemplifies a pattern of leadership failure among the Irish hierarchy.

In post-referendum interview with RTÉ Radio, Abp. Martin again testified to the failure of this lead-from-behind approach.

We've been aware for some years now of a drift away from practice of the Faith in our congregations.

When asked if Ireland's legalization of abortion represents "a stinging rebuke" to the Church in the country, Martin responded he was "deeply saddened" by the referendum, in which two out of three voters — most of them self-identified Catholics — consented to the murder of Ireland's unborn.

"We're certainly ... in a new time and a changed culture," he noted, "but it's not something that has come out of the blue."

Reflecting further, the archbishop said that "stinging rebuke ... for the Church" in Ireland isn't new. "We've been aware for some years now of a drift away from practice of the Faith in our congregations ... . We're certainly in a new space for the Church in Ireland, and the abortion referendum ... confirms that."

He made no mention of why the Faith is collapsing in his country.

RTÉ Radio went on to note the Church spoke more quietly in the lead-up to last week's referendum compared to the early 1980s, when its robust reaffirmation of Catholic teaching inspired the Eighth Amendment and enshrined the constitutional right to life for the unborn.

"The Catholic Church was very prominent back in 1983 during the campaign ... is there some reason that you weren't more prominent in [the 2018 campaign]?" Martin was asked.

The archbishop dismissed the claim, insisting that "At the level of our congregations, and as teachers of the Faith — as bishops and as priests — we were very actively involved with our congregations, affirming and explaining the Church's teaching on the right to life for all people."

Martin's statements contrasted with those of Bp. Kevin Doran of Elphin, who in a Monday interview with RTÉ Radio warned that anyone who voted "yes" in the referendum committed a mortal sin if they "new and intended abortion as the outcome" of their vote.

Bishop Doran reminded listeners that "every person's vote counts ... [and] has both a moral and political significance."

Doran advised Catholics who "voted Yes knowing and intending that abortion would be the outcome then you should consider coming to confession, where you would be received with the same compassion that is shown to any other penitent." 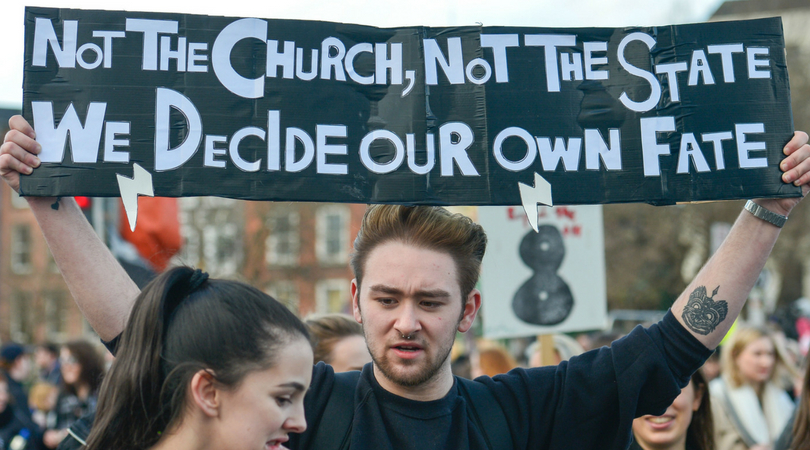 Ireland: A Chronology of De-Christianization
By Church Militant   •   0