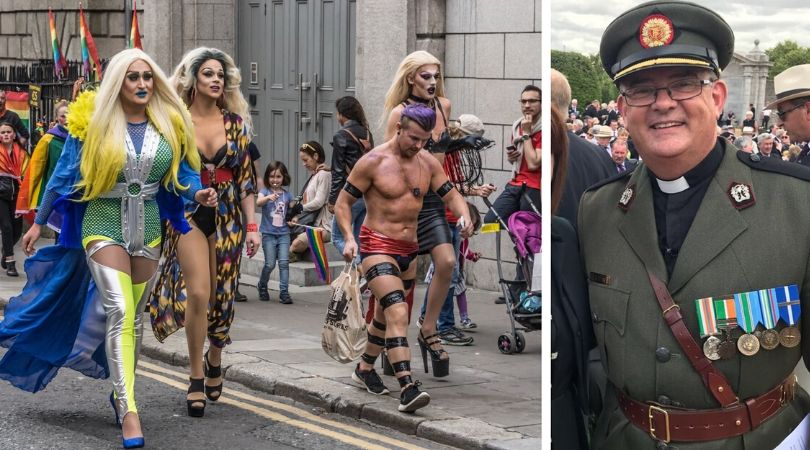 'We have much to learn from your gifts'

In an official video released by the Chaplaincy Services, Fr. Madigan said he would have been "privileged" to walk "side by side with our LGBTQI+ members, showing solidarity and support."

While the June 28 parade was called off because of the Wuhan virus, the Catholic priest who was expected to lead the chaplains in their first-ever participation in the gay pride parade, used the virtual pride parade video to express solidarity with LGBTI soldiers.

"We seek your flourishing and happiness, and recognize that we have much to learn from your gifts, courage and experience of life," Madigan said, noting that "our diversity is rooted in a deeper unity."

"All members of the Defense Forces, especially our LGBTQI+ colleagues know that your Chaplaincy Service is in solidarity with you, be you of any faith or none," Madigan stressed.

The video does not mention God or Jesus or the Catholic Church, even though the priest, who heads a team of 15 chaplains, concludes by "wishing you and your families every blessing and all that is good in life."

"I have spoken to many serving members who are disheartened and discouraged by the head chaplain's decision to give his full support and take such a partisan position," an IDF infantry soldier, who is a practicing Catholic, told Church Militant.

I have spoken to many serving members who are disheartened by the head chaplain's decision to give his full support and take such a partisan position.

"While understanding that the chaplaincy resource is open to all serving members, adopting such a party-political and ideological position on a single issue isolates faithful Catholics, other Christians and those of other faiths who feel under pressure by holding traditional views on marriage and family," the soldier said.

"This is the case especially at a time when the entire government, mainstream media and society at large are charging those who hold traditional views on marriage as being bigots," he lamented.

Church Militant contacted the chaplain, asking him how he could reconcile his role as head chaplain representing the Catholic Church, with "pride" — a term that tops the list of the seven deadly sins and with the Church's teaching on homosexuality.

The Catechism of the Catholic Church unambiguously declares:

Church Militant also asked Fr. Madigan how he could join a march which reveled in exhibitionist displays of the "most obscene and lewd nature" — many "associated with the most perverse sexual behaviors including bestiality and sadomasochism — all this celebrated in front of children."

Anyone who has been to a parade has likely seen the procession of leather animal costumes, kinky costumes in every hue and more skin than is normally exposed in public.

The 2019 Dublin pride parade openly promoted "polyamory" — the practice of engaging in sexual relationships with multiple domestic partners with the consent of all involved.

"Anyone who has been to a parade has likely seen the procession of leather animal costumes, kinky costumes in every hue and more skin than is normally exposed in public," writes pro-gay journalist Brianna Sharpe.

"Pride has always had a kind of outrageous edge to it. And should we alter that? It is not the Santa Claus parade, and it never was. It shouldn't be. It can't be," agrees David Rayside, retired politics and sexual diversity professor at the University of Toronto.

"It takes sunshine and rain to make a rainbow, and its beauty is made up of many colors and hues all sitting together in perfect harmony," Madigan added, in appreciation of the LGBTQI+ soldiers.

Madigan was ordained in Croagh in 1991 for the Society of St Francis de Sales (Salesians), and was incardinated in the diocese of Limerick in 2003 when he was appointed chaplain in Castletroy Community College, a post he held until taking up the chaplaincy at Sarsfield Barracks, where he served for nine years.

He also served as diocesan communications officer for a period until 2007, and presented a show on Live 95FM and 102FM local radio.

It takes sunshine and rain to make a rainbow, and its beauty is made up of many colors and hues all sitting together in perfect harmony.

Brendan Leahy, bishop of Limerick commended Madigan as "a very popular chaplain in Sarsfield Barracks both in his duties here and during his service abroad with the peacekeeping operations."

Meanwhile, Spanish Jesuits are showing support for Madrid Pride Week (July 1–5). The event will be held online this year due to the Wuhan virus restrictions.

In a pro-gay article for a Jesuit publication, Fr. José María Rodríguez Olaizola, S.J. concedes that the LGBT parades are celebrated with "all its mix of exhibition, visibility, commercial montage, frivolity and challenge."

Father Madigan says he looks forward to being present at next year's pride march. The head chaplain did not respond to Church Militant's request for comment.

Watch
No Religious Services for Navy Personnel
By David Nussman   •   0