The devil is at work in Ireland

LONGFORD, Ireland, October 8, 2015 (ChurchMilitant.com) - A priest in Ireland suggested the devil was behind the country's recent legalization of "gay marriage," and now his bishop is apologizing for the comment.

Father Joseph Okere apparently said during a homily that the passage of Ireland's same-sex "marriage" referendum in June was "evidence the devil is at work in Ireland." Those are his reported words, at least; there's no recording or confirmation of his exact words. 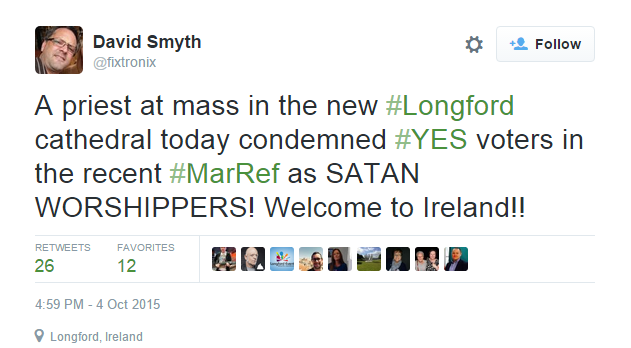 After further uproar from LGBT activists, Ardagh's Bp. Francis Duffy has already caved with an apology.

"Comments were made about the recent marriage referendum while reflecting on the Scripture Readings of the day which had at their core the theme of marriage," he notes. "The language used caused offense to some people."

"Father Joseph did not intend to hurt anyone and is sorry for doing so," he says. "I too apologize for any insensitivity."

The story is similar to another case in Ireland in which a faithful priest condemned Ireland's legalization of same-sex "marriage." That priest, the recently ordained Fr. Tom Doherty, likewise dealt with an onslaught of pro-gay outrage and agitation.

Despite Bp. Duffy's apology, high-ranking prelates in the Church appear to agree with Fr. Okere's assessment. The Vatican's Secretary of State, Cdl. Pietro Parolin, has referred to Ireland's legalization of same-sex "marriage" as a "defeat for humanity." In addition, Cdl. Robert Sarah, head of the Vatican's Congregation for Divine Worship, recently called legal recognition of homosexual unions "retrogressive for culture and civilization."

The former prefect of the Church's highest court, Cdl. Raymond Burke, has said so-called gay marriage "is a defiance of God," deeming it worse than pagan depravity. "Pagans may have tolerated homosexual behaviors; they never dared to say this was marriage," he said.

Likewise, Bp. Athanasius Schneider, with anti-Catholic phenomena such as same-sex "marriage" in mind, has proclaimed that "the natural family and the Christian family have become the principal object of attack for the destruction of the civilized world by the neo-Marxist gender ideology."

And finally, there's Pope Francis himself, who, prior to becoming Pope, once said of homosexual "marriage" legislation, "[T]his is not simply a political struggle, but it is an attempt to destroy God's plan." He went on to call it a "'move' of the father of lies, who seeks to confuse and deceive the children of God."

Given this history of high-ranking Church prelates unapologetically condemning government-endorsed sodomy, it would appear that Fr. Okere is in good company with his stern warning for Ireland.