Tim Jackson: "Our leaders apparently don't want to face the ugly truth of how the child is killed"

DUBLIN, Ireland (ChurchMilitant.com) - A Dublin man has gone on a hunger strike until politicians watch a video about dismemberment abortions.

While Ireland is engaging in a heated national debate over whether to repeal the country's Eighth Amendment banning abortion, one man started a hunger strike on Monday to force lawmakers to watch a video on what exactly abortion is.

Tim Jackson, an independent candidate who ran for Ireland's parliament in 2016, wants Leo Varadkar, Ireland's first openly gay prime minister and the Oireachtas Committee on Abortion to watch exactly how a child would be killed in a dismemberment abortion before they continue discussion on the referendum to repeal the country's ban on abortion

Jackson says, "Our leaders apparently don't want to face the ugly truth of how the child is killed, despite pushing for a repeal of the Eighth Amendment." Launching his hunger strike at the lower house of the Irish parliament with a Facebook post, he says he will only be drinking water but won't starve himself to death.

Jackson contacted Varadkar and Sen. Catherine Noone on Saturday, denouncing the legalization of abortion as "the single worst policy-decision ever made by an Irish government," adding, "Democratic votes do not extend to robbing humans of fundamental rights."

"If An [sic] Taoiseach and the committee refuse to view an abortion before proceeding further with deliberations, I can only assume you wish to be willfully ignorant of the barbarity of the procedure and what Irish children will suffer."

Jackson gave them three days to respond to his request to view the video, and when they failed to contact him, he launched the hunger strike.

Jackson says 1 in 20 babies in Ireland are aborted, and if the referendum passes, it will be much higher. He notes that in Britain where abortion is legal, it is 1 in 5 babies that are aborted. Babies diagnosed with Down Syndrome in utero are almost always killed. In Britain, it is 90 percent and Iceland aborts almost 100 percent of them. "This is a war on unborn children, and people of good will have to step into the breach and regardless of the criticism that we'll receive, it will be worth it," Jackson says.

Jackson is part of the White Flag Movement, that has started a petition calling for Varadkar and the Abortion Committee to watch the video on abortion. The site suggests peaceful protests and hunger strikes to end the "war on the unborn." Calling this "the most important work on earth" and the "beginning of social justice," it decries the 50 million deaths by abortion every year as "a holocaust."

The White Flag Movement website also provides links and supports for women who have had an abortion or are considering one. They are calling for all pro-life advocates to fly white flags and join the hunger strike, "Because killing should never be a choice."

He says, "There is no outcry over a human being that's killed or denied a grave in this instance; there's actually political support for it." 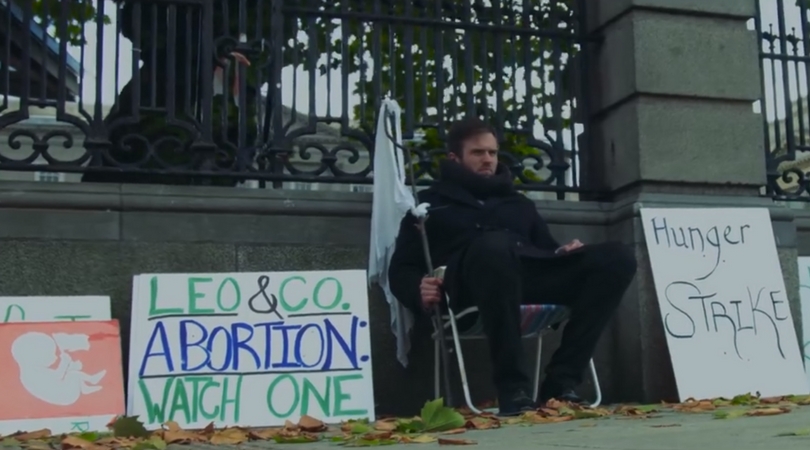