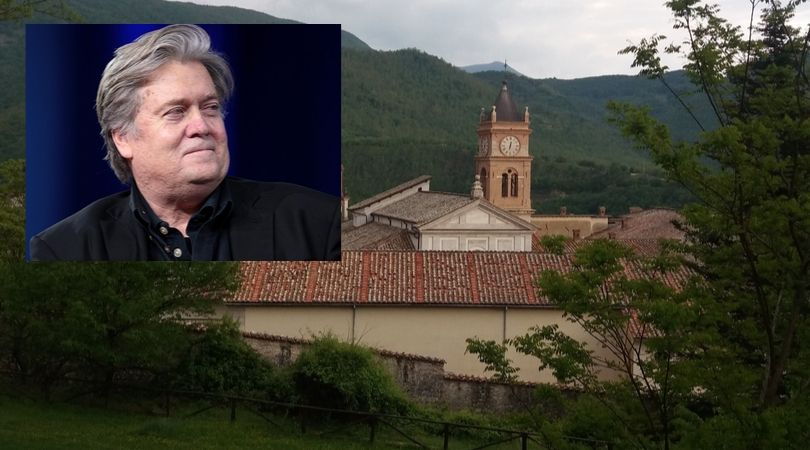 A fundamentally political move against the conservative populist

VIA TRISULTI, Italy (ChurchMilitant.com) - Italy's ministry for culture is claiming it has evicted Steve Bannon's "Gladiator School" from a 13th-century Italian monastery, 38 miles south of Rome.

"As the DHI indicated when the Ministry for Culture first announced this politically motivated manoeuvre back in May, we will fight our case in court with every resource at our disposal," said Benjamin Harnwell, director of the Dignitatis Humanae Institute, in comments to Church Militant.

"We look forward to demonstrating that the objections against the DHI promoted by the Left over the last two years are 100% without any foundation whatsoever," he added.

According to Agence France-Presse, the ministry announced on Oct. 11 that the Dignitatis Humanae Institute (DHI) had "falsely claimed to have the necessary requisites to take part in a tender to lease the monastery," leading to its eviction.

Steve Bannon, former White House advisor, has sought to transform the medieval monastery into the "Academy for the Judeo-Christian West," nicknamed his "Gladiator School," a place where he can mold cultural and political "gladiators" to carry out his fight against liberal elites, and has invested significant funds into the project.

Harnwell has maintained that the ministry — and its left-wing alliances — have sought to place every obstacle in front of the successful institution of the school since the idea materialized.

The institute had been given use of the site for 19 years in February 2018, but forces resisting the establishment of the school began opposing the move almost immediately.

Blows began to be leveled against the plan earlier this year. Bannon's project is moving ahead despite the Italian culture minister's attempts in May to revoke a license to operate the monastery.

Italian Culture Minister Alberto Bonisoli said the DHI had obtained the concession to use the Trisulti monastery for Bannon's school but "had failed to meet the contractual conditions to lease it, had not paid the rent and had not carried out required maintenance work."

Harnwell insists Bonisoli is acting under "political motivations," spending six months "trying desperately to find any pretext whatsoever it can to get us out of Trisulti."

Undeterred, Bannon summed up the importance of the struggle in June: "The fight for Trisulti is a microcosm of the fight for the Judeo-Christian West."

Students from around the globe have been gathering to begin the first three-week courses later this year, and the DHI had been in the process of getting planning permission to put bathrooms in the monk's cells, redo the sewer system and install Internet access.

Bannon's project is moving ahead despite the Italian culture minister's concerted moves to can the initiative.

The DHI is a Rome-based organization that describes itself as "a think tank" with the aim of protecting and promoting "human dignity based on the anthropological truth that man is born in the image and likeness of God." It works with legislators to promote the Christian voice in the public arena, which it says is being silenced.

Harnwell says of his motivations:

We must rediscover the sacred respect for the human person. Man must never become the means to a utopian end: the wellbeing of Man is in itself the end. Subverting this basic truth is how the great totalitarian ideologies of the Twentieth century — International Socialism and national Socialism wrought their evil Their seductive temptations linger on: work done to promote human dignity is essential to the very survival of Civilization itself.

Bannon has described Harnwell as "the smartest guy in Rome ... [he's] always a tough guy — he comes across as a monk, but he's actually a very tough guy."

Trisulti monastery was first a Benedictine abbey founded in 996 by St. Dominic Abbot. A latter structure was erected starting from 1204 on a more accessible location by order of Pope Innocent III, who assigned it to the Carthusians. The abbey church, dedicated to St. Bartholomew, was consecrated in 1211.

The name "Trisulti" may derive from Latin tres saltibus, meaning "at the three jumps," which was the name of a castle that commanded "three" passes leading to Abruzzo, Rome and Ciociaria. 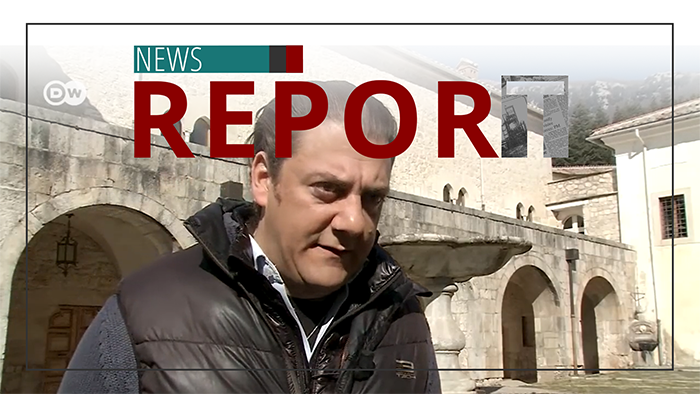