Italian Vatican Expert on Why He Fights for the Church

Dr. Aldo Maria Valli, an Italian writer and Vatican expert, was among the first to publish Abp. Carlo Maria Viganò's testimony on his website and remains in contact with him. He offered comments to Church Militant on why he has involved himself in this war for the Church and what he hopes from all of this.

It isn't easy for me to explain why I'm combatting this battle for truth. Many feelings abound within me, and I strive to find the necessary lucidity as I know that every word can be misinterpreted. But I shall try.
Francis has been elected to rapidly turn the page after the crisis of the final part of Benedict XVI's pontificate, marked by the news leak regarding the apartment, the arrest of his butler, the controversies about the IOR (L'Istituto per le opere di religione, commonly known as the Vatican Bank) and the impossibility of efficient management of the governmental machine.

From an image point of view, the operation succeeded, as Francis effectively established himself with a new style, one much esteemed by the dominant culture. But a price certainly has been paid: superficiality in the analyses of problems and phenomena (migration, ecology, globalization, Islam), doctrinal ambiguity (Amoris Laetitia), demagogy in the ecumenical and interreligious confrontation — and as a direct consequence, the disconcertment of so many faithful. As for the curial reform, he bit off more than he could chew, delivering some results, but also with high costs and much confusion.
Francis has made the idea of divine mercy the core of his teaching. He believes that for today's mankind — largely indifferent to the Faith but with a pinch of nostalgia for the word of God — mercy is the key that will open the door to the heart and restore the connection between the Church and the distant creature. There's a logic in this vision: to point more to the love of God and less to the moral obligations derived from the Faith can be a way to bring a few sheep back to the paddock.
But Francis banalized divine mercy, stripping it from the dimension of judgment and transforming it in "mercinism." It's true that the Christian God is a welcoming father that never tires of forgiving, but a grasp of conscience, a conversion, is required from the son. But from Francis' preaching, it's almost as if God has the duty to forgive when faced with the right to forgiveness demanded by the creature. This is why secularists and unbelievers like Pope Francis so much: he confirms them in their choices. But in this way, he confuses those who don't feel confirmed in the Faith and see the entire operation as a concession to the world.
From what I see and hear, people ask a lot of the Church (or, rather, demand) but they aren't willing to be put to discussion. And Francis, in great part, reinforces this behavior, when, for example, every time he speaks generically of an "outbound," “non-self-referential" Church. But what does "outbound" mean? If to move outward I must renounce my identity and water down the depositum fidei, I certainly am not rendering a good service to the Church or to souls.

I'll even say the Church has the duty to be self-referential, in the sense that it must continually search for Her center: Jesus Christ. There's no acceptance without moral and doctrinal guidance, without a clear proposal towards conversion. Otherwise, there's only generality and words of superficial consolation. Spiritual direction implicates the necessity to express clear judgments regarding what is objectively good and what is objectively evil.
In this respect, even with all the cordiality towards the world, the shepherds cannot compromise. To appeal to the sole concept of "discernment" is ambiguous. Discernment is always needed, but as a means to arrive to God, not to justify everything and legitimize the ruling subjectivism.
The Catholic Church is dramatically divided. One could say it has always been, because the divisions, or at least the incomprehensions, have been there ever since the first Apostles, but I now see that the risk of schism is real. On one side, we have the Church of "mercinism," of the dialogue with the world at any cost; on the other, the Church of those who wish to render glory to God, not to man.
In the Catechism, we read that the primacy of the successor of Peter has the purpose to guard the depositum fidei, which reached us through tradition so that this patrimony isn't dispersed. The confrontation with the world is necessary and dutiful because the Church lives in the world, but that cannot ever come at the cost of yielding or compromising. This is why the slogan "build bridges, not walls" sounds superficial and ambiguous. Sometimes, a wall is required in order to defend identity and faith. It's not about pride, but about awareness of the fact that we're called to guard and perpetuate this treasure.
Francis, unfortunately, is leading the boat of Peter towards the rocks of relativism and subjectivism.
The great challenge of these days, as Benedict XVI had well understood, is the fight on the land of subjectivism and therefore of relativism. Under this profile, it's possible to see that two churches exist already: the one that made dialogue with the world some sort of dogma, legitimizing the interpretative subjectivism and moral relativism, and the other, who continues to turn to divine law. The crack is clear. The task of Francis' successor is going to be of an unparalleled difficulty.
The doctrinal ambiguity of Francis reaches its peak in Amoris Laetitia. The document has everything in it. There's the exaltation of the Christian matrimony, founded on indissolubility and openness to life, but as we well know, there's also the idea that, when encountering human behavior, the Church must proceed judging case by case, which opens the road to subjectivism and relativism, as it always happens when dispensations to the general rule are introduced.
Overall the document generates confusion for its ambiguity. And this is so true that we are swarmed with interpretations, in one sense or another. It's true that pastors are called to autonomy, but this is unacceptable. Friends tell me that I am too distrustful, because "doctrine's been confirmed," they claim, "with a few exceptions." But the problem lies exactly in these "few exceptions." When this principle is introduced, it opens a chink from where subjectivism overflows.
And it's useless to invoke discernment, because, I must repeat it, discernment only makes sense in the presence of clear principles, otherwise it's just used to legitimize all other options. Which is exactly what the world wants. And through this path, the Christian message is reduced to a vague sentimentalism who throws truth aside for the sake of the "superdogma" of dialogue.
In the beginning of this pontificate, I truly believed in Francis. I have loved Benedict XVI, but I thought Francis could bring a climate of more confidence in the Church. I grabbed onto this hope with all of my strength, but after Amoris Laetitia, I understood I was wrong. Francis, unfortunately, is leading the boat of Peter towards the rocks of relativism and subjectivism.
And if the helmsman makes a mistake in the route, it's the duty of every baptized person to call him back and ask him to convert, respecting the eternal law of God and the sane doctrine — enough of using pastoral and discernment as an alibi. Because a pastoral move founded on a warped doctrine can only bear poisoned fruits and a discernment whose pole star isn't the divine law serves only as justification for sin.
Then, in these recent times, the knowledge of Msgr. Carlo Maria Viganò has further opened my eyes to the moral corruption at the summit of the Church. As a mere Catholic, for a long time, I chose not to see and not to believe the warnings. But at some point, this wasn't possible anymore. And this is when I chose to support Msgr. Viganò in his battle: purification calls for radical change, but change can only take place in truth. I am very much in pain, but I firmly believe this is the only road left.
It's a high price to pay. I am the Vatican expert for TG1, the main newscast of the first Italian television network (RAI, the state-run television channel). I could have had it easy, avoiding the exposure. I could continue to enjoy the privileges of a prominent position, envied by many. Instead, I put it all into question. Humanly speaking I had a lot to lose and nothing to gain.
So why have I done it? Because what is close to my heart is the judgment of God, not the judgment of men. And when our good God finally calls me home, I want to be able to tell Him that I've done all that I could to save the Faith, for the good of the Church. 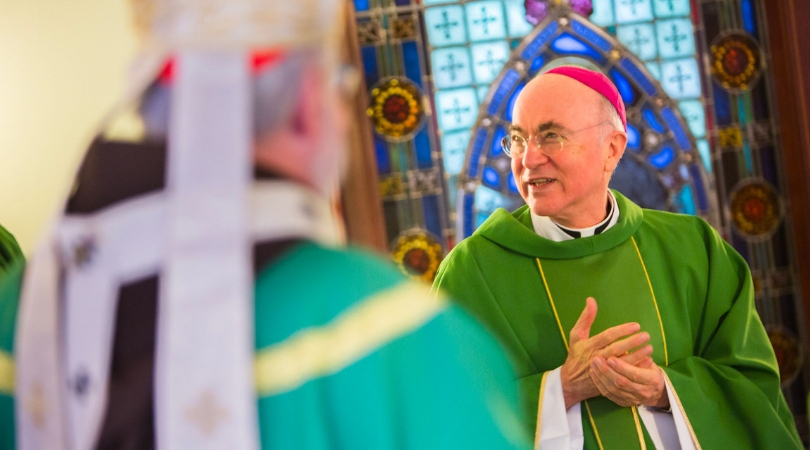