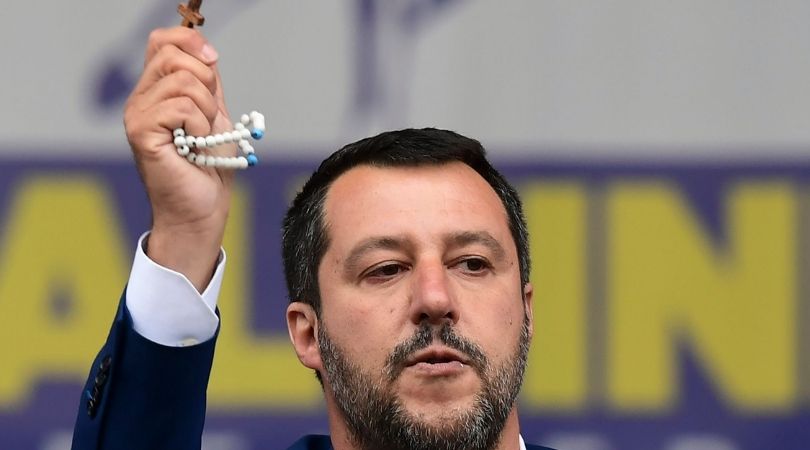 Salvini: 'I entrust Italy, my life and your lives to the Immaculate Heart of Mary'

ROME (ChurchMilitant.com) - Vatican officials are at odds with a Catholic populist leader in Italy who is tapping into the Catholic sentiment of the Italian people he represents.

Kissing the Rosary, he then looked up to the statue of the Blessed Virgin Mary on top of Milan's 14th-century cathedral and said, "I entrust Italy, my life and your lives to the Immaculate Heart of Mary, whom I'm sure will bring us to victory."

The Vatican's response to these expressions of Catholic faith by an Italian leader was swift and cold, owing to the fact that Salvini and other populists aren't in step with the Vatican's policy of embracing mass migration of Muslims. The following day, the Vatican's second most powerful person, Secretary of State Cdl. Pietro Parolin, chided Salvini.

"I believe partisan politics divides, but God belongs to everyone," Parolin commented to reporters in Rome on Sunday. "Invoking God for oneself is always very dangerous."

Salvini was also criticized by Cdl. Angelo Bagnasco, president of the Council of the Bishops' Conferences of Europe, who told the Italian media on Sunday that "acceptance and integration are essential values of the Gospel" and have "no color."

Even stronger criticism of Salvini came from the head of the judicial affairs panel of the Italian Bishops' Conference, Bp. Domenico Mogavero. According to the bishop of Mazara del Vallo, a port in western Sicily, neither Salvini nor his supporters can call themselves Catholic because they don't support the unrestrained influx of Muslim migrants.

Taking exception to Salvini brandishing a Rosary, Mogavero told reporters on Monday, "We can no longer allow (people) to appropriate the sacred signs of our faith to peddle their inhuman, anti-historic views, diametrically opposed to the Gospel message."

He added, "Those who are with him cannot call themselves Christian because they have reneged on the commandment of love."

Those who are with him cannot call themselves Christian.

Salvini couldn't even get a parchment conveying the Pope's blessing, according to Almoner of His Holiness Cdl. Konrad Krajewski. Speaking with Italian media earlier this month, Krajewski singled out Salvini as someone banned from receiving a blessing.

"But we do not give these to everyone," confirmed Krajewski. "Could we ever give one, just as an example, to a hospital where abortions take place? Or can we give one to certain characters in Venezuela who are asking us for one? No, certainly not."

"As another example, if Salvini asked us for one, we would deny it," said the cardinal.

Judging by the size and enthusiasm of the crowds, however, Salvini has the fervent support of many of his countrymen as do other populist leaders in Europe.

Macron: can’t get outside his palace without full military-style protection because Yellow Vests protestors want to bring him down.

One notable cardinal who agrees with Salvini's populist position on Muslim migration is Cdl. Raymond Burke. Speaking at the Roman Life Forum on Friday, Burke warned that opposing mass migration is a praiseworthy act of patriotism.

"So to be opposed to large-scale Muslim immigration is … a responsible exercise of one’s patriotism," said Burke.

Salvini is onboard with the same policy on Islamic migration already implemented in Hungary, Poland and other countries led by populist leaders.

Watch the panel discuss the popularity of leaders who are resisting unrestrained influx of Muslims in The Download—Signs of Hope in Europe.